To protect the health and safety of the public and our employees, DOAG has limited the number of employees at our 450 Columbus Blvd office and as such, mail and messages may receive a delayed response. Please use our online services and email specific COVID-19 related issues to agr.covid19@ct.gov 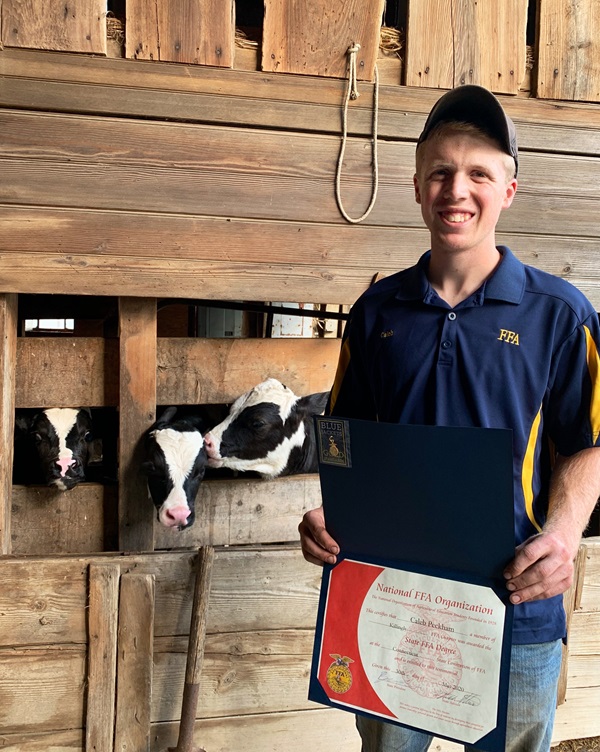 (HARTFORD, CT) – Cheers erupted in Caleb Peckham’s home on October 27, opening night of the 93rd National FFA Convention & Expo, as he was named the national winner in the Dairy Production – Placement Proficiency category. A seventh-generation dairy farmer from Woodstock, CT, Caleb graduated from Killingly FFA earlier this year where his SAE, or Supervised Agricultural Experience, focused on nearly all aspects of his family’s Elm Farm, home of a 150 Holstein and Jersey milking herd.

During his SAE, Caleb managed and assisted with milking cows, managing the calf barn, working with the herd nutritionist to develop balanced feed rations the herd and heifer program, selecting sires for the breeding program, and a variety of field work. In addition, he took on added responsibilities as the family began bottling their own milk and launched a retail farm store, Farm to Table Market.

After winning at the state level, he applied to the national contest where he was named one of four finalists earlier this year. Competing against finalists from Georgia, Tennessee and Ohio was daunting and not without hesitation.

“I was happy to be named a finalist, but to win is such a huge accomplishment,” he says. “To be recognized nationally is such an honor – to represent Connecticut and New England. Others don’t think of Connecticut for dairy production and it’s important to highlight that we are, just doing it differently.”

Now in his freshmen year at SUNY Cobleskill pursuing a degree in dairy production and management, Caleb is quick to credit his FFA advisors for their support, especially Bonnie Kegler. He shares, “Mrs. Kegler worked tirelessly with me on this – I wouldn’t be here without her.”

As someone who professes to “eat, sleep and breathe” farm life, this accolade is another step towards his long-term vision of producing a quality product for the local community to enjoy while helping the farm be sustainable and successful alongside his family.

This year’s national event was the first to be held virtually, however, it was still filled with excitement and prestige for all attendees. Twenty Connecticut FFA students received the American FFA degree, the highest achievement in the organization, demonstrating their dedication to their chapter and state organization, effort towards their SAE project, and outstanding leadership abilities and community involvement.

The mission of FFA is to make a positive difference in the lives of students by developing their potential for premier leadership, personal growth and career success through agriculture education. For more information, visit