2014 was proclaimed the Year of the Salamander by Partners in Amphibian and Reptile Conservation (PARC) to raise awareness for salamander conservation. The DEEP Wildlife Division participated in this effort by shining a spotlight on Connecticut’s native salamander species.

How Many Salamander Species Are Native to CT?

How Many Salamander Species Are Native to Connecticut?

The answer is 12! Six of Connecticut's salamanders are on the state's List of Endangered, Threatened, and Special Concern Species.

First of all, these two animals live in different habitats. Salamanders prefer cool, moist places, while lizards prefer dry, warmer places. A lizard’s body is covered with tough scales, while a salamander’s body is smooth and slippery. Most salamanders do not have claws on their feet, while lizards do. Although lizards and salamanders look alike, they are not closely related. Lizards are reptiles and are more closely related to snakes and turtles. Salamanders are amphibians, the same as frogs and toads. 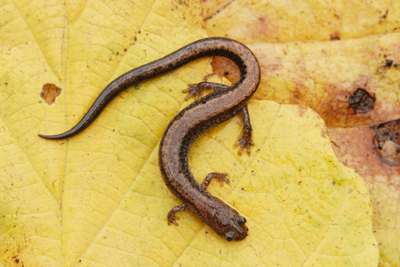 The redback salamander occurs in forested areas throughout Connecticut, sometimes in high numbers. It is an important food source for a wide variety of small vertebrates. This salamander does not have an aquatic larval stage; the young hatch fully developed from eggs deposited under logs and stones.

Why Are Amphibians Special?
Amphibians spend part of their lives on land and part in water. They have two life stages – a larval stage and an adult stage that are usually different from one another. The larval stage is typically aquatic, while the adult stage is typically terrestrial. Amphibians are cold-blooded, which means their body temperature is the same as the surrounding air, soil, or water. Amphibians can adjust their body temperature by choosing warm or cold places to rest. They become inactive when it is cold, but they can tolerate low temperatures.

Most amphibians have lungs. However, some species of salamanders do not have lungs, including Connecticut’s most-common salamander, the redback. All amphibians use their thin, moist skin to take in oxygen. Many breathe through gills, especially when in their larval stage. 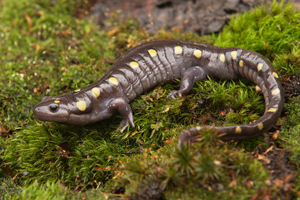 One of the surest signs of spring is the mass migration of spotted salamanders. These underground dwellers emerge from winter dormancy with the season’s first warm rains, and then travel to their breeding pools.

Why Are Salamanders Special?
All salamanders are carnivores. They eat insects, worms, small animals, and even other salamanders. With the help of their eyesight and good sense of smell, salamanders are able to find their prey.

Compared to the often noisy frogs and toads, salamanders are completely silent.

Salamanders have glands under their skin that produce mucus to keep the skin moist. Other glands make poisons that can be distasteful or harmful to predators. A salamander’s bright colors warn predators that it is probably distasteful or poisonous.

Most salamanders lay eggs. Because these eggs do not have shells, they must be laid in water or in moist places. The eggs are laid in a mass, string, or individually. The larvae that hatch from the eggs look similar to tadpoles. However, tadpoles have large round heads, while larval salamanders have long, narrow heads. Tadpoles have two gills that are hidden within gill slits and are not obvious. Salamander larvae have visible gills. 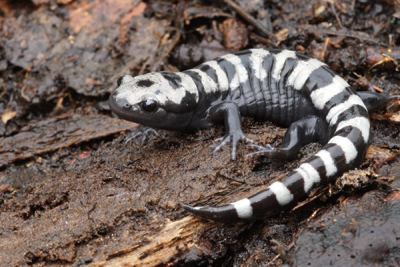 Where Do Salamanders Live?
People rarely see most salamanders. That is because, as adults, salamanders spend most of their time in forested areas, living under rocks and fallen logs or in underground burrows. The best time of year to see these creatures is in spring when they move to wet areas to lay their eggs. These wet areas include ponds, ditches, marshes, meadows and a special, but little known habitat, called a vernal pool. There are many types of vernal pools, but generally a vernal pool is a low spot in a forest or meadow that fills with water during winter and spring and then dries out by late summer. It can be big or small. Because these pools are temporary, fish cannot survive in the pools, thus the eggs and hatching larvae of salamanders are safe from fish predation.

The greatest threat faced by Connecticut’s salamander populations is the loss of habitat. Habitats are usually destroyed during development or are degraded by pollution (i.e., overuse of fertilizers and pesticides), increasing habitat fragmentation, and the introduction and invasion of non-native plants.

Several species of native salamanders are currently experiencing a long-term decline, and four are on Connecticut’s list of Endangered, Threatened and Special Concern Species. Many salamander species are localized and restricted to specific habitat types. Unfortunately, when these habitats are destroyed, the salamanders found there disappear too. Other than a few exceptions, salamanders do not relocate long distances to new habitats. Even if suitable habitat is located nearby, migration is very difficult due to the numerous roads that dissect across Connecticut. When these slow-moving creatures cross roads (particularly during spring migration to breeding pools), hundreds are killed by cars.

Make an effort to learn more about salamanders and take actions to conserve these special creatures. Following are some suggestions:

Where Can You Learn More About Salamanders?