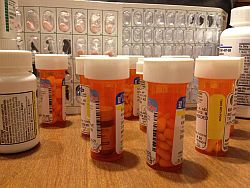 On December 2, 2008, EPA public noticed a proposal  to add hazardous pharmaceutical waste to the Universal Waste Rule  (UWR) that was originally promulgated on May 11, 1995.  The UWR modified the Resource Conservation and Recovery Act’s (RCRA) hazardous waste regulations (40 CFR Parts 260 through 265) by providing streamlined requirements for the collection, management and disposal of a group of hazardous wastes that are widely produced by many different types of businesses.  EPA’s 2008 proposed rule was meant to facilitate the appropriate management and disposal of hazardous pharmaceutical wastes.  Due to extensive and conflicting comments , and concern over the lack of notification and tracking requirements, EPA decided to not finalize the 2008 proposal.  Instead, developed a new proposal for the sector-based management of hazardous waste pharmaceuticals which may not be as flexible as a universal waste designation.

Before 2008, DEEP has been actively working on the issues surrounding the proper management and disposal of hazardous waste pharmaceuticals.  The Department provided comments  to EPA in favor of their December 2008 proposal to add hazardous waste pharmaceuticals to the UWR.  The Department is now advocating for change through a State-initiated universal waste listing.  However, until promulgation of the proposed regulations, generators of hazardous pharmaceutical waste must manage such waste in accordance with Connecticut’s Hazardous Waste Management Regulations.

Connecticut and Other States Universal Waste Regulations and Policies