Summer Outdoor Journey
Clebrate the past, present and future of Connecticut State Parks!
The 2014 Centennial SoJourn (Summer Outdoor Journey) begins August 9 at American Legion State Forest, Barkhamsted and finishes at Harkness Memorial State Park, Waterford on August 15.
This biking, paddling, and hiking adventure showcases 10 of Connecticut’s state parks and forests. The SoJourn will be experienced by a core group of 30 outdoor enthusiasts who will camp along the way as they travel across Connecticut.
There will a number of SoJourn activities along the way that will be perfect opportunities for families to get outside and join the Centennial celebration.  List of Actvitites for the Public 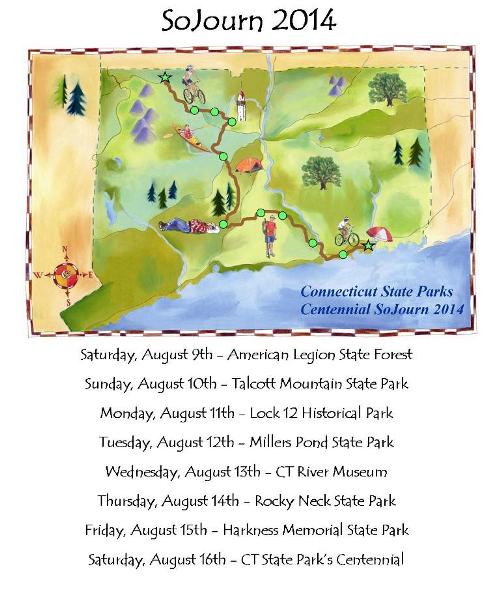 2013 Centennial SoJourn
The 2013 SoJourn began Thursday, August 15, 2013 and ended on Sunday, August 25, 2013.  The SoJourn was an 11-day, 195 mile trek across Connecticut – from Quaddick State Park in Thompson to Sherwood Island State Park, Westport – by bike, by kayak and on foot.  There was a “core” group for the 2013 SoJourn – approximately 20 people, including 4 children ages 11-15, who participated in this journey from start to finish.
View 2013 Daily SoJourn Routes and Maps
The “core” group travelled about 20 miles/day.  Most of the route was done by bike, but they also paddled down the Connecticut River, rode the Essex Steam Train, hiked, and camped along the shores of the Connecticut River, on the beaches of Long Island Sound and at Beardsley Zoo.
At the final destination, Sherwood Island  – Connecticut’s first state park – a celebration was held to recognize everyone who completed the journey and kick-off the next phase of the State Parks Centennial Celebration.
Many people joined the group along the way to help celebrate 100 years of Connecticut State Parks!
For more information contact Diane Joy, DEEP State Parks - 860-424-3200.
Content last updated August 2014