(Changes from 2021 are highlighted in bold. All Dates Inclusive - Except Sundays)

North Zone: The portion of the state north of Interstate 95
South Zone: The portion of the state south of Interstate 95.
Shooting Hours: One-half hour before sunrise to sunset, except for the September Goose Season, when shooting hours end one-half hour past sunset. (Sunrise-Sunset-Tide Table)
Legal Firearms: The only legal firearms that can be used to hunt migratory birds (except crows) in Connecticut are shotguns 10 gauge or smaller. Waterfowl, rails, and coots can only be hunted using non-toxic steel shot no larger than BB steel, or Bismuth-tin alloy (97% bismuth and 3% tin), Tungsten Polymer, or tungsten iron shot or tungsten-matrix (95.9% tungsten: 4.1 % polymer), tungsten-nickel-iron (Hevishot), or any other non-toxic shot approved for use by the U.S. Fish and Wildlife Service no larger than number two. There are no non-toxic shot requirements for hunting woodcock, snipe, or crows. However, hunters are urged to consider using non-toxic loads while hunting these species.

Notes for the Waterfowl Seasons:

A Includes all species of ducks (including seas ducks), with the following restrictions: SCAUP: see table. MALLARD: daily limit 2 and may include only 1 HEN. WOOD DUCK: daily limit 3. BLACK DUCK: daily limit 2. REDHEAD: daily limit 2. PINTAIL: daily limit 1. CANVASBACK: daily limit 2. Possession limits are three times the daily bag limit. SEASON FOR HARLEQUIN DUCKS IS CLOSED. (NOTE: In the printed version of the 2022-2023 Connecticut Migratory Bird Conservation Guide, the limit for HOODED MERGANSER is incorrectly listed as 2 under this section. See "B" below for limit details on mergansers.)

B All merganser species are included in the aggregate duck bag of 6. There is no species specific bag limit for mergansers.

C SEA DUCKS ARE INCLUDED IN THE TOTAL DUCK BAG. Daily limit for sea ducks is 4 and may include no more than 3 SCOTERS, 3 OLDSQUAW, 3 EIDER (1 hen), 12 in possession.

F AFRP Unit: All of the rest of the state not included in the AP or NAP descriptions.

G NAP-H Unit: That part of the state east of a line beginning at the Massachusetts border in Suffield and extending along Route 159 to its intersection with I-91 in Hartford and then extending south along I-91 to State Street in New Haven. South along State Street to Route 34. West on Route 34 to Route 8 to Route 110, south along Route 110 to Route 15, north along Route 15 to the Milford Parkway, south along the Milford Parkway to I-95, north along I-95 to the intersection with the east shore of the Quinnipiac River, south to the mouth of the Quinnipiac River and then south along the eastern shore of the New Haven Harbor to the Long Island Sound.

H The portion of the South Zone east of the Quinnipiac River.

Special September and late Canada goose seasons will again be offered, and no special permit is required for either season. The early season in the North Zone will begin on September 1 and run through September 30. In the South Zone, the season will begin on September 15 and end on September 30. The daily bag limit for the early season is 15, with a possession limit of 45. Shooting hours for the September season are one-half hour before sunrise to one-half hour past sunset, and unplugged shotguns are legal to use. All September goose season hunters must have a federal Duck Stamp and a 2022 Connecticut Migratory Bird Conservation Stamp, which includes the HIP permit.

The late goose season is from January 16, 2023, to February 15, 2022, in the South Zone only (east of the Quinnipiac River). All late season goose hunters must have a federal Duck Stamp, 2023 Connecticut Migratory Bird Conservation Stamp, and 2023 hunting license. 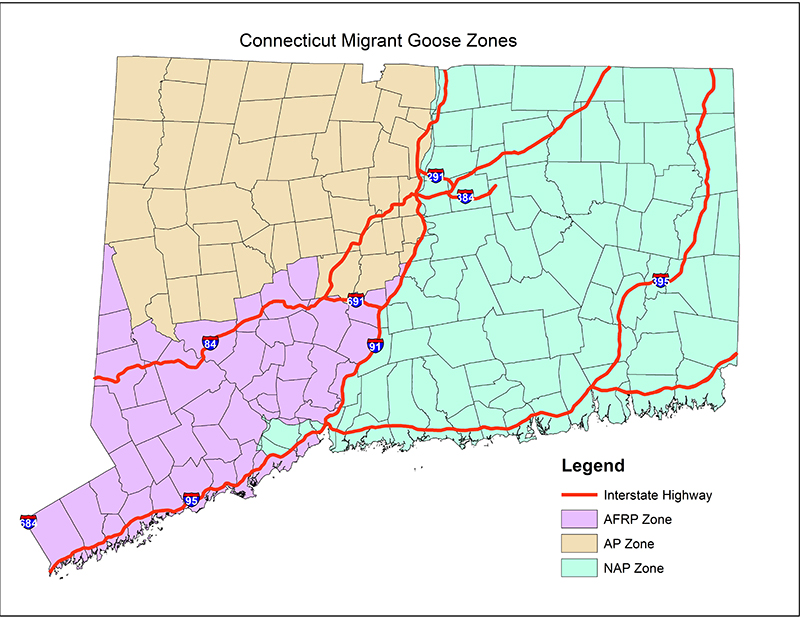 Map showing the intrusion of the NAP Zone into the AFRP Zone. 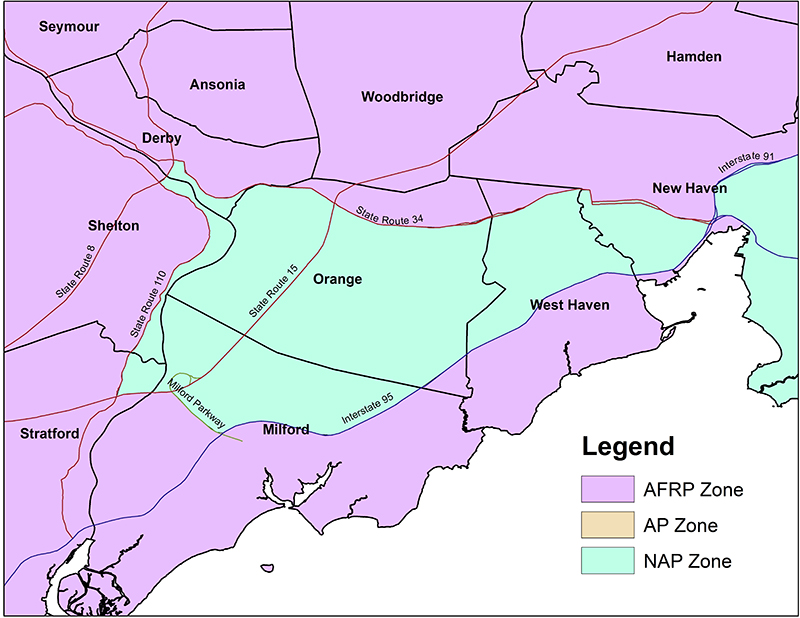 While crow hunting from a stationary position, a hunter is exempt from the fluorescent orange clothing regulation.

Daily and Possession Limits: No Limit

The daily bag limit for black ducks is two. Black duck hybrids are classified as black ducks. This should reduce the chances of a mistake and any confusion in the field.

The best way to distinguish between black ducks and black duck/mallard hybrids is to look at the feathers above the wing speculum. Black ducks have no white coloration above the speculum (see images below).

Black Duck Wing
Black feathers surrounding the blue speculum with no evidence of white above the speculum. 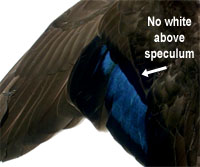 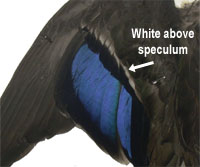 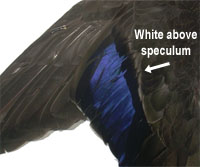 Connecticut will hold 2 statewide junior waterfowl hunter training days on Saturday, October 1, 2022 and Saturday, November 5, 2022. Junior hunters (ages 12 to 15) must have a valid small game junior hunting license and a 2021 Connecticut Migratory Bird Conservation Stamp (which includes the HIP permit) and be accompanied by an adult at least 18 years of age. Sixteen and 17-year-old hunters can participate in the training days, but they must have a valid hunting license, a 2021 Connecticut Migratory Bird Conservation Stamp, and a federal 2021-2022 Migratory Bird Hunting and Conservation Stamp. Adults must possess a valid hunting license; however, they are not allowed to carry a firearm. Ducks, geese, mergansers, and coots may be hunted. Bag limits and shooting hours are the same as for the regular duck and goose hunting seasons. (The Junior Hunter webpage contains more details about Junior Hunter Training Days and Events.)

The Connecticut Waterfowl Association (CWA) sponsors a Waterfowl Hunter Mentoring Program, which pairs up experienced volunteer mentors with youths and adult novice waterfowl hunters. The goal is to encourage new participants in this great sport, who will then appreciate and help conserve our waterfowl resources. The mentors also have the opportunity to give back to the resource they cherish. Mentors of youths are able to enjoy all aspects of waterfowling (except shooting) during the two Youth Waterfowl Hunter Training Days offered each season when only youths can hunt. More information on this program can be found on CWA's website. (Read an article in the March/April 2014 issue of Connecticut Wildlife magazine about CWA's waterfowl mentoring program.)

Three distinct populations of Canada geese are present in Connecticut during fall, winter, and early spring – the Atlantic Population (AP), North Atlantic Population (NAP), and Atlantic Flyway Resident Population (AFRP). The AP nests in northern Quebec and winters from Massachusetts southward to North Carolina, although primarily in the Chesapeake region of the Atlantic Flyway. The NAP breeds in the Canadian Maritime provinces and western Greenland, and winters primarily in southern New England and eastern Long Island. The AFRP geese breed throughout Connecticut, but are at their highest densities in the more urbanized areas of the state where hunting exposure is low.

As AFRP goose numbers began to expand throughout Connecticut, so did the number of nuisance complaints. As such, Connecticut was the first state in the nation to establish a season specifically designed to harvest AFRP geese while ensuring a minimal harvest of migrant Canada geese. This special late season began in 1986 and continues today, with minor modifications, in the South Zone. A similar September season was established in 1996 to target AFRP geese before migrant geese arrive in the state. These special seasons are monitored through the analysis of band recovery data and neck collar observations.

The status of migrant goose populations drives the regular goose season regulations in the Atlantic Flyway. In 1995, the U.S. Fish and Wildlife Service (USFWS) closed the regular Canada goose season in the Atlantic Flyway because the AP breeding pair estimate declined to such low levels that it was evident that the AP could not support any sport harvest. The AP season was closed in Connecticut until 1999. The presence of large numbers of NAP geese in New England led to the initiation, in 1998, of migrant Canada goose hunting once again in Connecticut. This season was only offered in certain areas of the state and targeted NAP geese. 1998 marked the first year that the USFWS separated the AP from the NAP during regular goose hunting seasons. In Connecticut, band return data and neck collar observations indicate that AP geese occur primarily in Litchfield County and western Hartford County, whereas NAP geese tend to be found east of the Connecticut River, predominantly in Windham and New London Counties. Thus, due to the presence of 3 different goose populations in Connecticut, the state has been divided into 3 goose hunting zones, each with different regulations, based on the status of the population and the overall management goal for each population. As data are compiled and analyzed, changes are made accordingly.