The Southern Pine Beetle in Connecticut 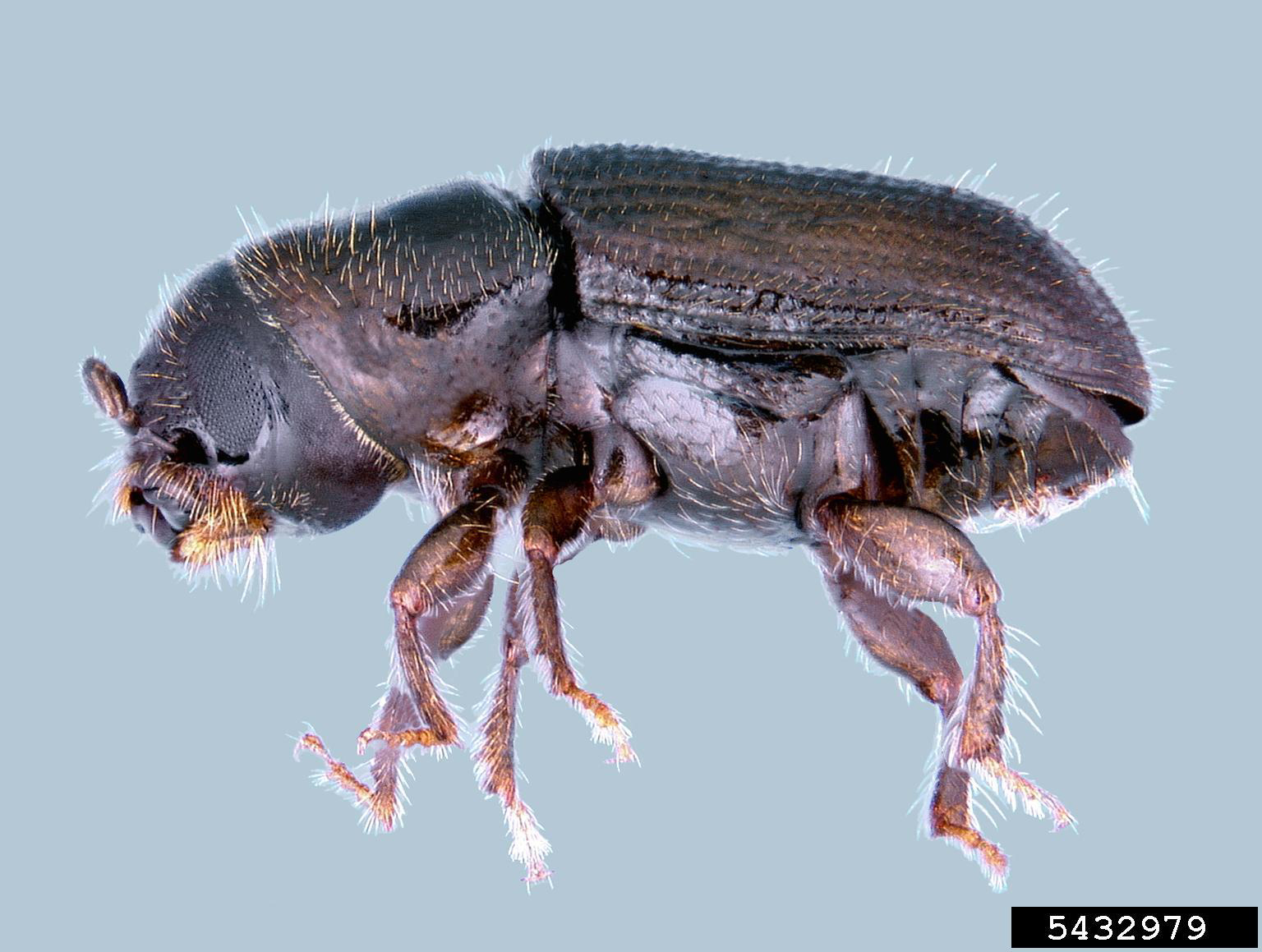 Biology and Life Cycle (learn more about the insect)

The Pines (learn more about the trees it attacks)

Management of SPB in Connecticut (what is being done now?)

Report a Suspected Find of SPB

The southern pine beetle (SPB) is a small insect, only about 1/8 of an inch in length. It is the most economically destructive insect in the southeastern United States. Until recently, it was considered to be restricted largely to the southeastern states. In 2009, it was found in New Jersey Pine Barrens and, in late 2014, in extensive pine stands on Long Island. In 2015, it was found in Connecticut.

Beetles that bore into the bark of pine trees and feed on the inner bark or on the cambial layer between the bark and the wood are not that unusual. What sets SPB apart is its tendency to go periodically into outbreak mode. When the population builds up to large numbers, it can attack and kill even healthy trees, creating large stands of dead trees. This is why it is so economically devastating down South, as many of the trees it attacks are of high commercial value, such as loblolly and shortleaf pine.

In Connecticut, SPB is of concern because it is known to attack pitch pine. Pitch pine makes up a low percentage of the state's forest. It is most commonly encountered on ridge tops and in other areas where the soils are dry and sandy. The presence of pitch pine is characteristic of a type of forest habitat known as "pitch pine / scrub oak woodlands". This habitat developed on sandy outwash soils left by glaciation. As these same soils make great building sites, it is estimated that over 95% of the state's pitch pine - scrub oak woodlands have been lost. SPB may threaten the rare pitch pine stands that remain. 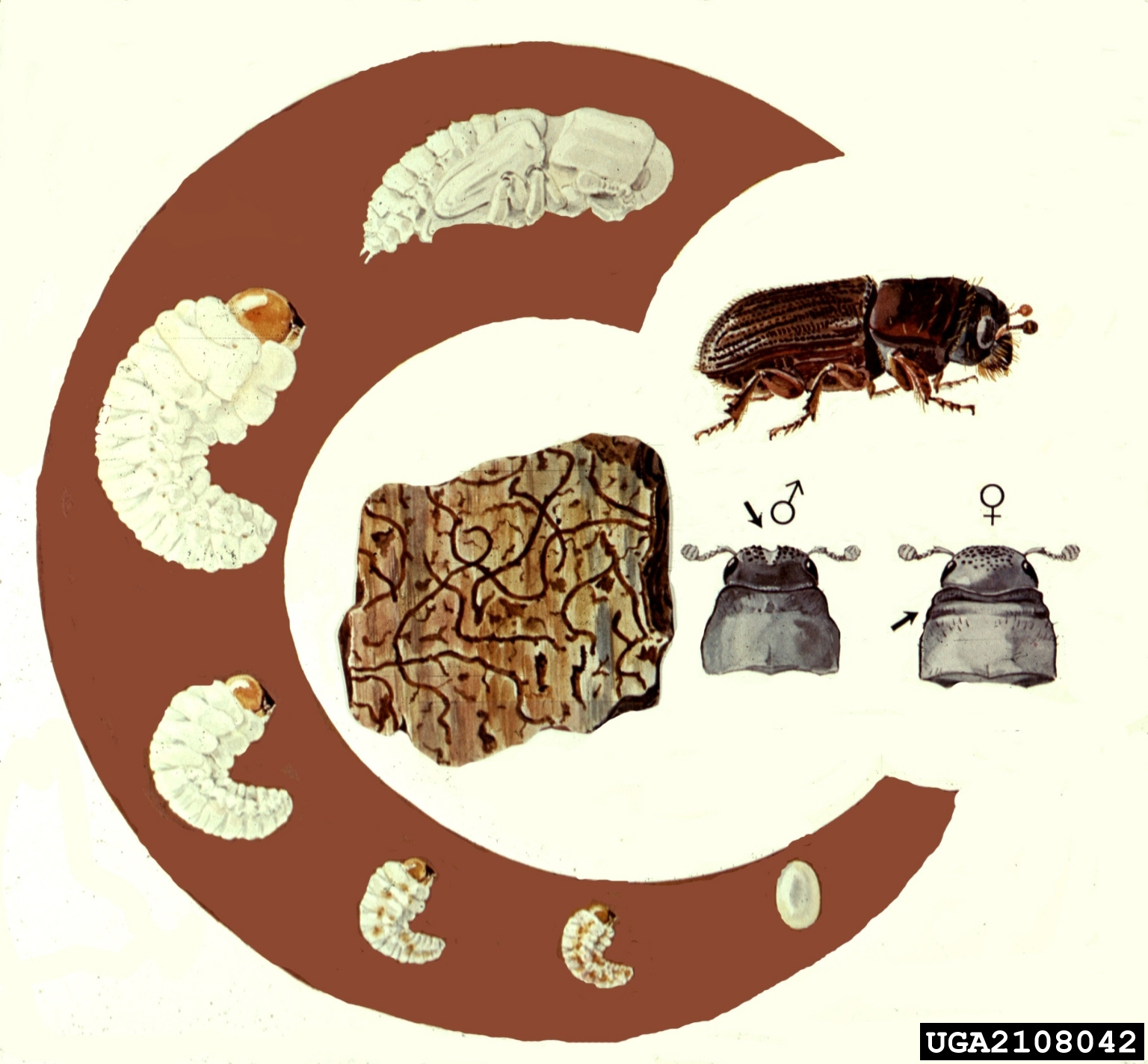 Being a beetle, SPB undergoes a complete metamorphosis during its lifetime. This means it goes from egg to larva to pupa to adult. The larval stage is the feeding stage, during which the insect does most of its damage. The adult stage is where dispersal and reproduction occurs. It is also in the adult stage that the beetle carries a blue-stain fungus, a key feature of the insect's destructive capability. 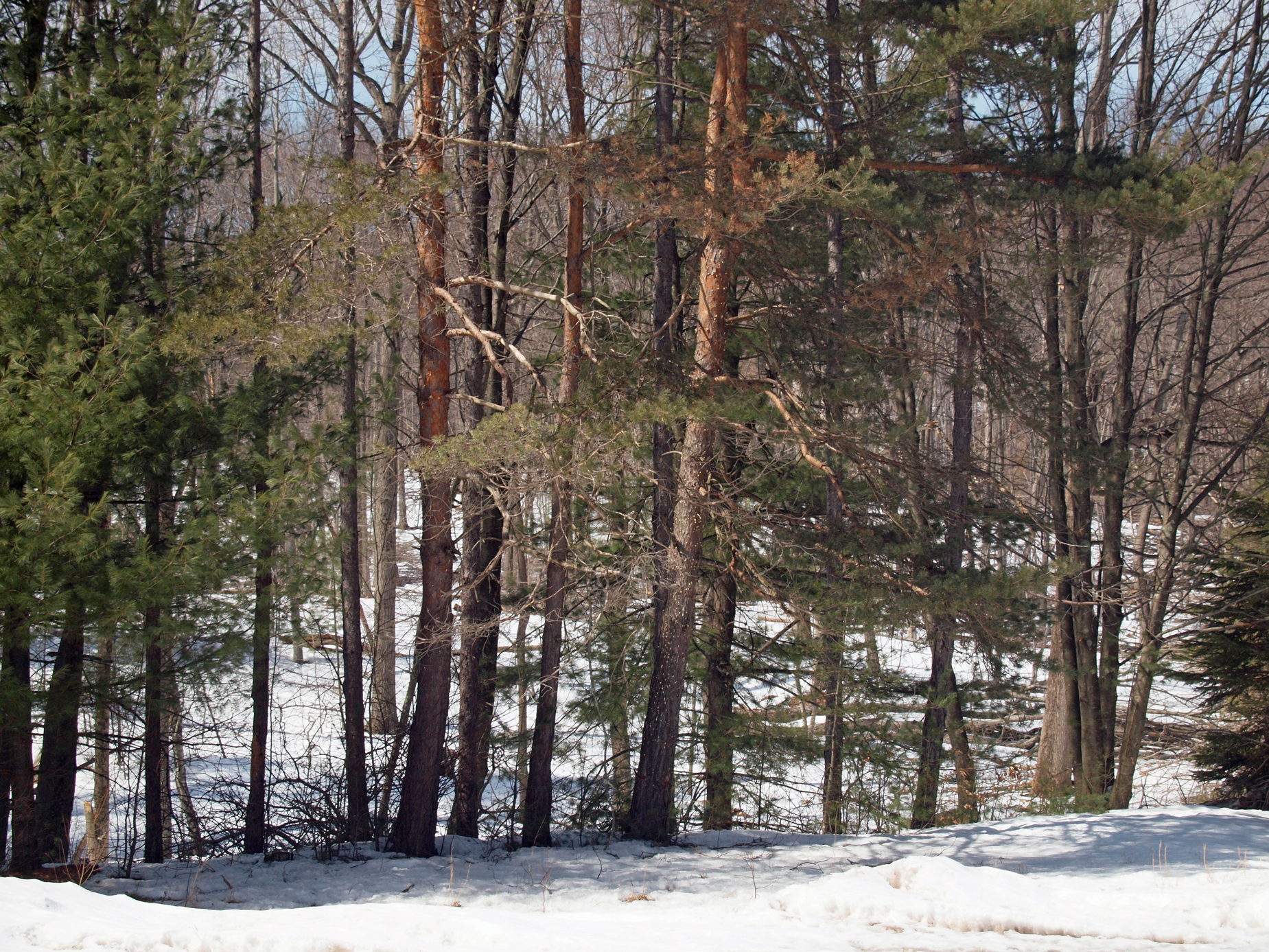 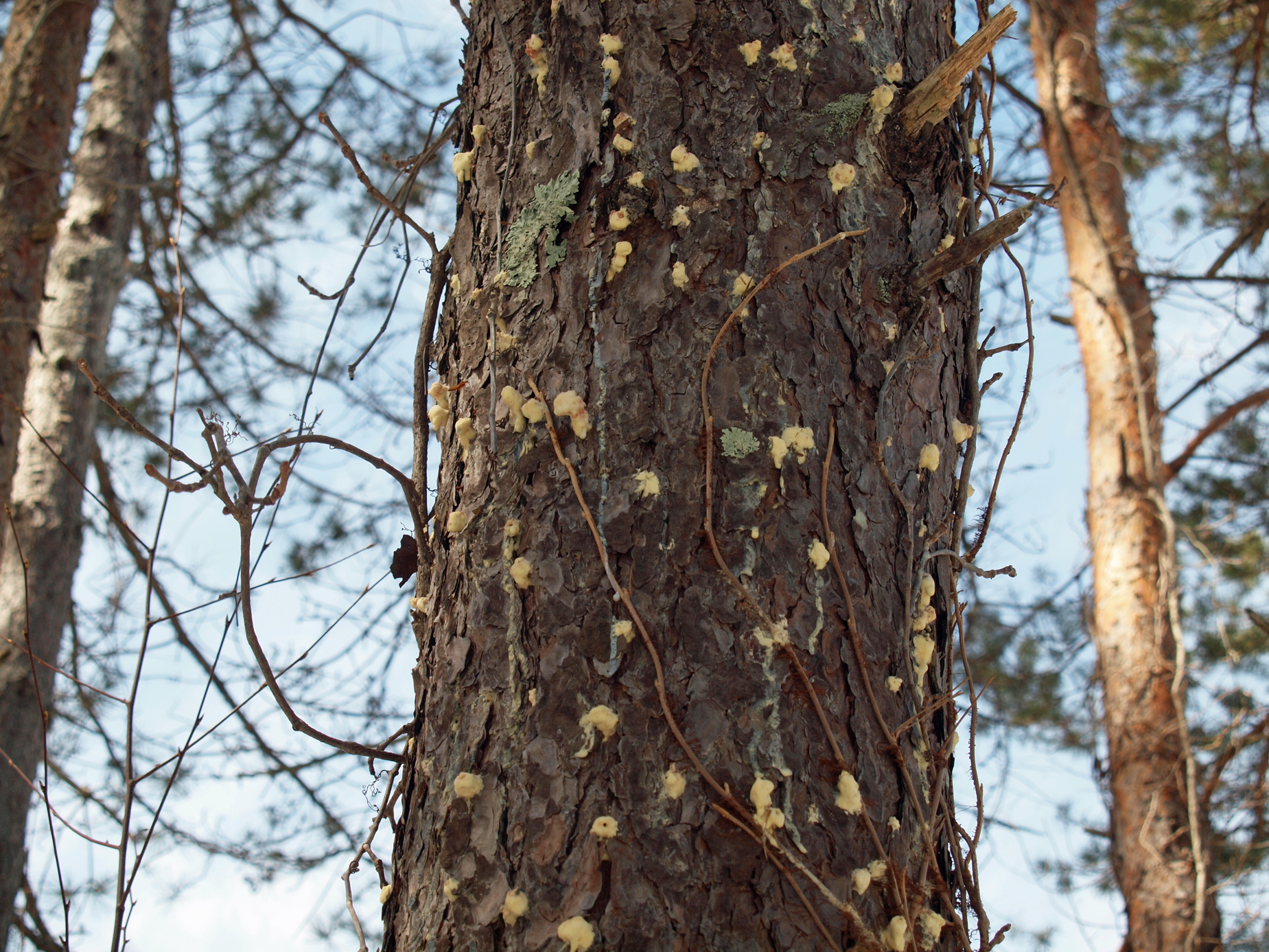 Attacks by SPB are initiated by individual females. Once she finds a suitable tree, she releases an aggregation pheromone that attracts both female and male beetles. As the insects gather, the females bore into the bark. This triggers the tree to produce resin in an effort to "pitch out" the invading insect, essentially drowning it in resin. Through this technique, healthy trees are often able to resist an attack. However, if the tree is weakened or the beetles are in sufficient numbers, the SPB can succeed in overwhelming the tree. In the end, a successful attack will kill a tree, although not immediately. 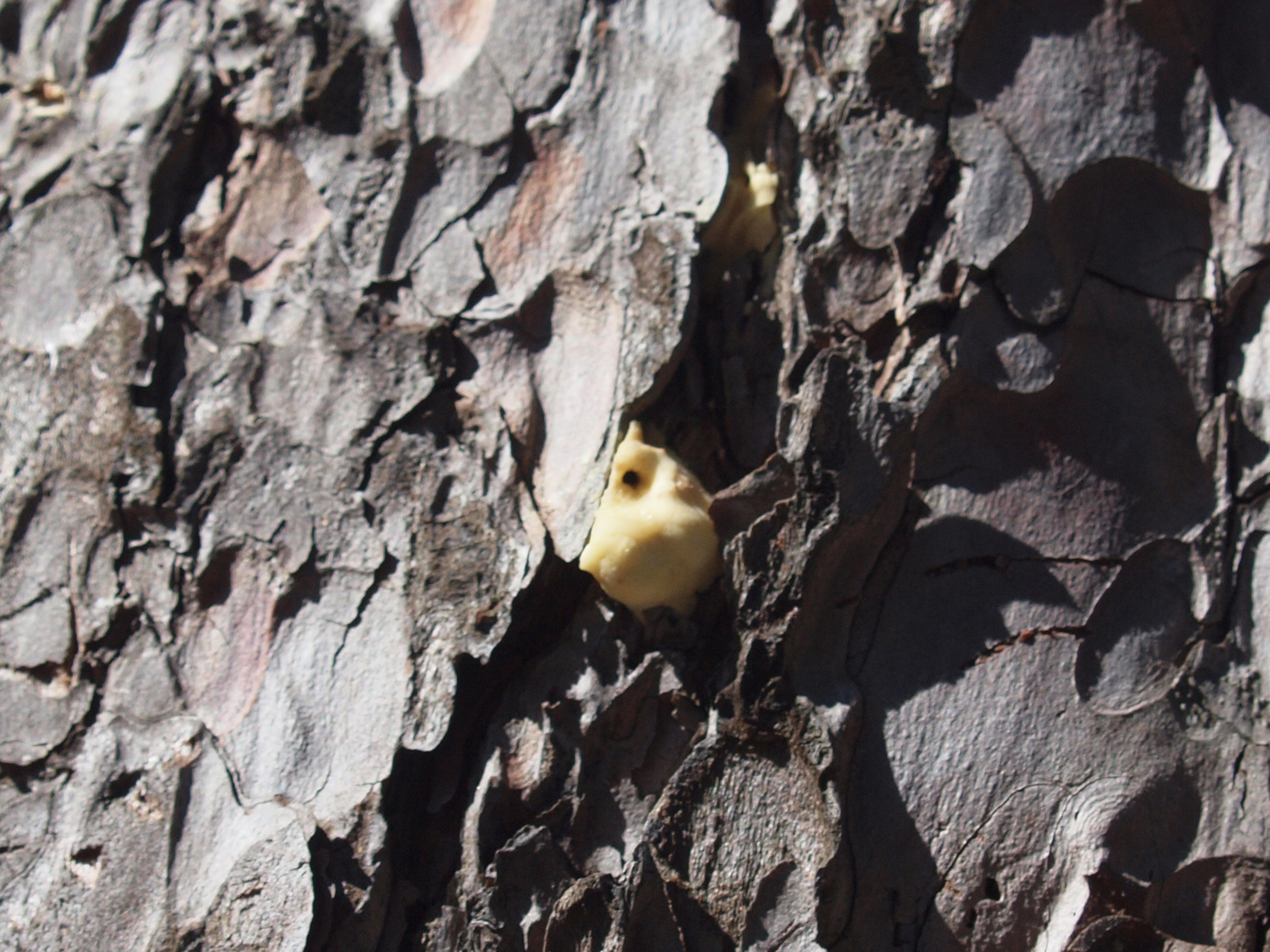 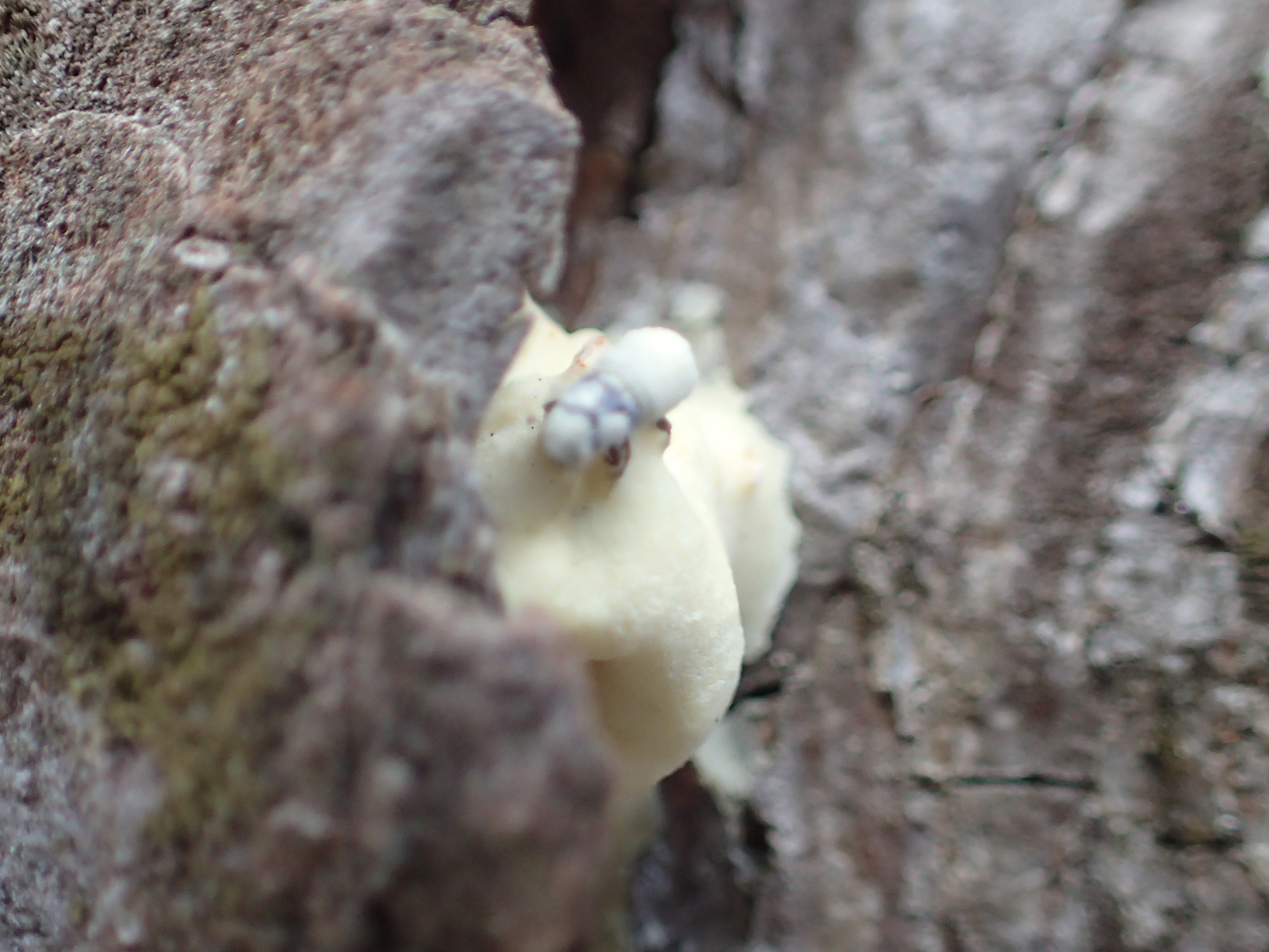 Once beneath the bark of the tree, the female mates and constructs characteristic S-shaped galleries, with eggs laid in the sides of the galleries as she moves along. As she moves through the tree, she is inoculating the tree with a blue-stain fungus. This fungus, which then grows within the sapwood of the tree, helps in providing food for the developing larvae. The fungus also contributes greatly to the death of the tree as it blocks the circulatory system within the tree.

Gallery on the inside of the bark

In warmer parts of the United States, SPB may have six or more generations per year and can overwinter in all life stages. At its northern fringes, it is not yet known how many generations may occur in the course of a single growing season. It is also not yet known what life stages are able to survive the winter in places such as Connecticut, although the late instar larvae appear to be the life stage that is most cold-hardy. 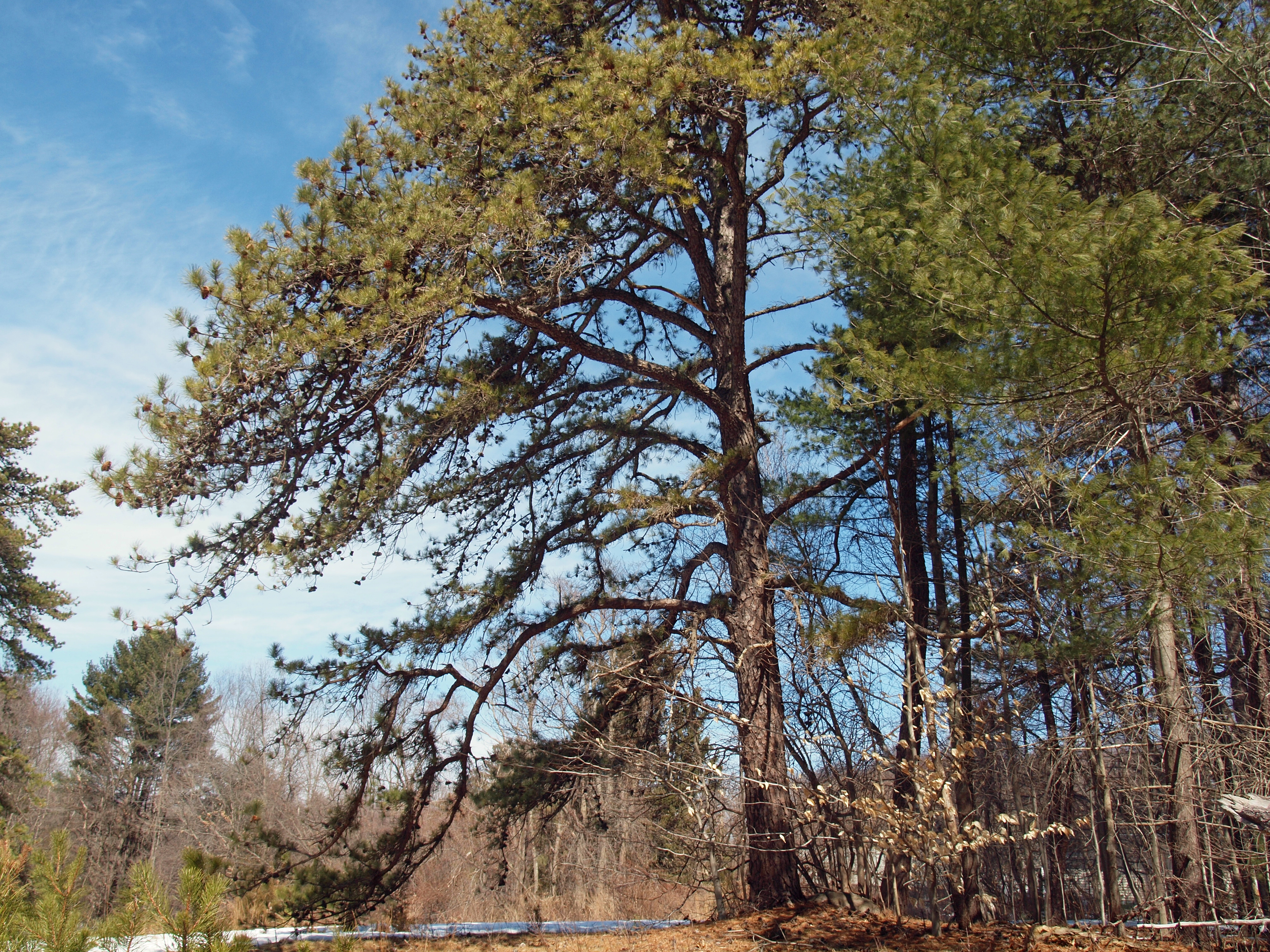 Connecticut has two major native pines - the eastern white pine and pitch pine - as well as several species of pine that are commonly planted, including Scotch pine, Austrian pine and Japanese black pine. A small part of red pine's host range is in northwestern Connecticut, although, even there, it is uncommon. Red pine was previously planted widely throughout the state as a potential timber tree. Almost all of these plantation red pines have been removed over the past forty years due to severe pest problems.

The pines are often categorized based on number of needles per fascicle, or bundle. Eastern white pine is a five-needled pine, while pitch pine is a three-needled pine and red pine, Scotch pine, Austrian pine and Japanese black pine are all two-needled pines.

It is also common to lump the two- and three-needled pines together and term them "hard pines" while calling the white pines "soft pines". This is a reference to a characteristic of the wood. In general, SPB tends to be found primarily on the hard pines.

So far, SPB has been found in Connecticut in Scotch, red and pitch pines, with the vast majority of the finds in Scotch and red pines. It has not yet been found in eastern white pine, although it has been found in this species in outbreaks in other parts of the country, including on Long Island.

In Connecticut, eastern white pine is a very important tree, as it ranks fourth on the list of tree species in the state by volume and fifth by number of trees greater than one inch in diameter (Source: USDA Forest Service FIA). Pitch pine is relatively rare (much less than 1% of the state's forests), which is why habitat such as the pitch pine / scrub oak woodland is significant.

Management of SPB in Connecticut 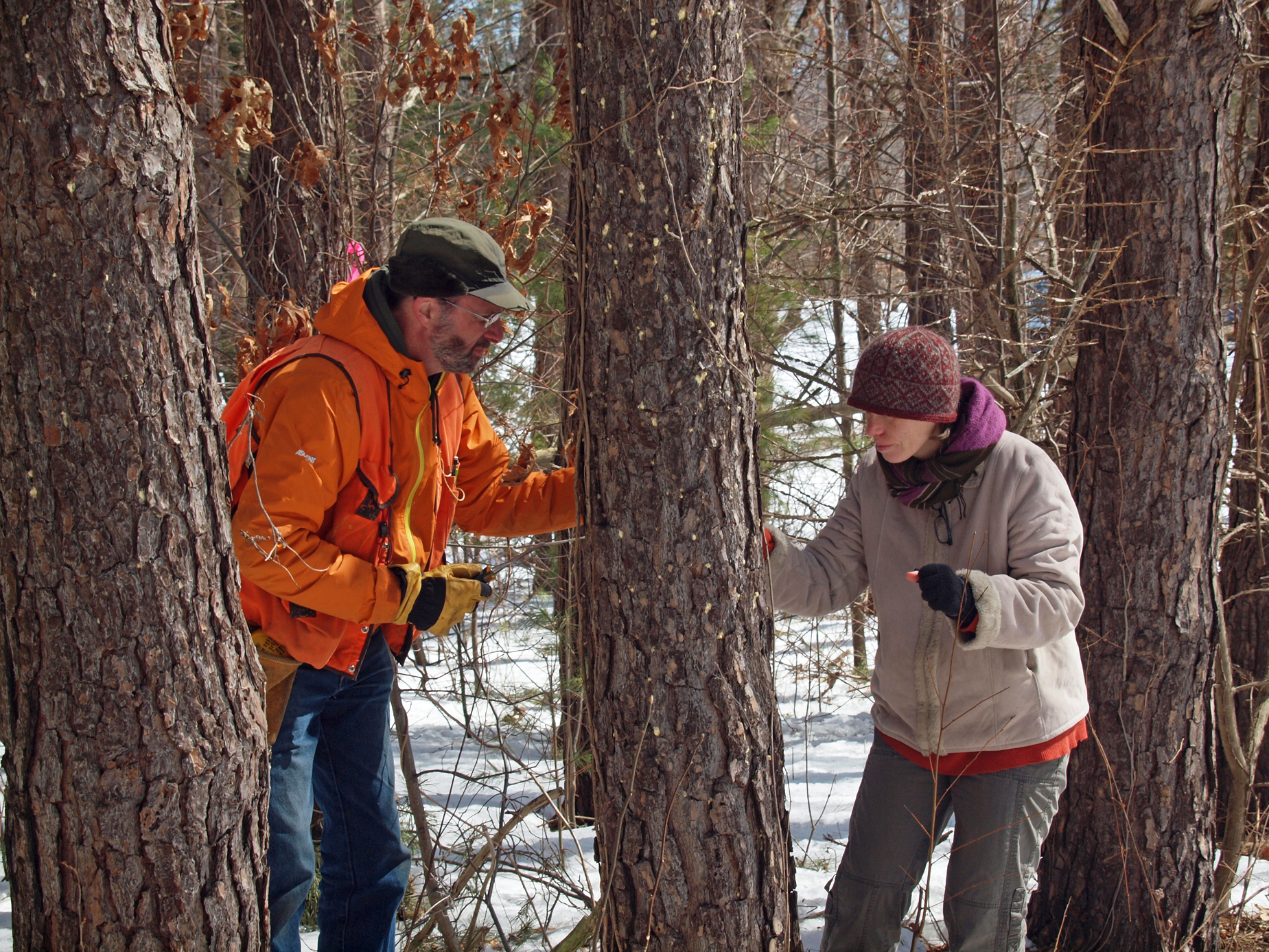 The first confirmed find of SPB in Connecticut occurred on March 17, 2015 from red pine trees planted at Wharton Brook State Park in Wallingford. Since then, it has been found at several locations throughout the state - on red pines, Scotch pines and Norway spruce. At least one find on pitch pine has occurred, from a stand of pitch pine in North Haven.

SPB is not a species of federal regulatory concern. In this way, it is different from the emerald ash borer and the Asian longhorned beetle. There are extensive regulatory restrictions associated with each of those insects that do not apply to SPB.

Both the DEEP Division of Forestry and the Connecticut Agricultural Experiment Station (CAES) are very interested in limiting the spread and discouraging any population increase of this insect. Currently, CAES is in the process of ascertaining how wide-spread this insect is in the state. This is being done through encouraging reporting of finds of the insect, and through trapping and field surveys. Sensitive habitats such as extensive stands of pitch pine will be a high priority for monitoring. As SPB is found, this information will be shared so that natural resource professionals can be aware of the presence of the beetle.

The experience of foresters in the southeastern United States will be of great value in providing guidance relative to forest management in the presence of SPB. Generally speaking, managing a stand for the health of individual trees appears to be the best way to keep SPB in check. In stands of pitch pine, thinning to release pitch pine crowns from competition might be the best way to protect pitch pine from outbreak attacks of SPB.

For landscape trees, arboricultural recommendations include the use of bark drenches to prevent the successful attack of the tree when the beetle is in outbreak mode. For trees that have already been attacked and the blue-stain fungus introduced into the sapwood, they cannot be saved as there is no treatment for the fungus.

Arborists, tree care workers, Christmas tree growers and others are encouraged to use proper sanitation when working with blue-stained wood. Equipment such as hand saws should be cleaned. There are suggestions that the fungus can be carried to healthy trees by infested tools.

Wood from beetle infested or killed trees can be used in solid-sawn form, provided the tree has been debarked to remove any remaining beetles. The blue-stain fungus is not a decay fungus and does not weaken the wood. It may, however, decrease the appearance value of that wood.

At the moment, the best recommendation is to chip any infested trees on site and remove the chips produced off-site, at some distance from any potential host trees. It is considered unlikely that many beetles would survive the chipping process. Double-chipping and composting would help further diminish the likelihood that the beetles would survive.

Report a Suspected Find of the Southern Pine Beetle

To report a suspected find of SPB, please contact the CT Agricultural Experiment Station at 203-974-8474 or ctstateentomologist@ct.gov

If you have questions or would like additional information, please contact the DEEP Division of Forestry at 860-424-3630 or deep.forestry@ct.gov