This 3-inch juvenile yellow perch looks just like an adult, but is not brightly-colored.

Distribution. Native to much of Canada, the North Central and Northeastern United States, and the Eastern coastal states to South Carolina. Widely introduced elsewhere. Yellow perch are found in almost all lakes and ponds and larger streams in Connecticut, where they are typically common to abundant. 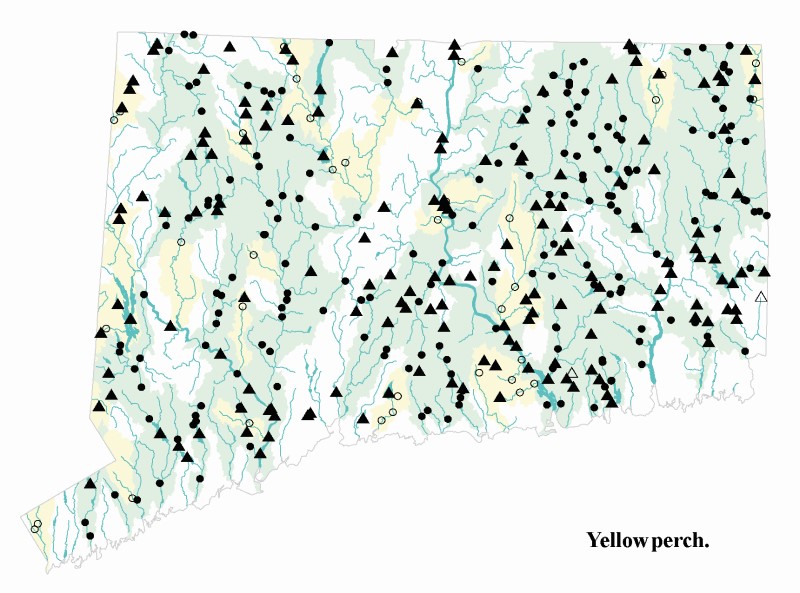 Habits. Schooling fish that are equally at home in open water and along shorelines. Yellow perch feed during daylight hours and are typically inactive at night. They can readily be caught on a variety of small lures and bait (such as jigs, minnows and worms). Yellow perch are easy to keep in home aquariums if started at a small size. Small yellow perch will accept pellets, but as they grow they require at least some fresh/live food. Perch are passive fish that hide in the presence of more aggressive species.

Comments. Yellow perch are one of the state’s most popular panfishes. They actively feed during the winter, making them a staple for ice anglers. They are also an important forage fish for large predators, such as bass and pickerel. They are one of the earlier-spawning fishes in Connecticut, depositing very distinctive and conspicuous curtains of pale yellow eggs that cling to underwater branches and shoreline vegetation during March and April.