Mullet fill a unique ecological niche because they are filter feeders of bottom muck and detritus. David Scott SREL photo.

Distribution. Worldwide distribution in tropical and temperate marine waters. Found from Nova Scotia south to Brazil in the Western Atlantic. Typically a more southern fish, striped mullet are most common in Connecticut estuaries and coastal streams during the summer. 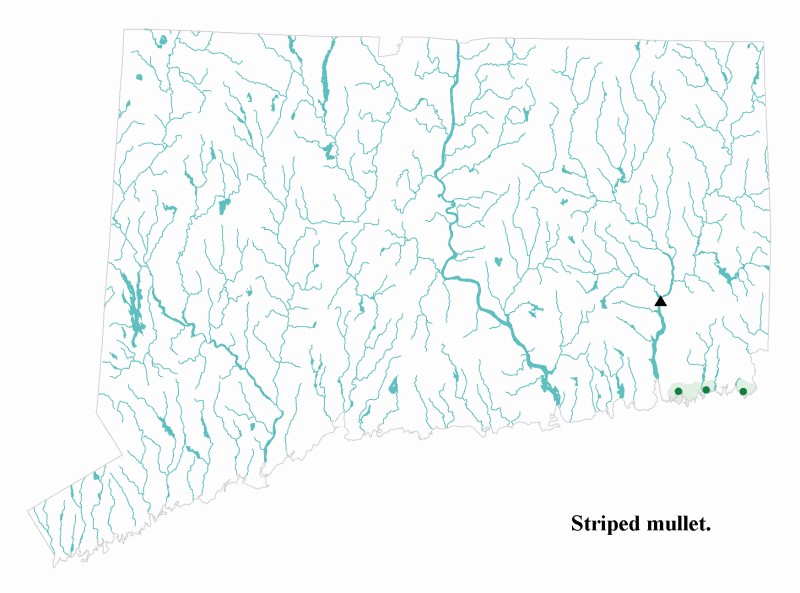 Habits. Typically travel in large schools near the surface, often in shallow water. Prefer inshore marine waters, but will sometimes travel long distances up freshwater rivers and streams. Striped mullet spawn offshore in large aggregations during winter. They fill a unique ecological niche because they are filter feeders of bottom muck and detritus. For this reason, they are taken only accidentally by angling. In areas where they are more abundant, they are often captured with cast nets.

Comments. Striped mullet support important commercial fisheries in Southern states. Smaller fish are sold as bait. Adults are prized both as a food fish and for their roe (eggs). Mullet are also important forage for large predators, such as sharks and dolphins. For unclear reasons, mullet often leap far out of the water.