Identification. Body elongate. More than 55 scales in lateral line. Notch between spiny and soft dorsal not as deep as largemouth. Second-to-last dorsal spine greater than half the length of the longest spine. Dorsal spines 10. Anal spines 3. End of jaw does not extend beyond rear edge of eye. Dark blotches on sides (may be faint or absent) may form vertical bars, but do not form a horizontal band. Typically dark brown, sometimes greenish on back, fading to brown, bronze or greenish on sides and cream-colored to gray on belly. Juveniles with dark bars or mottling. Tails of juveniles often reddish with a dark vertical band and a reddish margin.

Large adult smallmouth bass, such as this 18-incher, become thick-bodied.

Distribution. Native range is Central United States from the Great Lakes region south to Tennessee and Missouri. Widely introduced elsewhere in the United States and southern Canada. In Connecticut, smallmouth bass are present within suitable habitat in most drainages, where they are typically common in abundance. 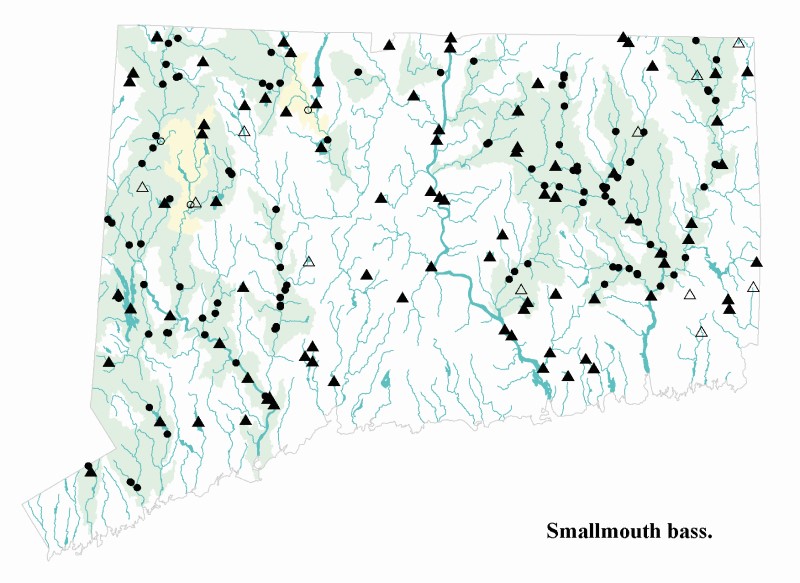 Habits. Smallmouth bass prefer more sparsely vegetated habitats, faster-flowing streams and rivers, and larger, clearer lakes than largemouths. They are aggressive feeders that can be taken by angling on a variety of baits and lures. Smallmouth bass are fairly easy to keep in home aquariums, but they are very aggressive. Juveniles can be taught to take prepared food, but they require at least some fresh food to thrive. They are not as tolerant of high water temperatures or poor water quality as largemouths.

Comments. Due to their hard-fighting abilities, smallmouths are considered by many to be superior gamefish to largemouths. However, smallmouth populations have dwindled and largemouths increased in some Connecticut lakes because smallmouths are less tolerant of eutrophic (increasingly fertile) conditions.

When in an aggressive mood, the smallmouth's markings can become highly contrasting.