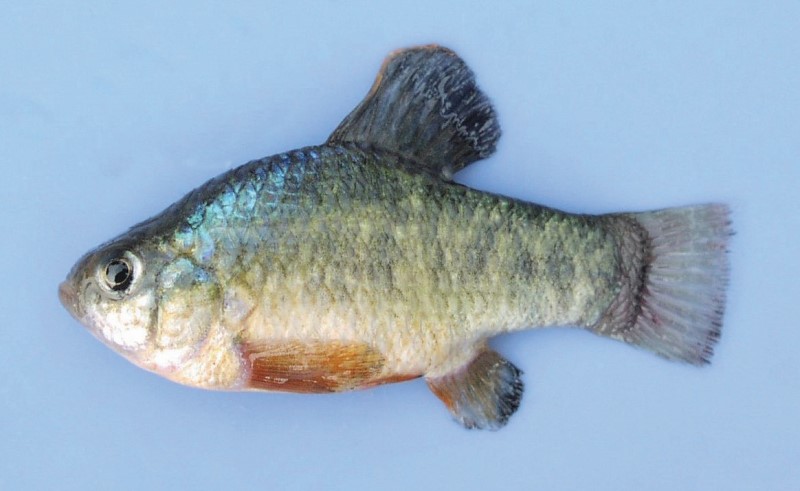 A 3-inch adult male sheepshead minnow. Note the thick body and iridescent blue on the back.

Identification. Thick, stubby body. Combination of dark bars and blotches. End of pectoral fin reaches beyond beginning of dorsal fin base. Large scales (about 28-30 along midline). Adult males have a dark band on edge of tail fin, and adult females have a dark spot toward the rear of the dorsal fin. Typically brown, gray or olive on back fading to white on belly with faint to prominent dark, irregular bars and blotches on sides. Pectoral and pelvic fins often reddish in adults. Spawning males develop an iridescent blue color on their backs. 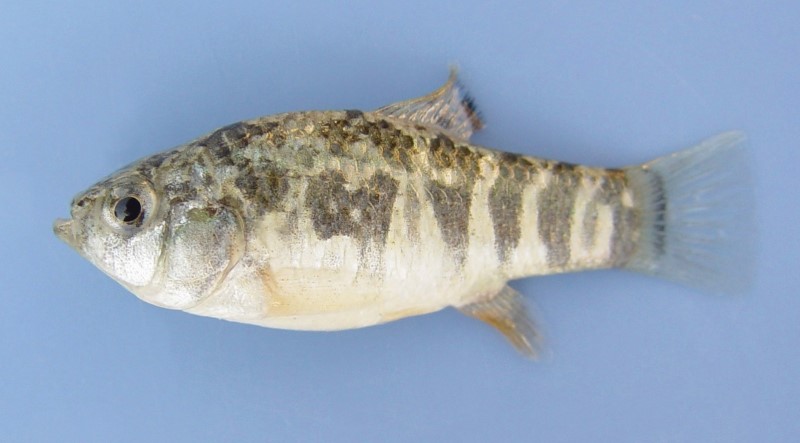 A younger 1.3-inch sheepshead minnow is not as thick-bodied and has more prominent barring/blotches on its sides.

Distribution. Atlantic Coast and Gulf of Mexico from southern Massachusetts to Texas. In Connecticut, they are found along the entire coastline, where they are typically uncommon to common in abundance.

Habits. Prefer shallow waters of salt marshes and bays, typically over mud bottoms. Although there are freshwater populations in other areas of their range, they only occasionally enter fresh water in Connecticut. Can be captured with a small-mesh dip net or seine. Sheepshead minnows are easily kept in salt/brackish water aquariums. They require live, freeze-dried or frozen food. They tend to stay toward the bottom of the tank and are aggressive. They will nip and eat the fins of any fish that is not much larger than themselves.

Comments. The sheepshead minnow is a standard for use in many laboratory toxicity and genetics studies.