Identification. Adults - Much larger than brook lamprey. Mouth with many large, pointed teeth in circular patterns. Generally, brownish-tan with mottled dark markings, but may also have greenish hues. Transformants (migratory juveniles) - Dark gray on back to silvery on sides.
Ammocoetes (larvae) - No eyes. Non-pigmented area behind the nostril smaller than the nostril area itself. Melanophores (pigment) on upper lip developed throughout. Melanophores on caudal peduncle well developed throughout the region. Typically more olive in color than brook lamprey. 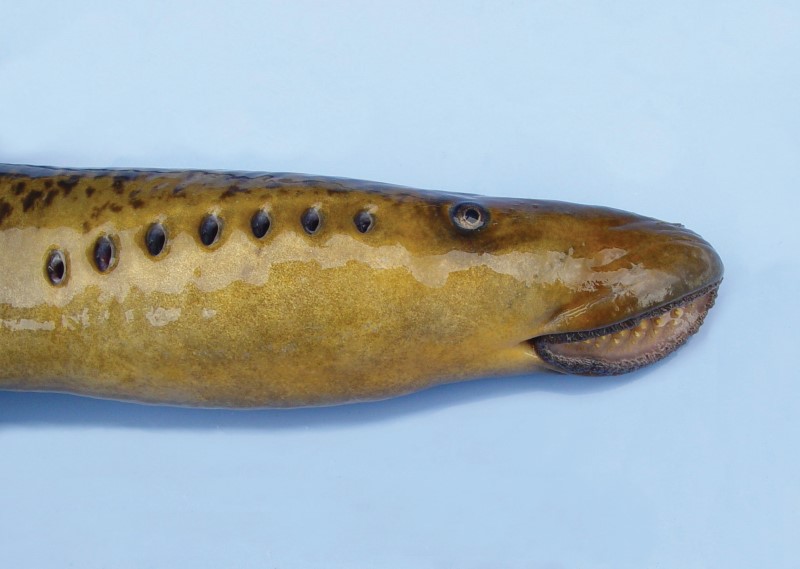 Distribution. Enters rivers to spawn along the entire Atlantic Coast. The Connecticut River hosts one of the largest runs on the East Coast, and most tributaries support runs. Runs in most Connecticut streams were lost due to dam building and pollution, but remnant runs persist in the Noroton, Mill (Fairfield), Housatonic, Quinnipiac, Branford, East, and Hammonasset rivers. Runs have been extended in several rivers (red lines on map) due to the building of fishways. The species began recolonizing the Shetucket River (using the recently built Greenville Fishlift) in 2003. 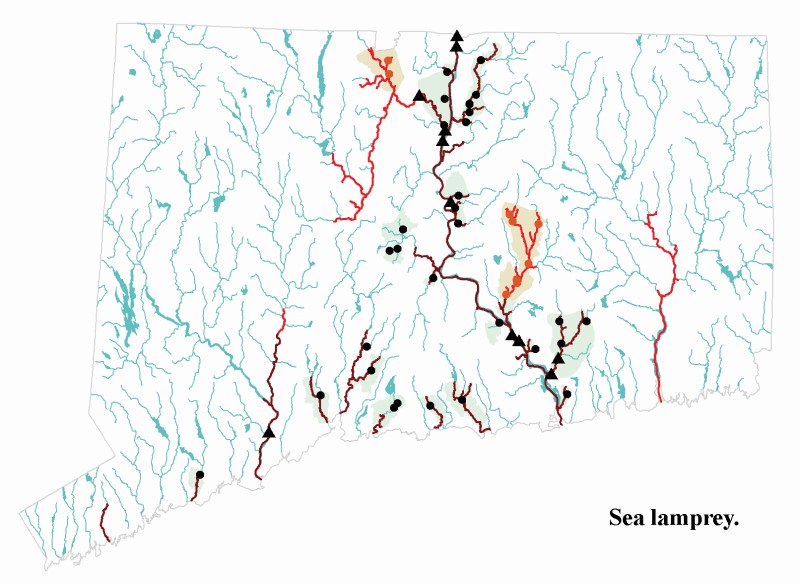 Habits. Sea lamprey begin life as larvae (ammocoetes) that live in burrows in streambed sand or mud. After about five years, they transform during July to November into miniature adults (transformants) and head to sea. Adult sea lamprey live for two years at sea, where they feed on the body fluids of fishes by attaching themselves with their oral disks. Each spring, mature adults return to Connecticut coastal streams to spawn. They congregate in estuaries as early as January and enter spawning habitat in May and June. Sea lamprey make distinctive nests in gravel riffles that consist of a depression accompanied by a downstream pile of rocks. All lamprey die after spawning. Juvenile lamprey might be captured by kick netting with a small mesh dip net or seine, but most are probably burrowed too deeply to be dislodged. Spawning sea lamprey are easily observed from shore, and dead or dying adults are a common sight during June. 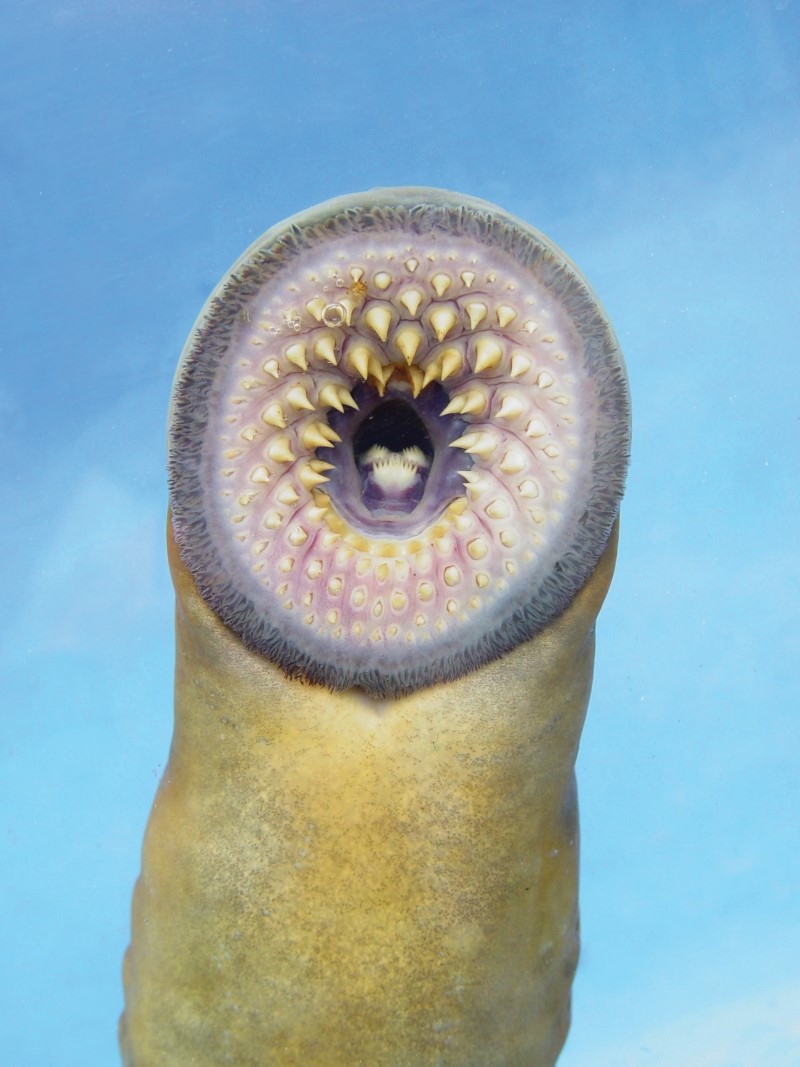 Close-up of a sea lamprey mouth showing its many sharp teeth.

Comments. The state’s only parasitic fish that enters fresh water. They have a bad reputation because of their role in the decimation of fish populations in the Great Lakes. However, sea lamprey in Connecticut do not feed on fish while in fresh water and pose no risk to our fish populations. In fact, they make valuable contributions to river ecosystems by providing important forage for animals, ranging from coyotes to caddisfly larvae, that scavenge the carcasses. The nesting activities of sea lamprey aid other species by clearing silt from gravel beds used by spawning trout and minnows. Sea lamprey were used as food by Native Americans and later by some immigrants, particularly those from Eastern Europe. Apparently, few people in Connecticut eat lamprey now.

Larval sea lamprey (ammocoetes) lack the eyes and teeth of the adults.

Transformant sea lamprey look like miniature adults, but are more silvery in color.