Identification. Dark vertical barring on sides, no chain-like markings. Opercle and cheek completely scaled. Snout shorter than chain pickerel or pike (distance from tip of snout to beginning of eye less than distance from back of eye to back edge of opercle). Dark bar extends downward and slightly backward from eye. Dorsal and tail fins without dark markings. Back and vertical barring typically brown to olive; lighter areas on sides brown to cream-colored; belly cream-colored. Lower fins usually reddish. Vertical barring well-developed in juveniles over 2 inches.

The vertical barring is already evident in this 3-inch juvenile redfin pickerel.

Distribution. Atlantic coastal states from New Hampshire to Florida. A very similar subspecies, the grass pickerel (E. americanus vermiculatus), is distributed west of the Appalachians from western New York State to eastern Texas. Redfin pickerel have a spotty distribution in Connecticut. Although found in all major drainages, they are most common in the coastal and Connecticut River drainages and are absent from most of the Housatonic, Thames and many of the western coastal watersheds. They are typically uncommon to common where found. 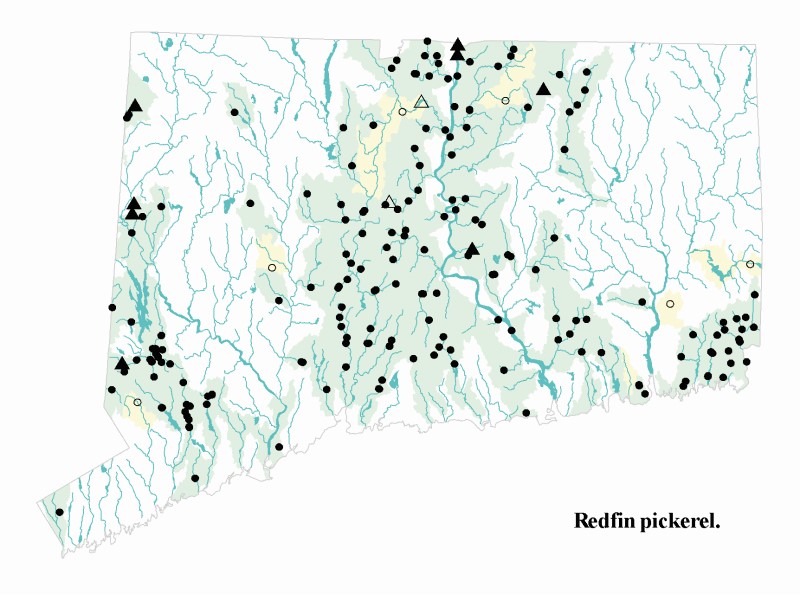 Habits. Prefer quiet vegetated backwaters of streams and small ponds. They are rare in the main bodies of larger lakes and rivers. Can be taken on a variety of small lures and baits, but anglers do not often fish in their shallow-water habitat.

Comments. Connecticut’s smallest pike species. They are typically mistaken for small chain pickerel by anglers. They may compete with or have different habitat preferences than chain pickerel because they tend to be most common where chain pickerel are rare. Redfin pickerel occasionally hybridize in nature with chain pickerel. Characteristics of hybrids are intermediate between the two parent species.

A hybrid cross between a redfin pickerel and a chain pickerel displays characteristics intermediate between the two parent species.