Mummichogs, such as this 3-inch male, are often the most abundant fish species in inshore tidal areas of Connecticut

Identification. Similar to banded killifish, but more stout-bodied, with the dorsal fin set farther back (distance from first dorsal ray to beginning of tail fin less than distance of first dorsal ray to middle of eye). Lateral line scales fewer than 36. Short, blunt snout (eye length about equal to snout length). Smaller head than striped killifish (head about 1/4 length of body not including tail fin). Dorsal rays 11-12. Base of first dorsal ray directly over or slightly ahead of first anal ray. Thicker caudal peduncle than striped or banded killifish. Snout level with or slightly above horizontal plane of middle of eye. Adult males have a dark spot on back edge of dorsal fin. Typically dark gray on back fading to lighter gray on sides and whitish on belly. Spawning males typically with light blue spots and dark vertical bands (thicker and fewer than on the banded killifish). 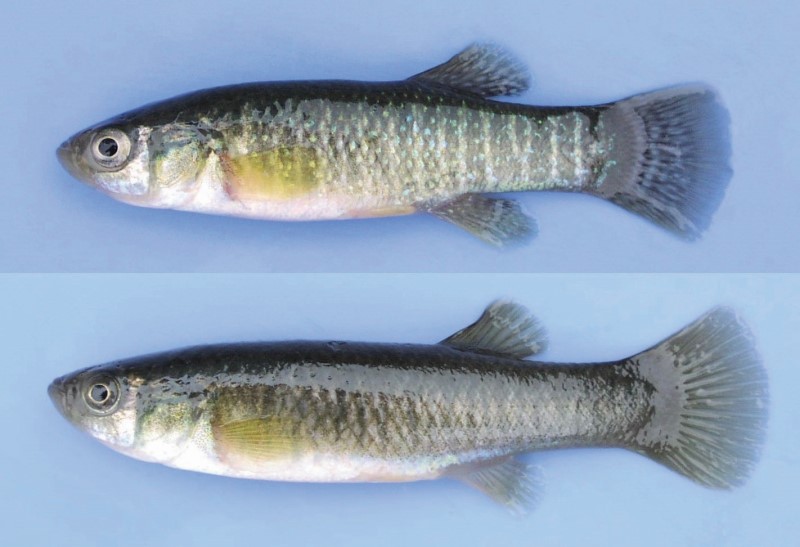 Distribution. Atlantic Coast from Maine to Georgia. Found along the entire coastline in Connecticut, where they are typically very abundant. 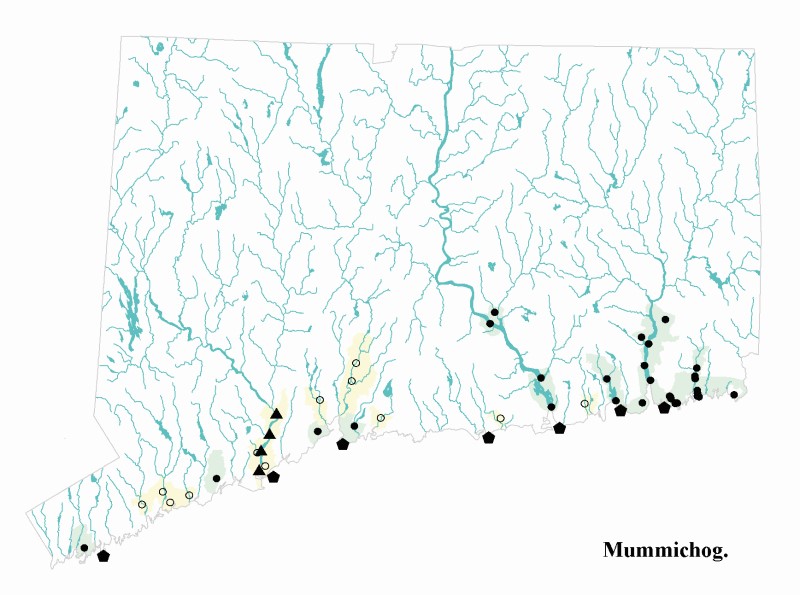 Habits. Prefer saltwater marshes and tidal creeks, but will occasionally enter freshwater streams. Very hardy. Tolerant of high temperature and low oxygen levels. If kept moist, they can breathe air when taken out of water. Can be captured with a small-mesh dip net or seine.

This 2-inch subadult mummichog is more slender than a typical adult.

Comments. Along with striped killifish, mummichogs are the most abundant bait/prey fish in inshore tidal areas. They are sold as bait at coastal bait shops (where they are often called “killies” or “mummies”) and are popular due to their toughness and ability to survive in fresh water. Occasional fish show up in inland waters due to bait bucket releases.