Identification. Streamlined shape. Forked tail rounded at lobes. Barbel at corner of mouth. Snout projecting well beyond a ventral mouth. There is no groove between the upper lip and the snout. Top edge of mouth lower than bottom edge of eye. Lateral band absent or indistinct. Olive to brown on back fading to lighter brown on sides and white on belly. Sides typically mottled or blotchy. Fins may have reddish edges. The upper lip and edges of pectoral and pelvic fins turn reddish-orange in spawning males.

This longnose dace has a different color pattern.

Distribution. Widely distributed throughout northern North America. Most common in the Northern United States. They are typically found below the natural fall line of most Connecticut streams (although they are absent in many coastal streams) where they are usually common to abundant. Longnose dace are oddly absent from the Yantic River drainage and the upper Shetucket River drainage above Willimantic. 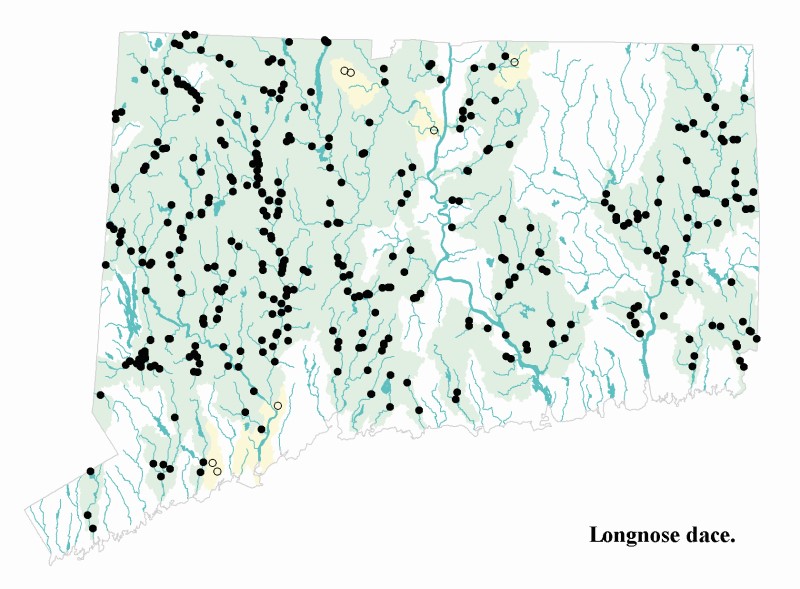 Habits. Prefer gravelly riffle areas of medium to large streams. Often found in the same streams as blacknose dace, but typically in areas of faster current. Can be caught with small-mesh dip net or seine. Easy to keep in home aquariums, but need cooler water (below 65º F) and won’t thrive in the presence of larger fish.

Comments. Its hydrodynamic body is similar to that of the Atlantic salmon or sturgeon, with large pectoral fins and a head shape that improves its ability to hold near the bottom in fast water with little effort.