Markings tend to be more bold on younger largemouth bass, such as on this 7-inch sub-adult.

Distribution. Native to the eastern half of the United States excluding most of the Eastern Seaboard states. Successfully introduced throughout the United States, Mexico, extreme southern Canada and many other parts of the world. Largemouth bass may be the most widely distributed fish species in Connecticut and are present in almost all water bodies, where they are typically common to abundant. 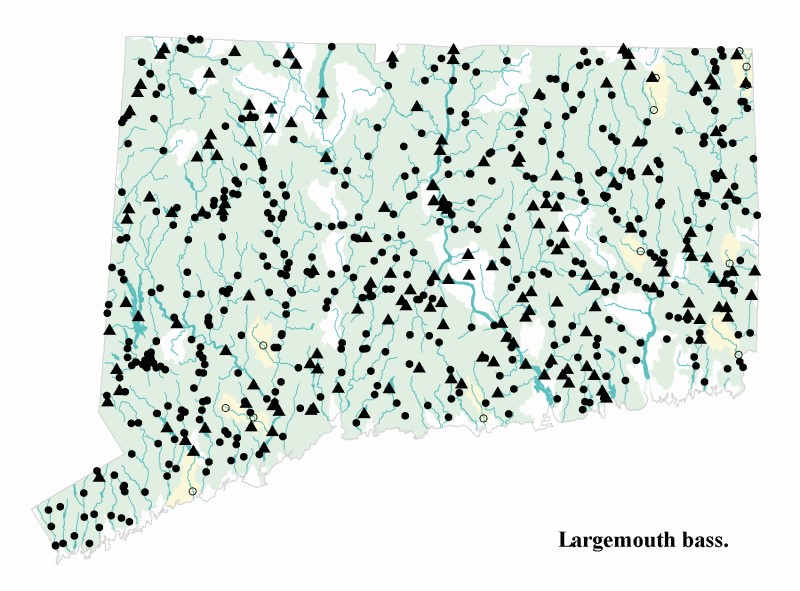 Habits. Can thrive in a variety of habitats, but prefer lakes and ponds or backwaters of streams and rivers with at least moderate amounts of vegetation. Males can readily be observed guarding their nests (which appear on the bottom as circular light-colored areas about 18 inches in diameter) during May and June in shallow shoal areas. Largemouth bass can be caught by angling with a variety of baits and lures. They are easy to keep in home aquariums, but grow large and are aggressive. They will eat dry pellets, but need at least some live or fresh food to thrive. Largemouth bass typically stay in the center of the water column and will chase (or eat) smaller fishes.

An aquarium shot of a 2.7-inch juvenile largemouth bass.

Comments. The most popular gamefish in the country, the largemouth bass is also the principal predator in most of our state’s lakes and ponds and thus plays a key role in the health of aquatic ecosystems. The Massachusetts State Record (15.5 pounds) is the largest northern strain largemouth bass on record. Florida strain largemouths can exceed 20 pounds.