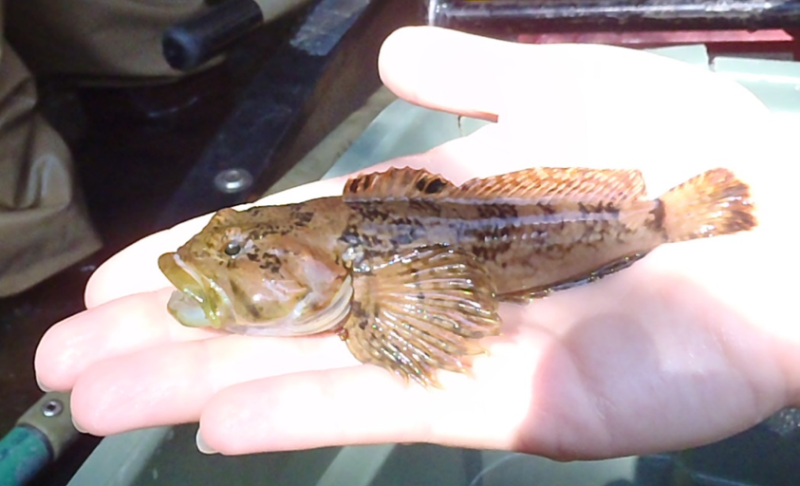 A 5-inch adult knobfin sculpin - the largest specimen collected in Connecticut to date.

The slimy sculpin (left) has a relatively narrower head and smaller mouth than the knobfin sculpin (right), which often has blue-green pigment on the lips and throat.

Distribution. Knobfin sculpins are native to the White River drainage in the southern Ozark Region of southern Missouri and northern Arkansas. The first specimen from Connecticut was collected from the lower Weekeepeemee River in 2002. Knobfin sculpins have since colonized the entire lower Pomperaug River drainage, where they have become super abundant in the entire Pomperaug River main stem, and in the lower reaches of Sprain Brook, Weekeepeemee River, and Nonewaug River. The upstream spread of this species has been limited by natural bedrock barriers on Sprain Brook and Weekeepeemee River, and by an old mill dam on Nonewaug River. 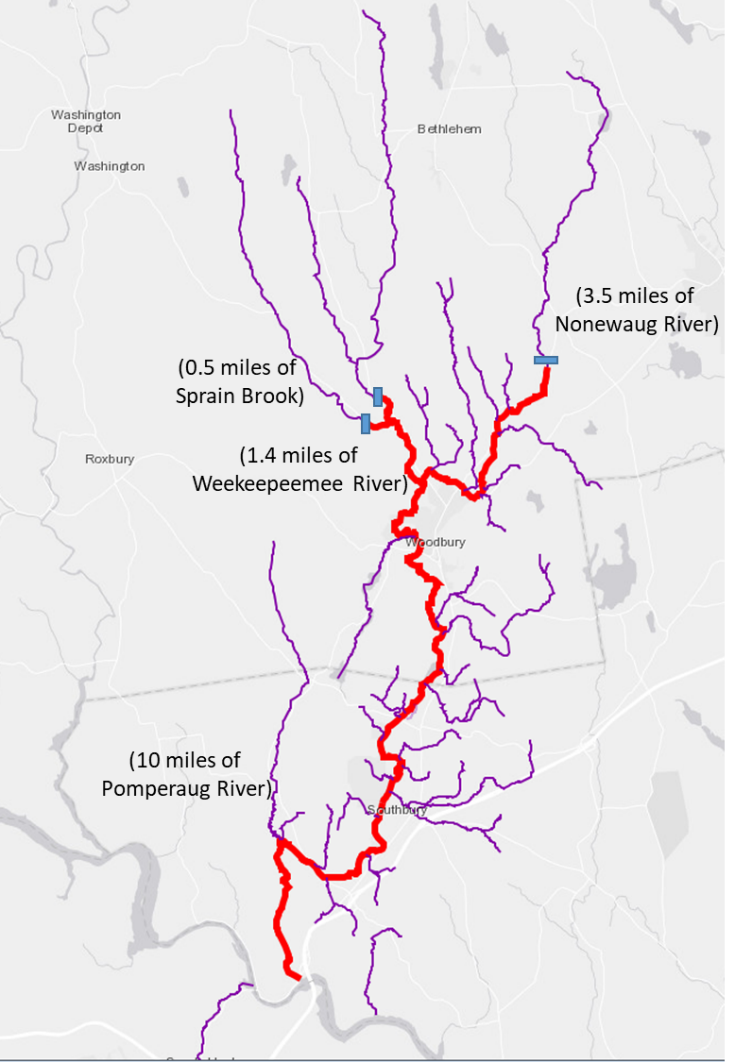 The range of the knobfin sculpin in Connecticut is restricted to the Pomperaug River Drainage Basin in Woodbury and Southbury. The Pomperaug is a tributary to the Housatonic River. Red highlights indicate the current range within the drainage. Purple indicates areas where no sculpins were collected. Blue bars represent barriers to upstream spread. Miles of river infested with this species are indicated in parentheses.

Habits. Interestingly, knobfins were not found in the smaller Pomperaug tributary brooks, seeming to prefer the habitat in the small main stem rivers. Habitat in these small rivers consists of clear, moderately cool water with gravel and cobble substrate and moderate to fast flows. They stay on the bottom, and can be found holding positions in a range of flows, from swift riffles to shallow pools. In prime habitat, they can reach high densities approaching one per square foot.

Comments. Knobfin sculpins likely arrived accidentally in Connecticut in the early 2000s with a commercial shipment of live fish from the Ozark Region. They remained present at low levels for over 10 years, then rapidly proliferated and spread into all available main stem habitat. Historical fish sampling data show that impacts to other resident fish species, including young trout, have been devastating, and impacts to aquatic invertebrate species, such as crayfish and aquatic insects, are probably significant as well. Future efforts to contain the spread of this species will focus on outreach and education to deter private transfer to other streams. 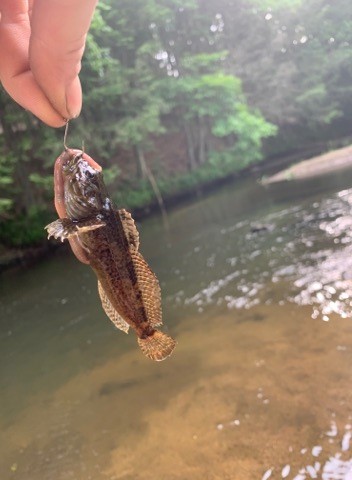 Anglers on the Pomperaug River have recently reported catching these small but voracious predators on hook and line, such as this photo sent into the Connecticut Fish and Wildlife Facebook page.