A lower jaw that juts out strongly distinguishes this 17-inch hickory shad from other Connecticut herrings.

Identification. Similar to American shad and other herrings, but with a strongly projecting lower jaw that does not rise steeply within the mouth. Cheek patch deeper than wide. Single dark spot on the shoulder usually followed by several faint spots. Typically dark greenish to gray on back, silvery on sides, and white on belly.

Distribution. Atlantic Coast from Maine to northern Florida. In Connecticut, they are commonly found in the bays and mouths of most larger rivers during the summer and fall. Commonly found as far up the Connecticut River as East Haddam, but reported up to Wethersfield and Hartford. 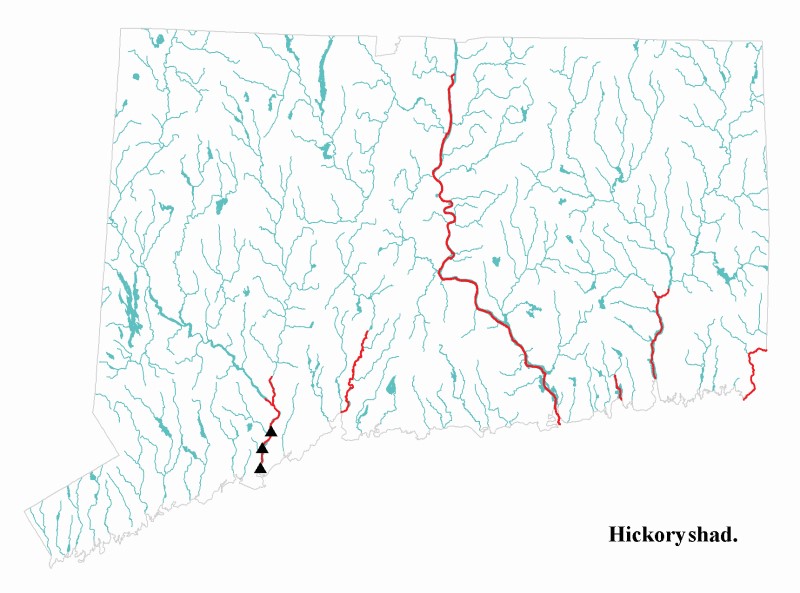 Habits. Unlike other shads and river herring, this herring rarely ventures far upstream of salt water. It is anadromous and is known to spawn in freshwater rivers in the Chesapeake region and south, but spawning has not been documented in Connecticut. The fish also differs from other Connecticut herring, which feed primarily on zooplankton, in that it preys on small fishes. Schools congregate in the mouths of rivers in the fall and prey on schools of juvenile shad, menhaden and other species. Hickory shad can be locally common to abundant. Can be caught by angling with small spinners, spoons and jigs as well as an assortment of natural baits.

Comments. Prior to the 1990s, hickory shad visited Connecticut only in low numbers during the fall. Since then, the species has become an annual visitor to our estuaries and more are being reported in rivers during the spring, where it’s possible they’ve begun spawning. It appears that the trend of increasing abundance is part of a natural range expansion into Southern New England. The summer/fall recreational fishery for hickory shad is gaining in popularity.