As with many things, getting good at identifying fish takes practice. Some species are very difficult to tell apart, and many individuals of the same species vary in coloration and body shape. Complicating things further, juveniles usually look different than adults, and many species change color during the spawning season. So to be more certain of any fish’s identity, it is best not to focus on only one or two characteristics, but to instead keep in mind a suite of possibilities.

For the academically minded, a technical taxonomic key to Connecticut fishes can be consulted. However, in most cases you should simply be able to browse through the photos until you have found a fish that most looks like yours. Fish families and species are not in any specific taxonomic order in this website, but are loosely arranged according to how similar they look. The primitive, snakelike fish families are first (for example, lampreys), followed by cylindrically-shaped fishes with no spines (like trout and minnows), then by the typical spiny fishes (like sunfish and perches), and finally by the remaining miscellaneous oddballs. If you are not already familiar with the various fish families, it is probably best to start with the section called “Guide to Families of Connecticut Freshwater Fishes.” Once you have identified the proper family, go to that section of the book. Then, narrowing your fish down to species is much easier.

To make using this website a little less daunting, we have attempted to keep the technical jargon to a minimum. We have used common names for fish body parts wherever possible (such as “tail fin” instead of “caudal fin”). However, fish have many unique features, so learning some technical terms is necessary to describe them. See “Parts of a Fish” below for the terms most commonly used in this book. See the glossary for any other term that is unfamiliar to you. 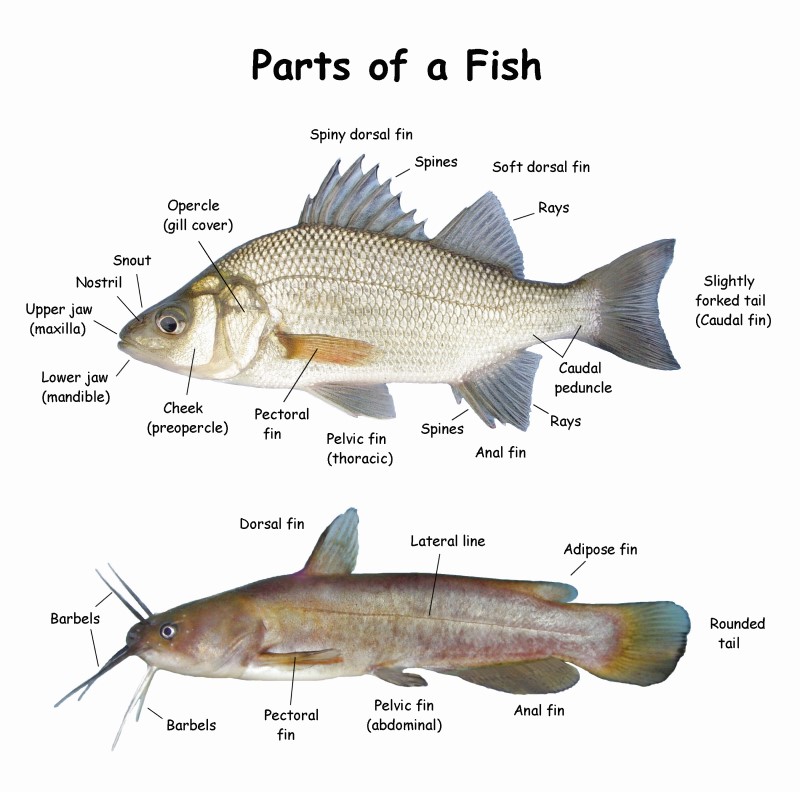 Habits. Describes what kind of waters, habitats, structure the species typically inhabits and how/where/when it lives there. Next is described where/how (or if) people can best observe the species or signs of it (e.g., nests) and how it can most easily be captured. Lastly, any specifics on raising the species in a home aquarium are described.

Comments. Contains what else is interesting, noteworthy or “cool” about the species.

Fish distribution maps in this website were created by collating a number of recent and historical fisheries surveys from as early as the 1930s until the present. Data were stored and maps were produced using Geographic Information System (GIS) computer software.

Lake, Pond and Large River Surveys. The main source of lake data used in the distribution maps is from the Statewide Lake and Pond Survey, which collected fish data from 161 lakes, ponds and some major river stretches by nighttime boat electrofishing (Jacobs and O’Donnell 1996, 2005). This survey began in 1987 and is ongoing as part of the Inland Fisheries Division’s standard lake and pond monitoring program. Supplementing this statewide survey is a fishery survey of the Lower Housatonic River (1991-94), which used a variety of gear, including gill nets, hoop nets, seines and trawls to sample fishes in this river below the Derby Dam (Aarrestad and Jacobson 1995). Data from two older Connecticut lake and pond surveys (Thorpe 1942, Wilde 1959) were compared with those of the more recent surveys to infer changes in fish distribution among lakes. These historical surveys incorporated gill and seine nets to sample fishes in 47 lakes (1937-39) and 154 lakes (1953-56), respectively.

Stream Surveys. Recent stream fisheries data comes from a seven-year Statewide Stream Survey (Hagstrom et al. 1996), which used electrofishing to sample over 1,000 Connecticut stream stretches. As with the lake monitoring, the Inland Fisheries Division continues this work as an ongoing program, annually sampling as many streams as resources permit. Added to this body of work are three surveys conducted by University of Connecticut master’s degree candidates. One survey used seining to sample 120 southeastern Connecticut pond and swamp sites to better define the range of the banded sunfish (Jann 2001). Another incorporated backpack electrofishing gear to search for burbot in a number of northwestern Connecticut streams (Dixon and Vokoun 2006). Finally, a survey using fyke, seine and gill nets to sample shoreline streams and estuaries of eastern Connecticut (Fried 2006) was used to supplement the distributions of marine and estuarine fishes. Historical data from one statewide stream fisheries survey (Whitworth et al. 1988) was used to compare against the more recent fish distribution data. This survey used beach and kick seining to sample 920 stream sites during 1965-66. 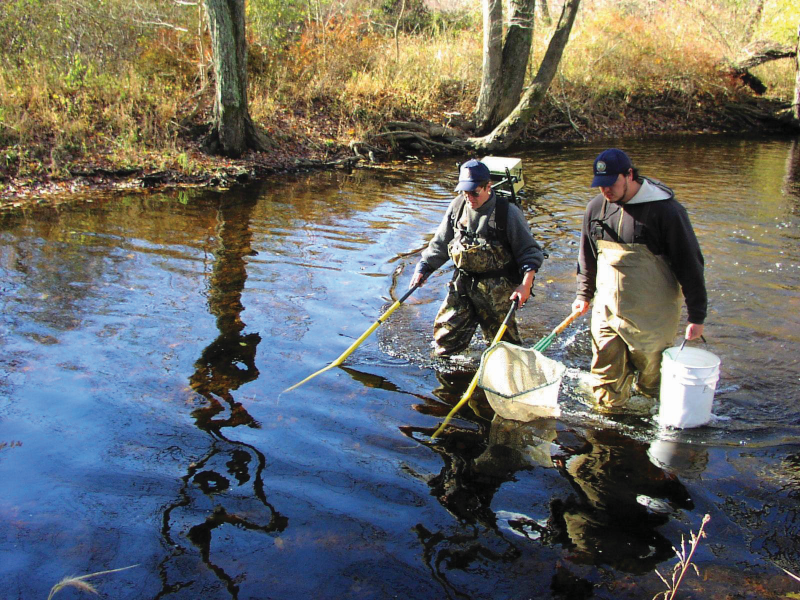 Marine Shoreline Seine Survey. Data from a beach seine survey conducted during 1988-2003 by the Fisheries Division was incorporated to better define the distribution of estuarine fish species (Molnar 2004). This survey is an ongoing monitoring project, which annually samples eight standard sites along the Connecticut shoreline of Long Island Sound.

How to Interpret the Maps

The fish distribution maps use a series of symbols and shaded watershed areas to indicate where each species was sampled and whether each has always been there, is relatively new to the area, or was historically present but has not been found recently. Regardless of color, if there is a symbol or shaded area on the map, the species was caught there at some point in time. Blank areas indicate that the species has never been caught in that region. See an example fish distribution map for the bridle shiner below. 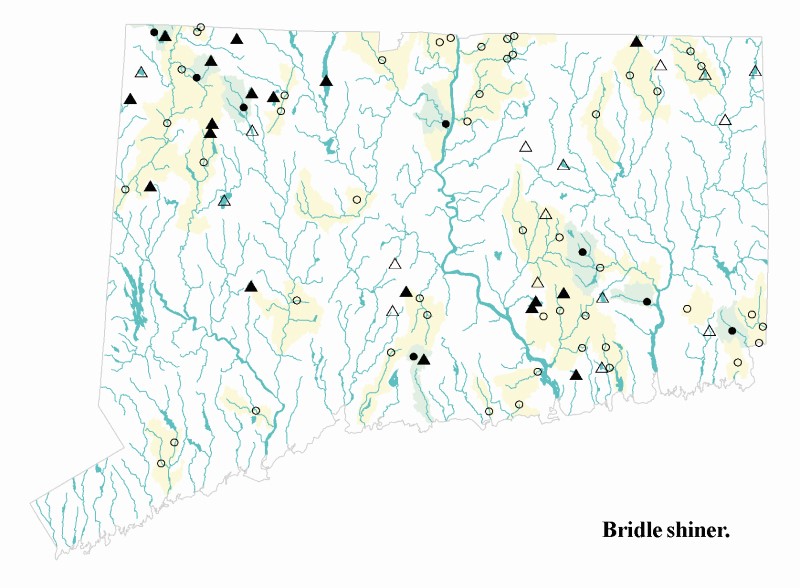 Stream sites where fish were caught are indicated by dots, whereas lake and major river captures are represented by triangles (see Legend for Fish Distribution Maps on next page). Wherever a species was caught in a stream (dots or open circles), the corresponding local drainage area is also shaded. This shading was done to indicate that although the fish species was caught in a particular spot, it is also likely to be in other areas of the drainage because stream fish are generally free to move up or down stream. For lake, pond or major river samples, drainage areas are not shaded because lake fish populations tend to be more discrete and isolated, i.e. it is more difficult to get in or out of most lakes. In the case of major rivers, it can be assumed that any species might be found some distance up or down stream from where it was sampled, but not all river species commonly move into smaller tributary streams. Any river species that does move up into tributary streams would probably have been detected during stream sampling, thus causing the local drainage area to become shaded.

Circles (stream samples), triangles (lake and major river samples) and shaded drainage areas were also color-coded to indicate whether a fish species’ distribution has changed over time. Black circles and triangles accompanied by light-green-shaded drainage areas indicate that the species was found during both recent (post 1980) and earlier (before 1970) surveys. A preponderance of this combination indicates that the species’ range has been relatively stable over time. Open circles or triangles and yellow-shaded drainage areas indicate that a species was caught during an older survey (1960s or earlier), but has not been detected by any recent survey. A distribution map with large areas of this combination indicates that the species’ range may be contracting (i.e., the fish is becoming less common). Red circles and triangles and light brown drainage areas indicate that a species is experiencing a range expansion. In this case, the species was caught recently, but was not present during older surveys. 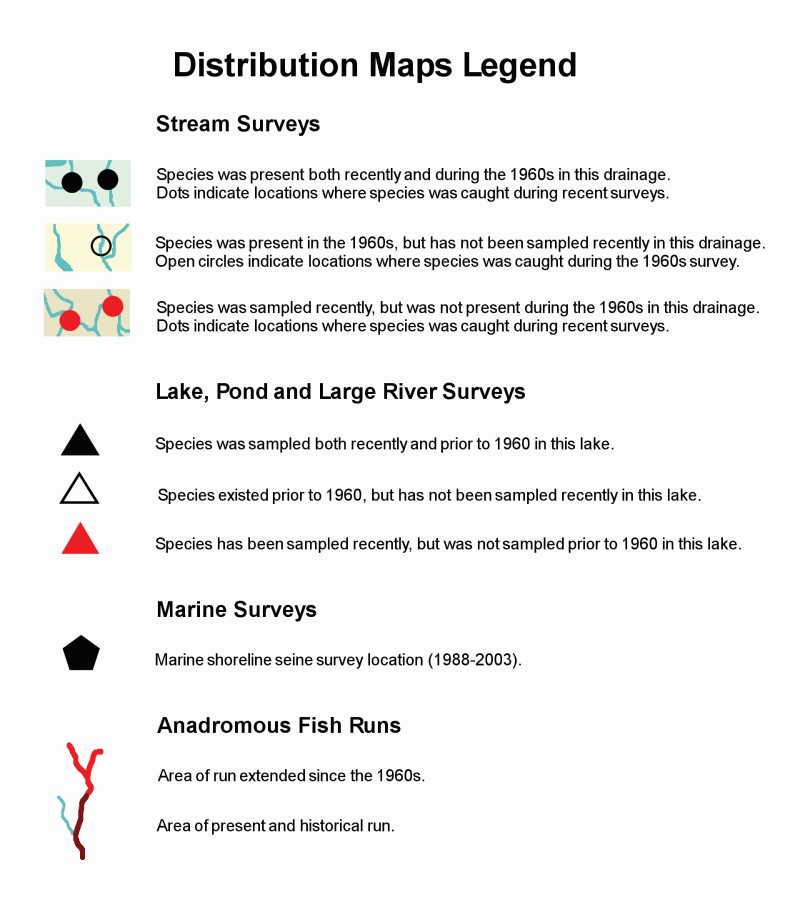