Identification. Similar to fallfish, except with smaller scales (more than 50 in lateral line) and adults usually have a black spot at front of the base of the dorsal fin. Streamlined shape. Forked tail. A small barbel in the groove above and a little in front of end of jaw. Base of first dorsal fin ray just posterior to pelvic fin base. Scales along side in front of the dorsal fin and above the lateral line are smaller than those behind the dorsal fin. Mouth large, end of jaw reaching at least to front edge of eye. Juveniles and usually adults have a dusky lateral band. Typically gray to brown on back fading on sides to white on the belly. Adults are less stouter-bodied and silvery than fallfish.

The creek chub may not have a dark lateral band, but there is usually a black spot on the dorsal fin (6-inch adult pictured).

Distribution. Widely distributed and common over much of the United States and Canada east of the Rockies. In Connecticut, creek chubs are found in most streams west of the Connecticut River drainage, where they are usually uncommon to common in abundance. Scattered populations also exist in the Connecticut and Thames River drainages. A similar westerly distribution is reported in Massachusetts. Creek chub may be slowly expanding their range into eastern Connecticut. 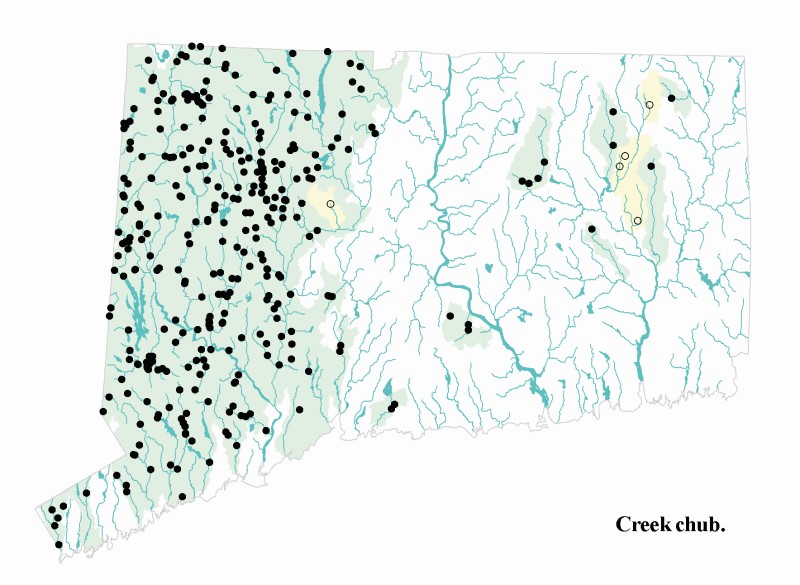 Habits. Prefer pools of smaller streams with sand or gravel bottoms. Can be easily taken by angling with bait and small lures. One of the hardier and easier minnows to keep in home aquariums.

Creek chubs may be slowly expanding their range from west to east in Connecticut.