Identification. Similar to goldfish. Large, heavy-bodied fish. Forked tail. Large scales (“mirror carp” have scattered scales and “leather carp” have few or no scales). Long dorsal fin with 17-23 soft rays. At least one thick barbed spine at the front of dorsal and anal fins. Two pairs of barbels on upper jaw. Adult wild carp are typically brown to olive on the back fading to brassy or gold on the sides with no conspicuous spots or markings. Domestic pet stock carp (koi) may be very heavy-bodied with a variety of bright colors, including black, white, red, pink, orange, yellow or some combination of these.

The mirror carp is a variety of the common carp that has only a few scattered scales.

Distribution. Native to Europe and Asia and widely introduced throughout North America. In Connecticut, common carp are present within all major drainages in most large rivers and in some lakes, where they range from uncommon to common in abundance. 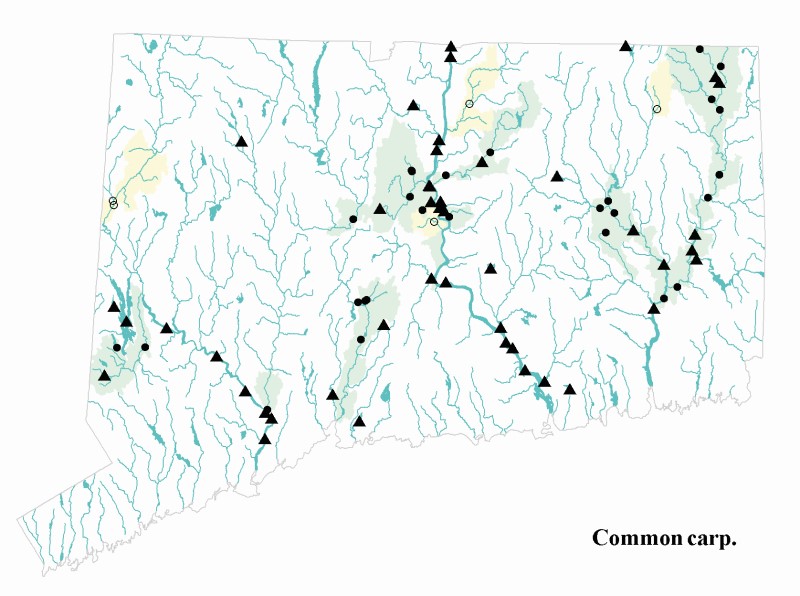 Habits. Can be found in a variety of habitats, but are generally found over soft sediment in larger, slow-moving water bodies. They are bottom feeders that are tolerant of poor water conditions. Can be caught by angling on the bottom with vegetable-based bait (for example, corn). Carp can be kept in home aquariums. They are tolerant of poor water quality and not picky eaters, but it is difficult to find a small one, and they quickly outgrow smaller tanks. 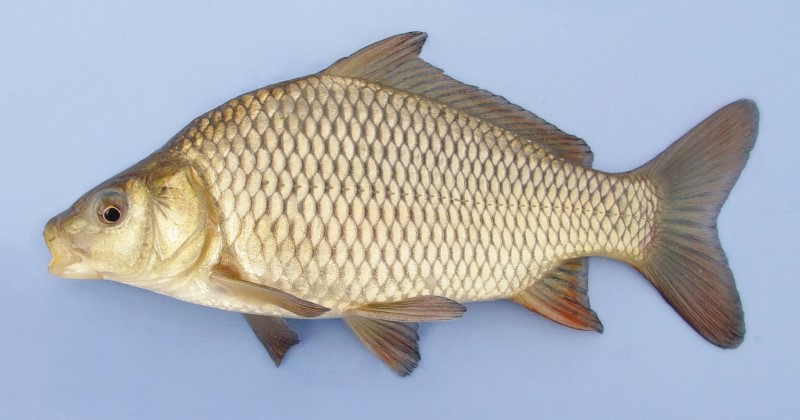 This 6-inch juvenile common carp looks much like the adult.

Comments. The common carp is the state’s largest strictly freshwater fish. Carp often jump clear of the water during the still hours of the evening, inciting anglers into believing they just saw the world’s largest bass or trout. During feeding, adult carp uproot vegetation and can locally increase turbidity. Despite this, their impacts on most larger aquatic environments are probably slight. Coveted as a game and food fish in other parts of the world, carp are underappreciated and underused in this country. Domestic koi are typically kept in ornamental and private ponds, but sometimes escape to public waters.

Koi are a domestic variety of common carp that have been bred for centuries to sport a variety of color patterns.