This 9-inch subadult chain pickerel is just beginning to develop the chain-like markings of the adult.

Distribution. Eastern coastal United States from Maine to Florida and west to Missouri and Louisiana. Found in almost all lakes and ponds and in most medium to large streams in Connecticut, where they range from rare to common in abundance. For unclear reasons, chain pickerel are less common in streams west of the Connecticut River. A similar east/west pattern is present in Massachusetts. 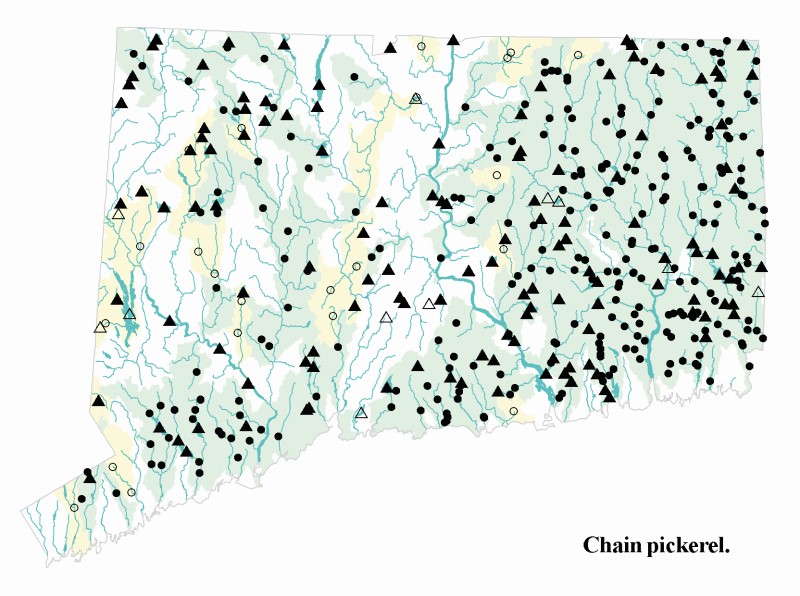 Habits. Prefer quiet, vegetated areas of small shallow ponds to large lakes, and in all but the smallest of streams. Similar to northern pike, they most often feed by ambushing fish, but may also forage for invertebrates, such as crayfish. Pickerel can readily be caught on a variety of lures and baits.

Comments. The chain pickerel is Connecticut’s largest native freshwater predatory fish. Before the introduction of bass, it was the top predator in the state’s lakes and ponds. Similar to pike, they feed actively throughout the winter and are popular with ice anglers. Large pickerel are most common in lightly-fished waters. Pickerel populations have decreased in lakes where inshore vegetation that is required for spawning and rearing of young has been reduced by practices such as winter drawdown.