The burbot is the only member of the cod family that lives entirely in freshwater.

Distribution. Burbot have a circumpolar distribution. In North America, they are distributed throughout Alaska and Canada south into the Northern United States. Connecticut is the southern extreme of the burbot’s range in Eastern North America. They have been found in only a few locations in the state, two tributaries of the northern Housatonic drainage and, more rarely, in the mainstem and one tributary of the Connecticut River. They are typically uncommon to rare where found. 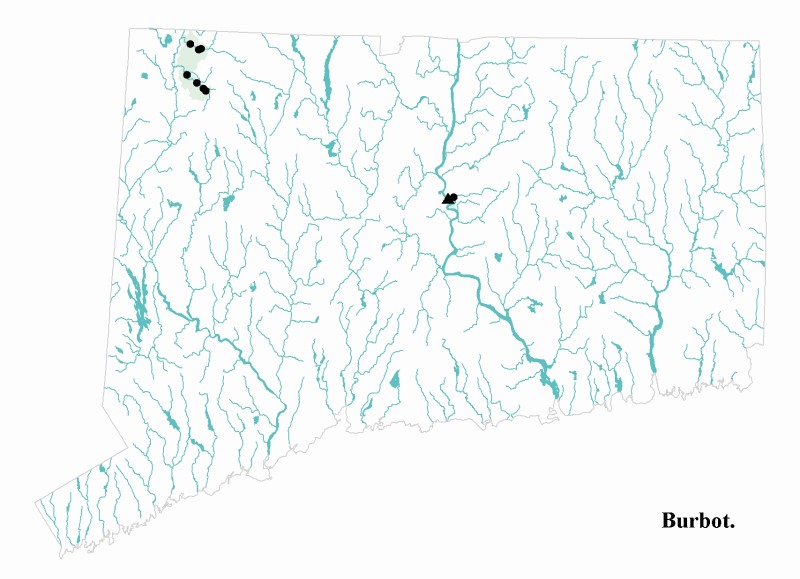 Habits. A nocturnal fish that mostly inhabits deep coldwater lakes and large rivers. Stream populations spend the day in deep holes or under rocks, ledges or tree roots. They typically breed in aggregate, forming a large, writhing ball of spawning fish. Can be caught by angling with bait on the bottom. Burbot are not easy to keep in home aquariums because they require cold, good-quality water, low-light conditions and live or fresh food.

Comments. The burbot is the only completely freshwater member of the cod family. Little is known of its life history in Connecticut. The Housatonic drainage population appears to be locally restricted and small. The only thing known of the Connecticut River population is that a few have been taken by electrofishing and that anglers occasionally catch them, especially around Hartford. They may spawn somewhere north in the river and occasionally drift down into Connecticut. It is uncertain whether burbot are native to the state. They may represent a remnant population or they may have been introduced. The burbot is listed as a Connecticut State Endangered Species.