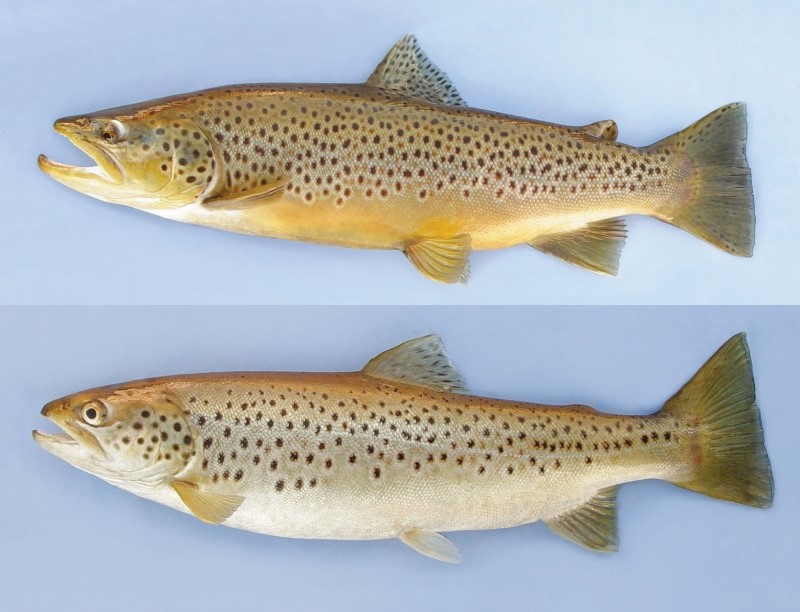 Identification. Anal rays 9-13. Adults - Similar to Atlantic salmon. Dark spots on a light background. Some spots may very rarely be X-shaped, but otherwise tend to be more regularly shaped than those of Atlantic salmon. Most brown trout have a number of red spots on their sides, some of which may be surrounded by blue or light halos. Mouth large; jaw extends well beyond posterior margin of eye. Few or no spots on tail fin. Teeth on center roof of mouth sharp, well developed in a zigzag pattern. Pelvic and anal fins (especially of wild fish) may have a white stripe followed by a black stripe on their leading edge, but are not orange or red. Dorsal fin on wild fish may have a white tip. Caudal peduncle thick (cannot be “tailed” like a salmon). Tail fin nearly square or only slightly concave. Color variable, usually brownish on back fading to reddish-brown, tan or silver on sides. Parr - Adipose fin without dark border. Tail fin concave or only slightly forked. Edge of adipose fin reddish to orange, many small dark spots below lateral line, usually 10 to 11 parr marks. Red or yellow spots generally present on sides. Spaces between parr marks usually less than width of parr marks. Pectoral fin shorter than total length of depressed dorsal fin. Jaw extends at least to rear edge of eye. 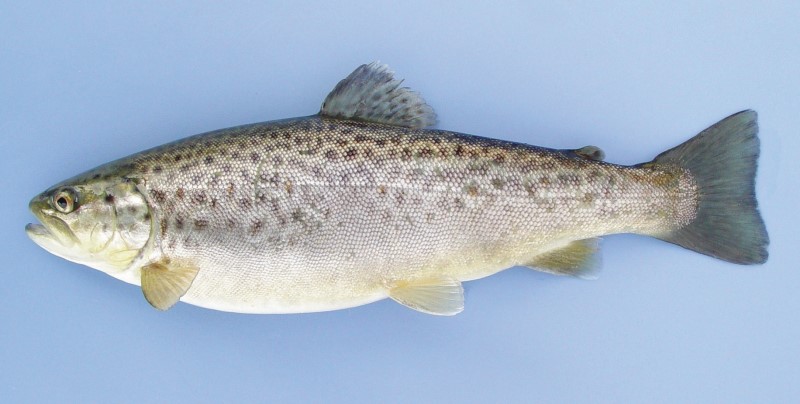 This 10-inch hatchery-raised brown trout is much less colorful than a wild fish. 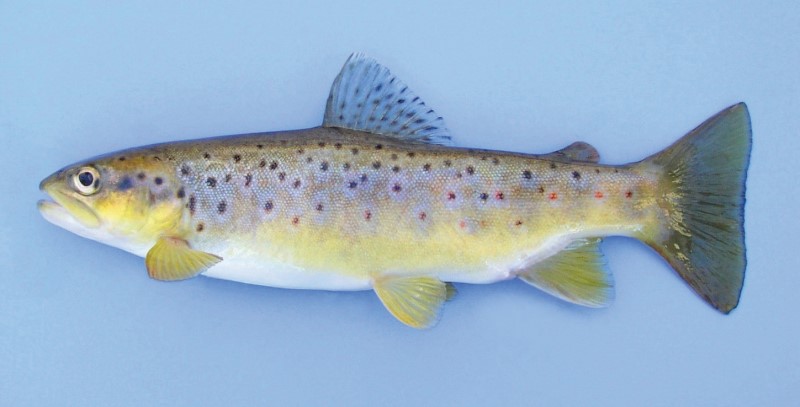 Color and perfect condition of fins indicate that this 9-inch brown trout is probably a wild fish.

Distribution. Native to Europe and Asia. Widely introduced throughout North America. In Connecticut, brown trout are stocked as adults in many lakes and most fishable streams. Naturally reproduced wild brown trout are present in many Connecticut streams and are common in some. Some brown trout will descend into saltwater estuaries where they grow quickly, and upon returning to fresh water, are called “sea-run” trout. 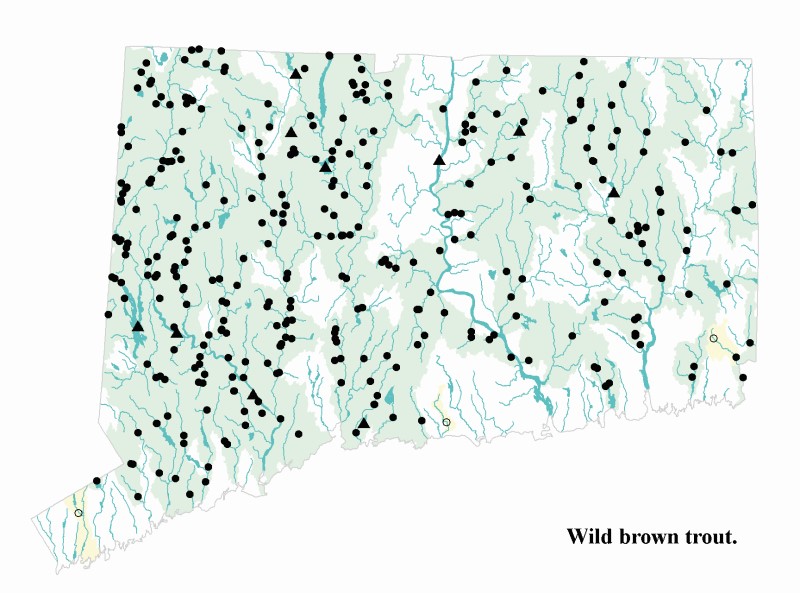 Habits. Brown trout prefer coldwater streams with gravel to cobble bottoms and adequate cover (boulders, dead trees, undercut banks). They can survive over summer only in lakes and streams that retain some amount of cold, well-oxygenated water. 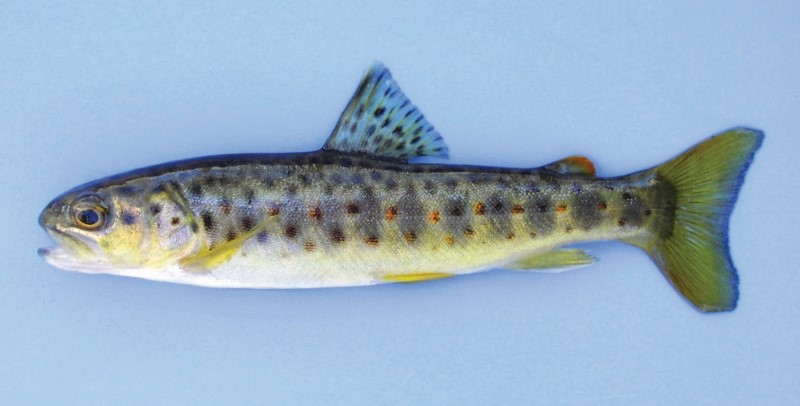 Comments. Typically more difficult to catch on rod and reel than brook or rainbow trout. Despite this, most stocked brown trout are harvested quickly by anglers. Brown trout can tolerate higher water temperatures and lower dissolved oxygen levels than brook trout. 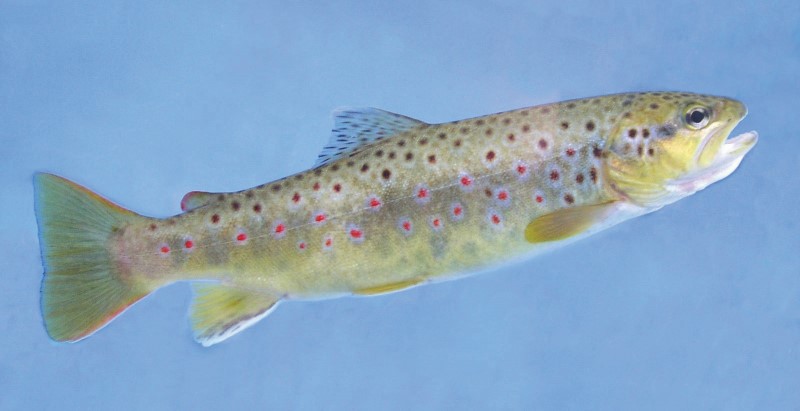 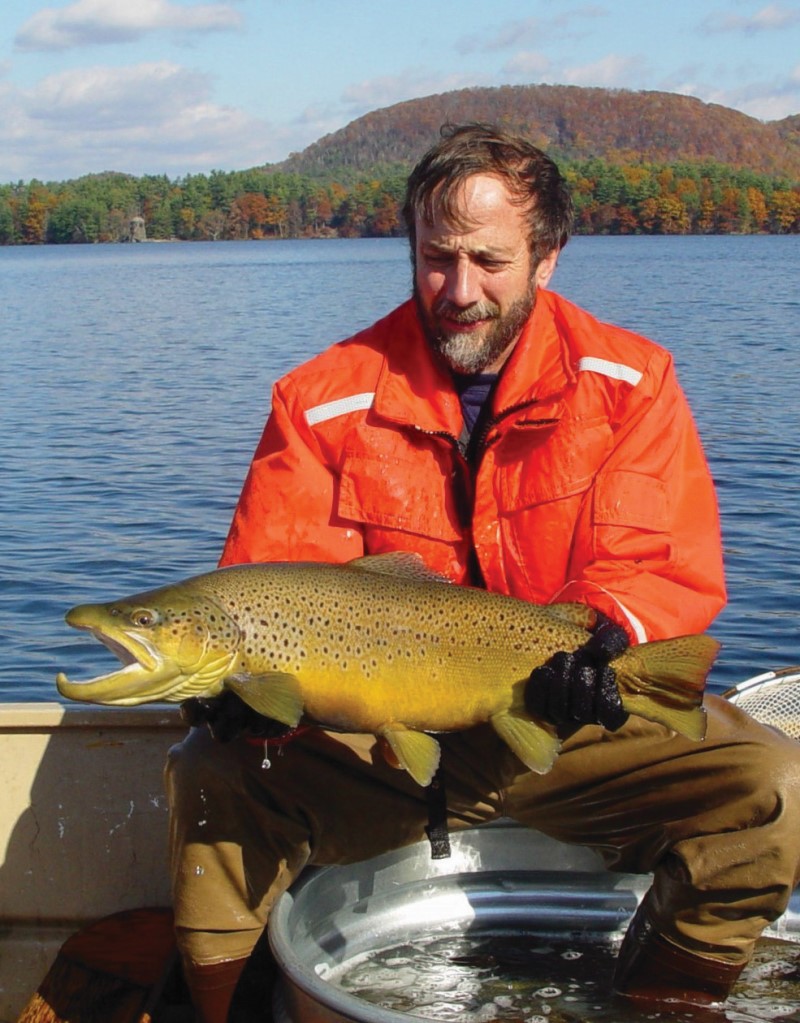 Where habitat is favorable, brown trout can grow large and become a once-in-a-lifetime catch for some lucky angler.