A 3-inch male bluntnose minnow with spawning tubercles (bumps) on its snout.

Identification. Similar to fathead minnow. Streamlined shape. Forked tail with rounded lobes. Snout blunt, especially in males (appears humped or flattened in front). Mouth does not reach end of snout. Complete lateral line with pores outlined in black. Spot at base of tail fin. First ray of dorsal fin short (and thickened in males) and separated from second ray by membrane. Large (typically 44-46 along lateral line), loose scales that come off easily in the hand. Gray to olive on back fading to silvery gray on sides and white on belly. The “blunt” nose is not apparent in juveniles.

Snout shape in bluntnose minnows varies with age and sex.

Distribution. Widespread in the United States and southern Canada from the Mississippi east to the Appalachians. They occur only in the extreme western side of Connecticut in the Housatonic drainage, where they are uncommon to common in abundance. They have only recently (1990s) been found in Connecticut, and their range appears to be expanding. 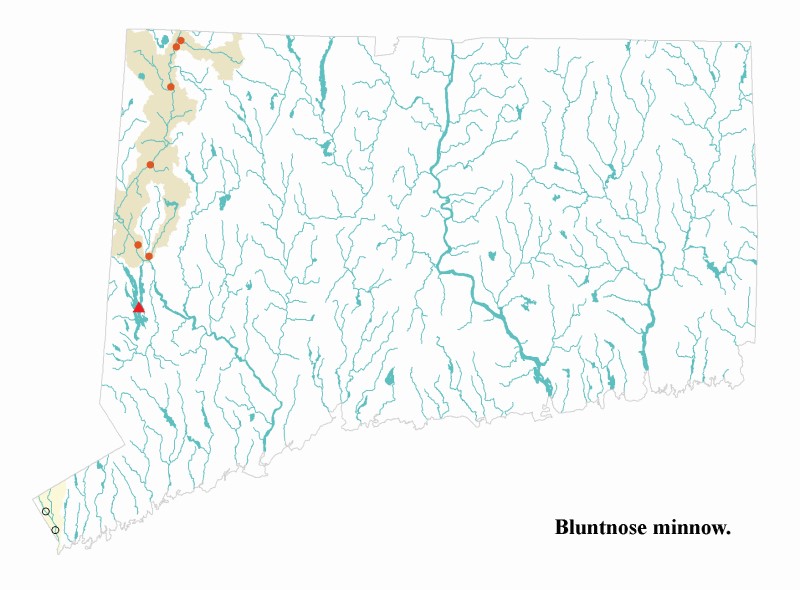 Habits. Seem to prefer small streams with rocky or gravelly bottoms, but can be found almost anywhere, including lakes and ponds. Can be caught with a small-mesh dip net or seine. Easy to keep in home aquariums, but are relatively fragile.

Comments. It is unclear exactly when or how bluntnose minnows arrived in Connecticut. However, they probably moved down from the upper Housatonic drainage in Massachusetts, where they were found as early as 1979, probably the result of angler bait bucket releases.

This 2-inch sub-adult minnow looks similar to a spottail shiner.