Aquarium photo of a typical blacknose dace with its dark lateral band extending through the eye.

Identification. Streamlined shape. Forked tail rounded at lobes. Barbel at corner of mouth. Snout projecting only slightly beyond a downward slanted mouth. There is no groove between the upper lip and the snout. Top edge of mouth about level with lower edge of eye. Distinct dark lateral band from snout through the eye to base of tail. Olive to brown on back. Lateral band typically almost black, often with accompanying narrow, lighter band above. Lower flanks and belly white. May have some small dark blotches on sides.

The barbel in the corner of the mouth is showing in this shot of a blacknose dace.

Distribution. Common throughout North Central and Northeastern United States and southern Canada. Can be found in most small streams in Connecticut, where they are typically common to abundant. They are conspicuously absent from many southeastern Connecticut coastal streams. 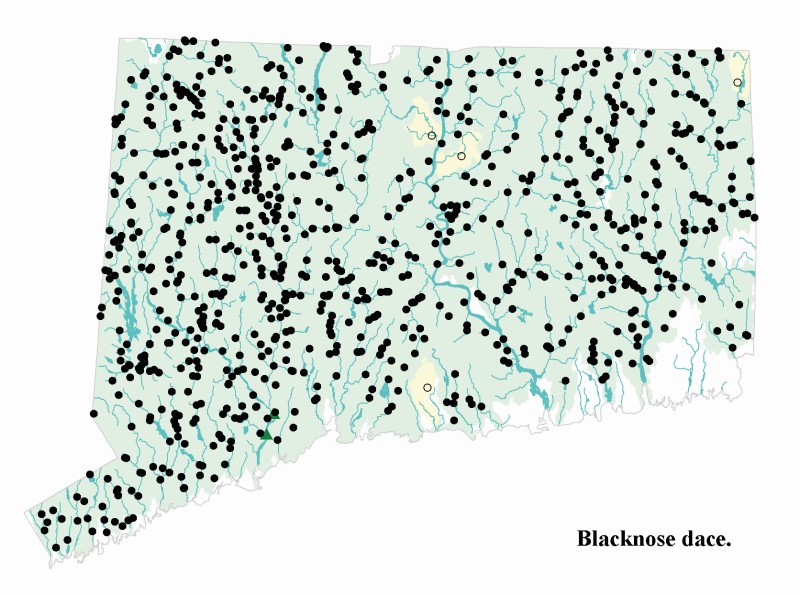 Habits. Prefer pools and rocky riffles of small to medium-sized streams. Typically absent from large rivers and ponds. Can be caught with small-mesh dip net or seine. Easy to keep in home aquariums. Will take flake food, but need cooler water (below 65º F) and won’t thrive in the presence of larger fish. Tend to jump out of uncovered tanks.

The dark lateral band is prominent even on this 1.2-inch juvenile blacknose dace.