Identification. Anal rays 7-11. Adults - Similar to brown trout. Dark spots on a light back-ground. Some spots may be X-shaped, but otherwise tend to be more irregularly shaped than those of brown trout. Few spots if any on tail, adipose or dorsal fins. Mouth smaller than other trouts, jaw extends only to or slightly past the posterior margin of eye. Pectoral fins larger than those of trout. Tail large and squared off at end. No reddish spots or halos around spots. Teeth on center roof of mouth in a single row and more weakly developed than those of a brown trout. Caudal peduncle is narrow and thickens toward the tail (you can “tail” a salmon, i.e. hold it up by its tail). Adult sea-run fish, fresh from the ocean, are usually blue-green on back and bright chrome silver on sides. As fall approaches, fish take on spawning colors that often resemble brown trout — females are bronze to olive on their backs and upper flanks and dusky gray on their lower flanks and belly. Males are a dark, reddish brown with a whitish belly. Stocked broodstock are usually brown on the back and brown to silver on the sides. Breeding males develop a hooked jaw in the fall and can be very dark. Parr - Edge of adipose fin clear, without dark border. 8-11 dark parr marks, with a single reddish spot between most. Spaces between parr marks usually less than width of parr marks. Caudal fin deeply forked. Pectoral fin at least as long as total length of depressed dorsal fin. Jaw extends only to middle or rear edge of pupil. Color variable, typically greenish-brown to gray on the back, fading to tan, silver or white on sides. Smolts - Dark, blackish-green on the back to bright silver on sides. Fin margins black. Eyes large. Most smolts tend to be thin, almost emaciated-looking. 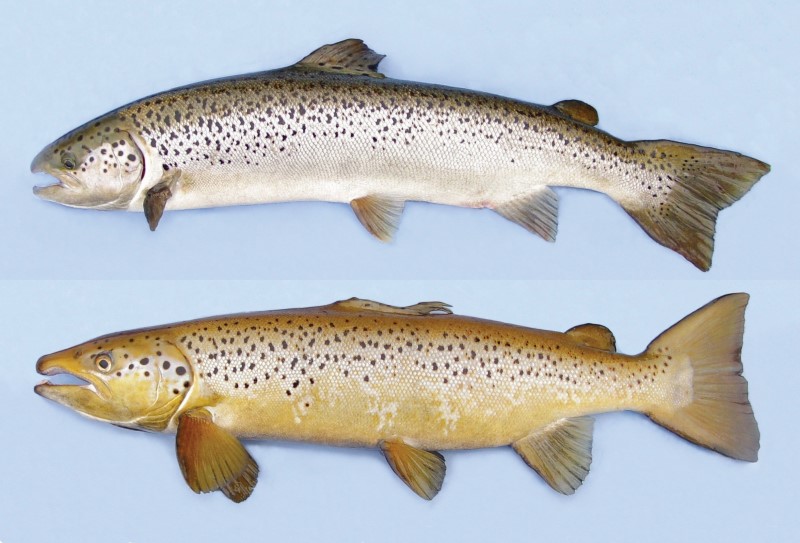 Distribution. Atlantic salmon make spawning runs up major rivers in North America from Quebec to Connecticut and in Europe from the Arctic Circle to Portugal. They also exist in many northern lakes as a landlocked form. In Connecticut, small numbers of anadromous adults run up the Connecticut River and its larger tributaries. Young salmon are stocked into numerous tributary streams within the Connecticut and Pawcatuck River drainages, where they can be abundant. Surplus broodstock adults are stocked during the fall into stretches of the Shetucket and Naugatuck Rivers. 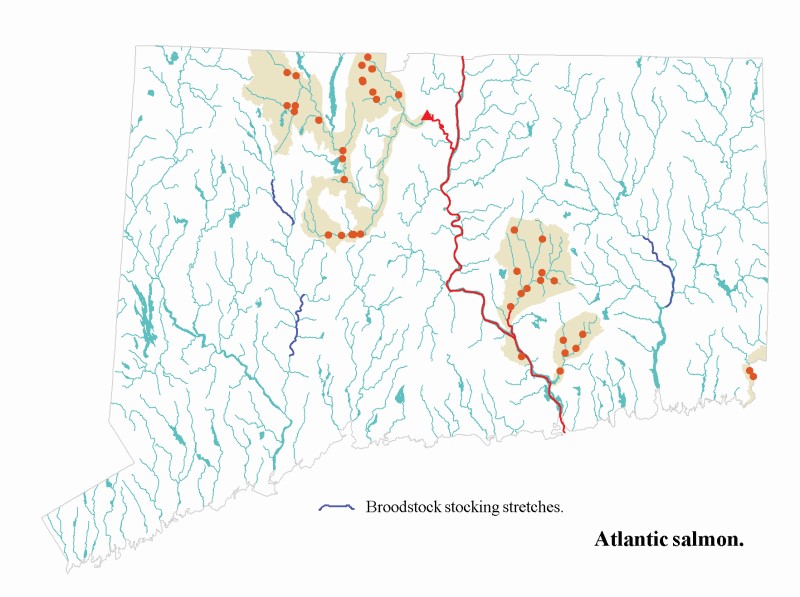 Habits. Atlantic salmon spend 1 to 4 years at sea, after which they return to their river of origin. Their ability to leap over waterfalls is legendary and reflected in their scientific name (salar means “the leaper”). Spawning runs occur during April to June in Connecticut. Once in fresh water, they cease feeding and rest in deep pools until they spawn in the fall. Adults that survive spawning return to the sea until they are ready to make another spawning run. Young salmon (parr) grow for 1 to 2 years in freshwater streams before migrating out to sea as 6- to 9-inch smolts. Although adults do not feed during spawning runs, they will strike at small lures and flies. Smolts are aggressive and easily caught on bait, lures or flies.

Comments. Adult salmon can be very difficult to distinguish from brown trout, with the most reliable distinguishing feature being the nature of the teeth on the roof of the mouth. Native Atlantic salmon runs became extinct in Connecticut by the mid-1800s. In 1967, a major restoration effort was initiated by state and federal fisheries agencies to restore the Connecticut River population. To date, the annual numbers of adult sea-run salmon that successfully return to the river have ranged between 40 and 530 fish. Annual stockings of surplus broodstock (2- to 18-pound hatchery-bred adults that are no longer viable for breeding) have created popular trophy fisheries in two rivers.