This 3-inch Atlantic menhaden looks very much like an adult. Note the large head and mouth, and deep body.

Identification. Deep body. Head large (length about 1/3 of fish length not including tail fin). Pelvic fins with only 7 rays. Mouth large, reaching at least to beneath back of eye in adults. One large spot on shoulder. Lower lobe of tail slightly longer than upper lobe. Typically bluish-green, grayish or brownish on back to silvery on sides and white on belly.

Distribution. Atlantic Coast from Nova Scotia to northern Florida. Can be found along entire Connecticut shoreline and in lower reaches of tidal rivers and creeks. Adults seldom stray far from salt water, but juveniles often move considerable distances up rivers. 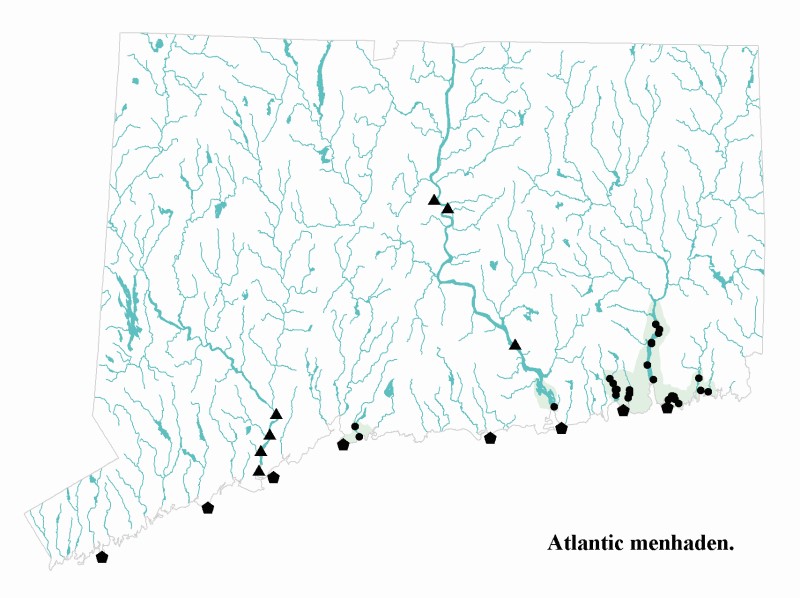 Habits. Menhaden are typically found in large, tightly packed schools. They prefer inshore waters during warmer months and are most common in estuaries and tidal creeks. They spawn and spend the fall and winter offshore of more southern states and migrate north to Connecticut during the spring. Schools typically swim near the surface, where they can often be seen flipping and splashing. They are filter feeders of both zooplankton and phytoplankton; therefore, they are rarely taken by angling. The most popular capture method is by snagging with a weighted treble hook.

Comments. Also known as “mossbunker” or simply “bunker.” Menhaden are important forage fish for large predatory fishes such as striped bass and bluefish. There is a large Atlantic Coast commercial fishery for menhaden. Most of the fish are processed into fishmeal for animal feed and the fish oil is used as a base in food additives. The rest are sold as bait for crabs, lobsters and sport fishing. Menhaden numbers in Connecticut are lower than during the 1970s, but this is considered to be a cyclic phenomenon and the Atlantic population in general is considered to be stable.