Distribution. Anadromous populations occur along the entire Atlantic Coast from Nova Scotia to North Carolina. Landlocked populations have been established in several Atlantic coastal states and in the Great Lakes. In Connecticut, anadromous alewives make early spring spawning runs up many rivers and coastal streams that flow into Long Island Sound. Young alewives feed in the rivers of their birth and migrate to the ocean anywhere from late spring to fall. Some coastal lakes have naturally landlocked alewife populations, but most inland populations were introduced (primarily during the 1960s and 1970s). Both anadromous and landlocked alewives are typically common to abundant where they occur. 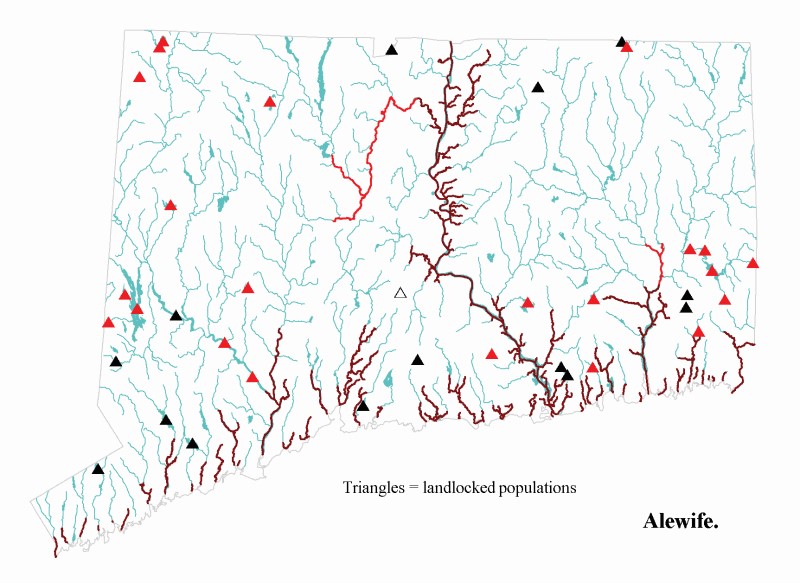 Habits. Alewives are a schooling fish. Anadromous alewives spend most of their adult lives in the ocean and return to the freshwater streams of their origin in the early spring to spawn. They typically spawn in ponds or backwaters of larger streams. Landlocked alewives form large schools that often come into the shallows at night. Adult landlocked alewives and young of anadromous herring species can often be seen flipping (or “popping”) on the surface in the evening. Although they feed primarily on zooplankton, both anadromous and landlocked alewives can be enticed to hit a small jig or fly. Popular methods of catching anadromous herring have been by snagging in mainstem sections of rivers or by dip netting in spawning streams.

A 5-inch landlocked alewife. Alewives are the only herring that currently have landlocked populations in Connecticut.

Comments. The only herring in Connecticut that has landlocked populations. Landlocked alewives are important prey fish for large pelagic predators, such as brown trout. However, because they have a propensity for overgrazing zooplankton, they can cause adverse environmental impacts to water quality, as well as to growth and survival of the young of other fish species. Introduction of alewives (circa 1990) of an unknown source led to the demise of a popular kokanee fishery in East Twin Lake (Salisbury). Anadromous alewives are important forage fish for large gamefish, such as striped bass and bluefish, as well as many other animals, including osprey and marine mammals. Anadromous alewife runs in Connecticut began to increase in response to construction of fishways at dams in the 1980s, but populations declined precipitously during the 1990s for reasons that are not fully understood. One theory is increased predation following the dramatic stock recovery of striped bass. The best way to observe alewife spawning runs is to visit local fishways during warm nights in April.