Marine Fisheries initiated a Lobster Monitoring Program in 1982 to provide basic information needed to assess the long-term health of the Long Island Sound (LIS) lobster population. The Department’s goal is to ensure that the Sound’s lobster population is sustained while also providing opportunity for harvest by commercial and recreational fishermen. The Lobster Program has two main components: 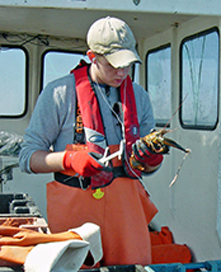 Since 1976 Fisheries Division staff have collected biological information about the size and composition of the commercial catch in the directed lobster-trap fishery. This is accomplished through an at-sea observer program with volunteer Connecticut lobstermen. Division staff join lobstermen on their routine harvest trips leaving ports from Greenwich to Stonington.

During these trips each lobster caught is examined and biological information is recorded. These data include body (carapace) length, sex and health of the egg mass for egg-bearing females. The shell is also examined for signs of physical damage or shell disease. More than 5,000 lobsters are measured in an average year, putting Connecticut at the top of the list of states gathering biological information from this valuable fishery.

Sea-sampling data are used in combination with commercial landings data and LIS Trawl Survey indices of abundance to estimate the size of the lobster population in relation to the number taken by the fishery. Data collected by CT DEEP Marine Fisheries staff are also incorporated into the Atlantic coast lobster stock assessments. 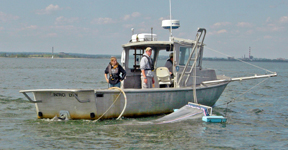 The CT DEEP larval lobster survey began in 1983 and provides an index of stock reproduction in the western basin of Long Island Sound. This time series provides a vital key to understanding relationships among successful reproduction, adult health and abundance, fishing and other causes of mortality.

Each week from May through August the Division’s 27-ft research vessel the Patricia Lynn is used to conduct surface plankton tows in western Long Island Sound. Three five-minute tows are taken at seven stations: two sites each along the Connecticut and Long Island shores and three mid-sound sites. All samples are brought back to the lab where lobster larvae are enumerated by developmental stage. These data provide the Department with an annual production index used in assessing the health of the Long Island Sound lobster population.