The DEEP has been conducting monitoring efforts on both adult and juvenile American shad in the Connecticut River since 1978. Annual harvest, adult abundance and population characteristics such as the sex and age distribution are measured during the spring spawning run. Throughout the summer and into the fall months, we determine relative spawning success of that years’ group of adult spawners and measure potential recruit abundance through the collection of juvenile shad. 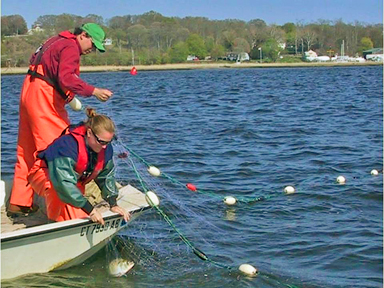 Information on harvest and effort is acquired from commercial fishermen who are required to report daily landings by sex on annual catch report forms. DEEP staff utilized a variety of sampling techniques to characterize the commercial catch by weight and age. Sport fishing for American shad also has a long history in Connecticut. Some credit anglers in the Connecticut River as having developed the practice of angling for shad. At one time, the Connecticut State Shad Fishing Access Area below the Enfield Dam was ‘THE’ place to go on the East Coast of the US. Deterioration of the dam over time has eliminated the temporary stockpiling of shad below the dam, which caused the great fishery there. DEEP staff canvass recreational fishermen through a roving creel census to determine catch, catch rates and total harvest. Given the low numbers of anglers pursuing shad and restricted budgets, creel surveys will be conducted once every five years in the future or until such time as the fishery improves greatly or becomes a major source of mortality.

Juvenile American shad are collected weekly at seven stations from Massachusetts down to Essex, CT from July through October. Each station is fished with a 60 foot beach seine set offshore with a boat and hauled in with 100 foot seine ropes. A crew of four is required to pull the net in and sort and count fish to the species level. All non-clupeids are released, usually none the worse for the experience. Distinction between the closely related American shad, blueback herring and alewife is based on mouth opening and tongue pigmentation. These 3 species are in the herring family clupeidae and within the genus Alosa. Since there are three ‘Alosines’ all clupeids are returned to the laboratory for species identification, counting and measurement. The annual index of relative abundance of American shad is the simple arithmetic mean catch or the average number of shad collected in each seine haul from all stations and dates combined. The index has ranged from 4 to 148, with recent years ranging from 15 to 95. 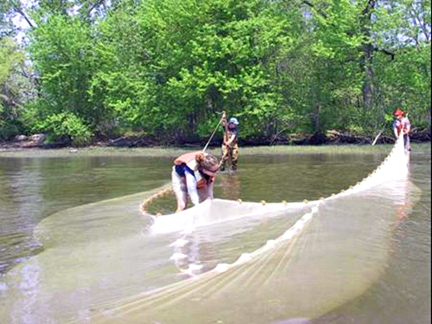 In recent years, some concern has arisen over the low numbers of adult shad returning to the Connecticut River to spawn and the reasons for their decline. It remains unknown how low the adult population will go, but there should be some comfort in the fact that clupeids are very prolific and are known for their ‘boom or bust’ numbers. This means that even relatively small numbers of adults can produce large numbers of juveniles helping to sustain the population through periods of low abundance. Statistical evidence suggests that the cause for the decline linked to the greatly increased number of striped bass along the East Coast of the US and not to coastal or in river fisheries. This is also some comfort in that predators don’t usually cause their prey species to completely disappear; they usually switch to another common prey species first. Abundance of American shad in the Connecticut River is likely to continue to wax and wane over time, but it is expected that the Connecticut State fish will continue to return to the Connecticut River as it has since the last glaciation.

To learn more, see our American Shad and the Connecticut River story map.