Living on the Shore: Shoreline Protection

Living on Connecticut’s shore means dealing with occasional, and occasionally severe, coastal hazards such as erosion and flooding. The coastal geology of Long Island Sound is in constant flux: some areas are eroding, others ”accrete“ or add sand, and still others erode and accrete depending on weather and seasonal factors.

These coastal processes cannot be considered in isolation; a delightful sandy beach at one location may not be able to sustain itself without a source of sand from an eroding shore formation elsewhere. While coastal geological processes comprise a dynamic system tending toward long-term equilibrium, the short-term instability caused by moving shorelines can become inconvenient or even dangerous for man’s uses. Property owners who expect that a sandy beach will always be there, or assume that the boundaries of a waterfront parcel will remain fixed, often find themselves confounded by the forces of nature.

To protect property from natural forces, much of the Connecticut shore has been engineered in some manner, using groins, seawalls, jetties, bulkheads and similar ”hard“ structures. Such structures are very expensive and ultimately fail to defeat the sea. Even worse, many shoreline protections cause unintended consequences and can actually be counterproductive. Seawalls, for example, can cause erosion of the beach in front of them as well as the eventual undermining of the seawall itself by reflecting rather than absorbing wave energy as a beach does. Perpendicular groins interrupt sand movement in unexpected ways, starving some beaches and creating others. 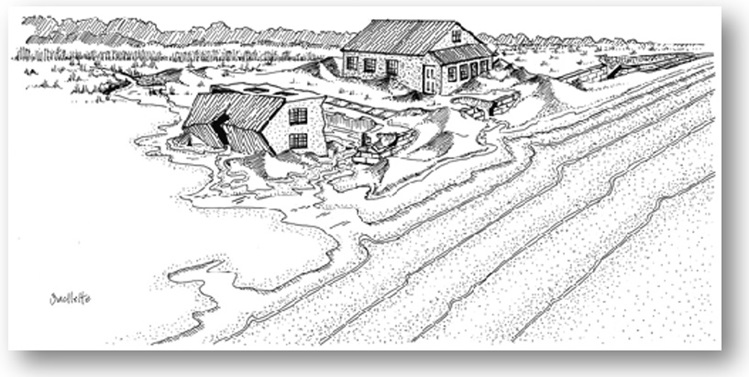 In general, a sandy beach cannot maintain itself without a supply of sediment from an eroding beach or shoreline elsewhere. As a result, “hard” structures which stop erosion in one place do not increase the overall supply of sand, but only reduce the supply or change its distribution. Cumulatively, each individual bulkhead or seawall makes the entire shoreline less stable in the long run.

In addition, while seawalls and bulkheads may provide localized, temporary protection against erosion, they are often of little or no use against flood hazards. Much coastal flood damage is caused not by wave action but by backflooding from wetlands and streams behind the shorefront and can only be avoided by elevation or relocation of threatened structures. Over the long term, coastal flooding can be expected to present more serious problems as increasing land development reduces natural flood storage capacity while increasing stormwater runoff. The potential for flooding is likely to be further increased as sea level continues to rise at an observed rate of approximately 1/8 inch per year.

Because of the complex and dynamic interrelationships among coastal processes, shoreline flood and erosion control structures are strictly regulated by the DEEP coastal permit program and are discouraged by the policies of the Connecticut Coastal Management Act. By law, bulkheads, seawalls, revetments, jetties and groins may only be permitted to protect existing inhabited structures, water dependent uses such as marinas, or infrastructure facilities—and then only when there is no alternative with less environmental impact. Many non-structural options may be available, including beach nourishment, vegetative stabilization, dune creation, or elevating, flood-proofing, or relocating buildings. Indeed, the best and cheapest way to protect any newly-built structure—and the people who live in it—is simply to locate the structure a safe distance from the water.

Of course, no one expects coastal property owners to sit back and allow their properties to fall into the sea. Coastal management standards do permit repair of existing structures and construction of erosion control measures necessary to protect homes, and the Office of Long Island Sound Programs routinely issues many authorizations for such maintenance. However, a new bulkhead or seawall designed to expand a backyard or a building lot is unlikely to be permitted. In addition to the adverse environmental impacts of such structures, the “protection” they afford is not an inherent property right. Connecticut law has long recognized that natural coastal processes such as erosion or accretion change coastal property boundaries. Accordingly, a property owner is not automatically entitled to build shoreline protective structures simply to expand or preserve a lot boundary.


Introduction | Access to Your Boat: Your Littoral Rights
Tidal Wetlands | Water Pollution | What You Can Do