The Transportation and Climate Initiative Program (TCI-P) is a historic multi-jurisdictional collaboration to cap and reduce greenhouse gases (GHGs) from the transportation sector and accelerate investments in an equitable, cleaner, and more resilient transportation system for Connecticut and the region. On December 21, 2020, Governor Ned Lamont of Connecticut, Governor Charlie Baker of Massachusetts, Governor Gina Raimondo of Rhode Island, and Mayor Bowser of the District of Columbia signed a Memorandum of Understanding (MOU) agreeing to work to implement TCI-P in their respective jurisdictions. 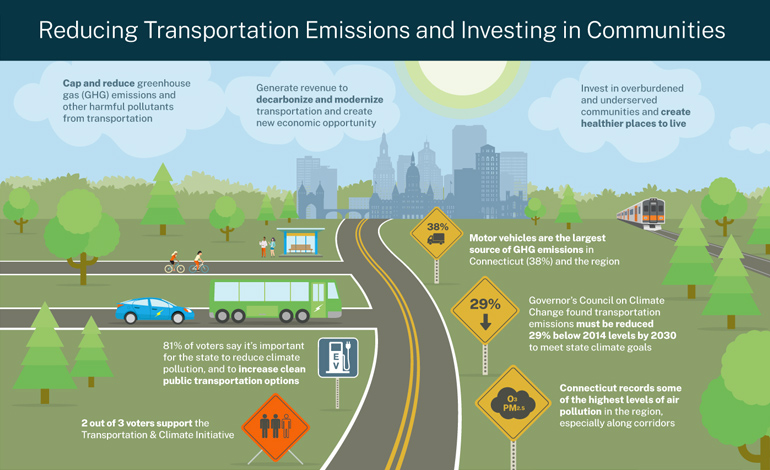 TCI-P will establish a declining cap on carbon dioxide pollution from gasoline and on-road diesel fuel sold into participating jurisdictions, and require fuel suppliers to purchase allowances auctioned by participating jurisdictions to cover the emissions from the fossil fuel components of that fuel. Once implemented, proceeds from allowance auctions are projected to generate up to $89 million in 2023, increasing to as much as $117 million in 2032, for Connecticut to re-invest in clean transportation options and infrastructure. The number of emission allowances would decline each year, guaranteeing at least a 26 percent reduction in carbon emissions from transportation from 2022 to 2032.

Included in the MOU is a commitment by the TCI-P Signatory Jurisdictions to invest no less than 35 percent of their annual program proceeds to assist communities overburdened by transportation pollution and underserved by the current transportation system. Each jurisdiction will designate an Equity Advisory Body with diverse representation and community involvement to advise on developing criteria to identify overburdened and underserved communities, provide recommendations for investments, and assist with developing metrics to evaluate the success of those investments.

TCI-P was developed by an ongoing collaboration of Northeast, Mid-Atlantic, and Southeastern jurisdictions called the Transportation and Climate Initiative (TCI), which seeks to improve transportation, develop the clean energy economy, and reduce carbon emissions from the transportation sector. 12 of these jurisdictions released a joint statement signaling their continued commitment to working with the Signatory Jurisdictions on the development of the details of the regional program while pursuing state specific initiatives to reduce emissions and provide clean transportation solutions.

Questions? Visit our FAQ webpage. Additional questions can be submitted to TCI@ct.gov.

You can learn more about this historic action here. Visit back often to stay updated as we move toward implementing TCI-P in Connecticut.