What is an EV? 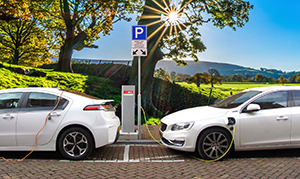 EV stands for Electric Vehicle. EV is the generic term for any vehicle that uses electricity to power the motor for propulsion. The electricity can come from a battery, a fuel cell, or even a small engine on the vehicle.

The batteries of an EV vary in size and receive a charge by plugging the vehicle into an electrical power source such as an EV charging station or a typical household electrical outlet.

Both heavy-duty and light duty EVs are commercially available and are typically more expensive than similar conventional vehicles, but some cost can be recovered through a federal tax credit, a state incentive, or the many other cost saving benefits of EVs.

BEV stands for Battery Electric Vehicle. BEVs are EVs that use large batteries exclusively to power the electric motor; the vehicle does not contain a conventional fuel injected engine. BEVs emit no tailpipe emissions, although the power plant producing the electricity may emit them.

The batteries of BEVs require periodic charging to operate. There are BEVs available today with a range of 300 miles or more per charge!

PHEV stands for Plug-In Hybrid Electric Vehicle. PHEVs are EVs that contain both an electric motor and a gasoline engine. A PHEV can drive exclusively on electricity, powered by the on-board batteries that can be charged by plugging into a charging station or a typical household outlet. The range extending gasoline engine of a PHEV allows the driver a seamless transition between the electric miles used and the miles driven on gasoline.

PHEVs generally have an all-electric range of 15-50 miles but with the addition of a gasoline engine, the total range of these vehicles can exceed 600 miles per tank of gas. PHEVs emit no tailpipe emissions when driving in electric only mode.

FCEV stands for Fuel Cell Electric Vehicle. FCEVs are EVs where the electricity is generated by combining hydrogen with oxygen from the air in a fuel cell stack to produce electricity. The electricity produced by the fuel cell drives the electric motor. To find out more about how fuel cells work, fueleconomy.gov has a nice explanation of the technology and chemistry.

FCEVs typically have a range similar to their gasoline counterparts and refueling a FCEV with hydrogen takes only 5 minutes. FCEVs produce no harmful tailpipe emissions, the only emission from the tailpipe being water.

MPG vs MPGe...What's the difference?

Because of the growth of EVs and other alternate-fuel vehicles, EPA developed MPGe as a way to reasonably compare values across all vehicle types. Whereas the traditional MPG calculates the number of miles that you could drive on a gallon of fuel, MPGe calculates the number of miles that a vehicle can be driven on a quantity of fuel/electricity with the same energy content as a gallon of gasoline.

You can find out much more about the new labels at fueleconomy.gov.

Where do I charge or refuel my EV?

Why would I want to purchase an EV?

Its simple...Quality, Cost, Confidence and Enthusiasm.

Discover the benefits of purchasing and owning an EV in Connecticut and visit Drive Change. Drive Electric. to learn the facts about EVs!

Where does the electricity for EVs come from? 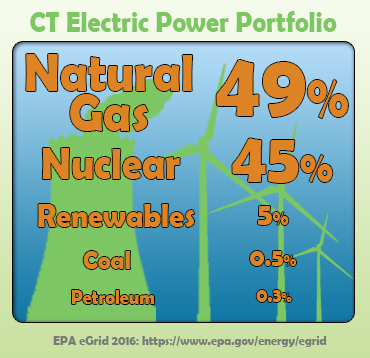 An EV is only as clean as the energy used to power it.

In Connecticut, we have one of the cleanest grids in the nation because we invest in lower polluting cleaner and renewable technologies, and reduce demand for power through investments in energy efficiency. This means that driving an EV in Connecticut is better for the environment than driving one in almost any other state.

Connecticut has one of the cleanest energy portfolios for carbon dioxide (CO2) emissions in the country, making EVs significantly better for the environment than conventional vehicles.

Because of Connecticut's clean energy production, carbon dioxide equivalent (CO2e) emissions of EVs are significantly lower in Connecticut than the national average.

Fuel cells convert hydrogen fuel to electricity to power a battery for a vehicle's motor. The only emission from the vehicle is water, any potential harmful emissions associated with fuel cell vehicles come from the production and distribution of the hydrogen fuel.

Ideally, solar or wind power would be used to produce hydrogen, eliminating any emissions from the generation of hydrogen. Typically, hydrogen is derived from natural gas by steam reforming. It can also be derived directly from water by electrolysis, but this process is less efficient due to the large quantity of energy required.

Where do I find out more about EVs?

By showcasing to drivers and passengers the convenience, affordability, technology, sustainability and power performance of electric vehicles, Drive Change. Drive Electric. aims to put more electric cars on the road than ever before.

Destination Electric introduces you to your next big adventure! Small businesses across the Northeast are joining Destination Electric to show you just how great life can be with an electric car. A life full of exploring new places and uncovering your greatest memories is ahead of you, and an electric car can get you there. Check out the list of Connecticut small businesses that support clean vehicles!

fueleconomy.gov is the official US government source for fuel economy information. It is an excellent place to start your search for a new EV. You can choose and compare vehicles side by side, find out detailed information about the various EV technologies, and learn much. much more about EVs. Developed by the US Department of Energy.

Please contact us at DEEP.mobilesources@ct.gov if you have questions or need further information.