Why is chronic absence an important issue for Connecticut? 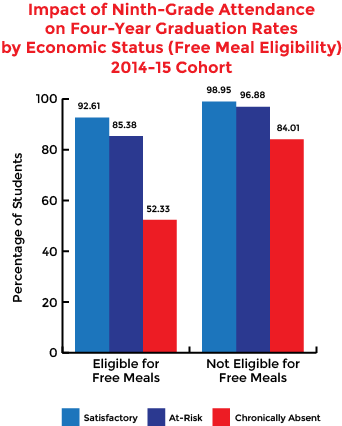 National research shows that at every age and every stage, chronic absenteeism erodes the academic and social skills needed to succeed in school. Children living in poverty are more likely to be chronically absent at a young age because of challenges such as a lack of access to health care, housing insecurity, and unreliable transportation. They are also more likely to suffer academically from those missed days because their families often lack the resources to make up for lost time (Ready, 2016).

Being chronically absent significantly affects a student’s ability to read at grade level, perform academically, and graduate on time. Children who are chronically absent in both kindergarten and first grade are much less likely to read proficiently by the end of third grade (Campaign for Grade Level Reading and Attendance Works, 2014). By sixth grade, chronic absence is a key early indicator of dropout from high school (Baltimore Education Research Consortium, 2011). By ninth grade, attendance may be a better indicator of dropout than eighth-grade test scores (Allensworth, 2014). The graph above displays attendance in grade 9 and graduation in four years by meal eligibility in 2014-15.

According to CSDE data, 50,376 students were chronically absent from school during the 2015–16 school year. This is just under 1 out of 10 of all students in Connecticut public schools. Some other facts:

When chronic absence is widespread, it can affect teaching and learning for the whole class. Teachers must deal with classroom churn and continually play catch up for a different group of students and help students learn material covered during their absences. Research from Urban Education shows that chronic absenteeism has a damaging effect on students missing excessive school days, but also has the potential to reduce outcomes for others in the same educational setting (Attendance Works, 2014).

Finally, if chronic absence reaches high levels in a school, it can be an indication of systematic challenges within neighborhoods that create barriers to going to school. These can include unstable housing, unreliable transportation, community violence, environmental hazards, or a lack of access to health care. Other times, high absenteeism rates can point to problems with the school itself: ineffective instruction, high rates of teacher turnover, a poor school climate, and ineffective school discipline. (Attendance Works, 2014).