What is chronic absence?

Chronic absence is defined as missing 10 percent or greater of the total number of days enrolled during the school year for any reason. It includes both excused, unexcused, out-of-school suspensions, and in-school suspensions that last more than one-half of the school day. For example, a student who has been enrolled for the first 30 school days at the beginning of the school year and has been absent three of those days is chronically absent. 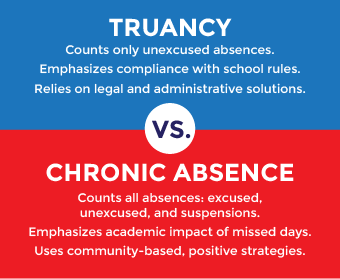 Chronic absence is different from truancy (missing too much school without permission) as well as average daily attendance (a school-level measure, not a student- level indicator, for how many students are typically in attendance at school each day).

For more detail on determining if an absence is excused or unexcused, download the CSDE guidance document for excused and unexcused absences.

Chronic absence, on the other hand, incorporates all absences: excused, unexcused absences, and suspen- sions and expulsions served. By monitoring chronic absence, the focus is on the academic consequences of lost instructional time and on preventing absences before students fall behind in school. It is an early indicator that a student may fall behind in the classroom.

Just two days per month can lead to chronic absence. 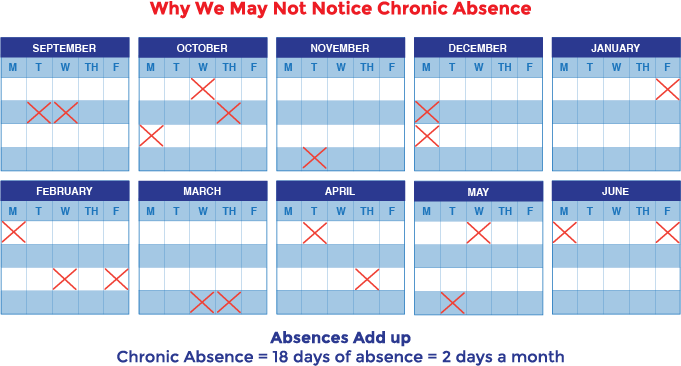 Chronically absent means a child enrolled in a school under the jurisdiction of a local or regional board of education whose total number of absences, at any time during a school year, is equal to or greater than 10 percent of the total numbers of days a student is enrolled during such school year.

A student is considered to be “in attendance” if present at his/her assigned school, or an activity sponsored by the school (e.g., field trip), for at least half of the regular school day. Students are absent when serving an out-of-school suspension or expulsion.

According to this policy, a student who is not “in attendance” is considered absent. The definitions of excused and unexcused absences apply only to those absences that meet the standards of the State Board of Education guidance on excused and unexcused absences. For example, the definitions do not apply to tardy students (i.e., those late for school but who would be considered as “in attendance” according to the above policy).