How do we know if chronic absence is affecting learning in our district?

Determining the scope and scale of chronic absence in districts requires using attendance data to calculate chronic absence rates. Districts and schools should use real time local attendance data from their longitudinal student data system on a regular basis as an early indicator. The CSDE collects data annually and has developed systems to generate data and indicate progress by district and school.

In 2016, the CSDE launched the Next Generation Accountability System for Districts and Schools. This new system contains a broad set of 12 indicators that help tell the story of how well a school is preparing its students for success in college, careers, and life. It moves beyond test scores and graduation rates and instead provides a more holistic, multifactor perspective of district and school performance and incorporates student growth over time. One of the 12 indicators measures chronic absenteeism. The system generates reports at the district and school level.

In addition, the CSDE has developed EdSight, an online data portal that allows for chronic absence to be disaggregated by race, gender, grade, English learners, disability, and low-income statuses. This website provides aggregate trend data for schools and districts, including relevant information on students, educators, and instruction. Important links on this portal also include the Next Generation Accountability Results and school and district Profile and Performance Reports.

District chronic absenteeism rate means the total number of chronically absent students (K-12) under the jurisdiction of a local or regional board of education in the previous school year divided by the total number of students under the jurisdiction of such board for such school year. All absences, whether excused, unexcused, or resulting from suspensions, count when determining a chronic absence rate.

Average Daily Attendance (ADA) rates can easily mask chronic absence. ADA is a school-level measure not a student-level indicator that shows how many students were in school, not which specific students are at risk due to chronic poor attendance. It is problematic in the same way that an average third-grade reading score does not identify students who need additional intensive reading assistance. The following two graphs (Chang, Russell-Tucker, & Sullivan, 2016) depict eight Alliance Districts with Network Schools and visually demonstrate the masking effect that average daily attendance rates can have on chronic absence rates. The graphs together also show the impact state and local efforts have had in reducing chronic absenteeism rates. 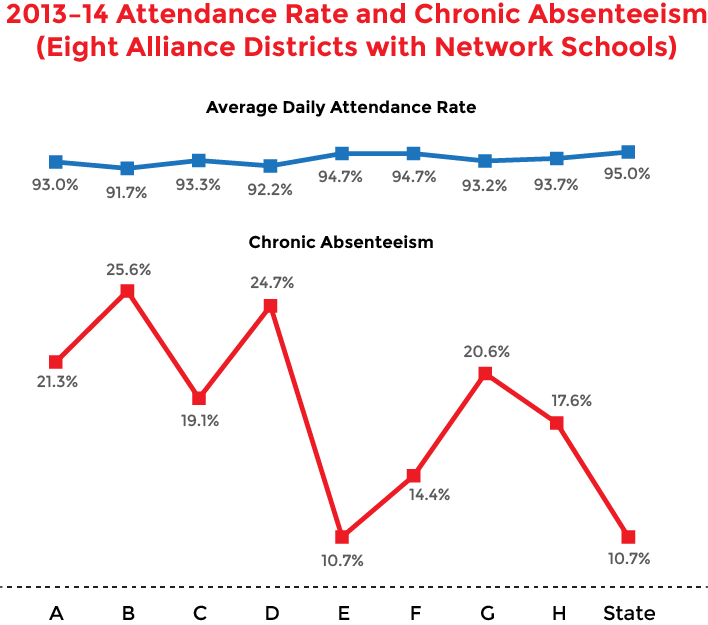 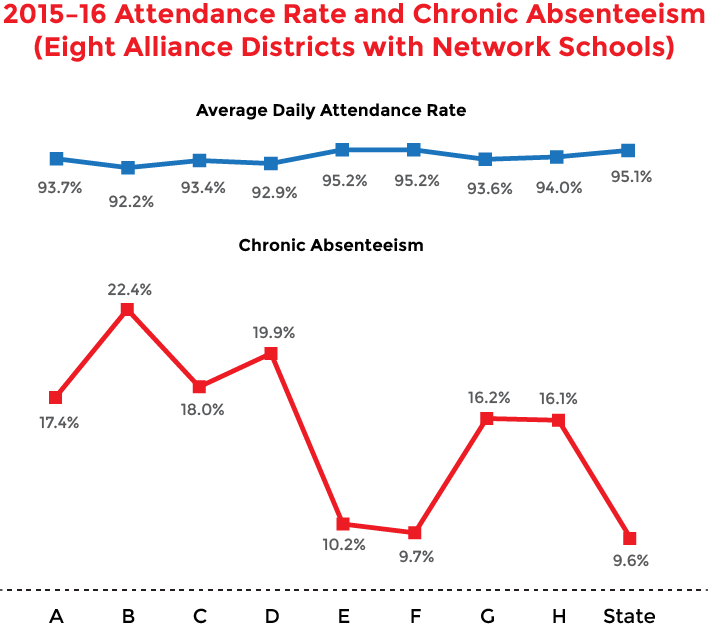