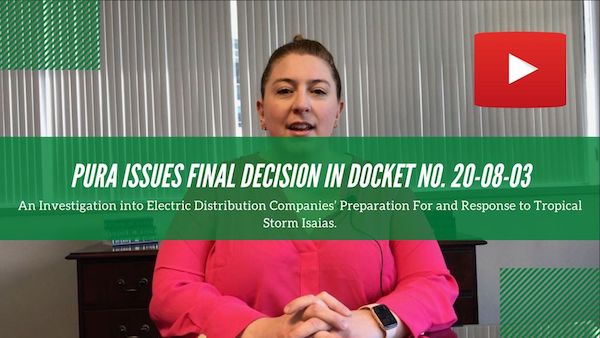 Today’s final decision in Docket No. 20-08-03 concludes an eight-month investigation following Governor Ned Lamont’s request for PURA to initiate a comprehensive investigation into how Connecticut’s Electric Distribution Companies (EDCs) prepared for and responded to the August 4, 2020 storm. Through the course of its investigation, PURA gathered extensive evidence regarding how each EDC performed before, during and after the storm that left over 1 million residents and businesses without power for an extended period in the midst of a global pandemic and a summer heat wave.

The investigation considered more than 500 written comments from the public, including 48 sets of comments from public officials, all of which expressed universal frustration with the EDCs’ response to Tropical Storm Isaias. The overwhelming majority of these comments cited monetary losses incurred from refrigerated items spoiling and other costs associated with buying fuel to back-up generators. Commenters also decried the inability to contact Eversource, and to a lesser extent, UI, to report outages, downed wires and other safety issues in the wake of the storm.

Ultimately, PURA’s decision concludes that Eversource exhibited multiple deficiencies, failing to satisfy established performance standards for managing its municipal liaison program, executing its Make Safe responsibilities, communicating critical information to its customers, and failing to meet its obligation to secure adequate resources in a timely manner to protect the public safety and to provide for the overall public interest. The myriad failures were particularly poignant in the first 48 hours following the tropical storm when their inactions or deficiencies created a significant risk to public safety.

The investigation concluded that UI’s performance was underwhelming in certain areas, but was still markedly better than that of Eversource. While UI secured and deployed adequate line crews for the event, in communities such as Bridgeport, the company failed to meet all of its Make Safe obligations. The investigation also found that UI failed to meet its public safety obligations in responding to the highest priority calls.

Consequently, legally binding orders mandated by today’s decision require numerous enhancements to the EDCs’ emergency response plans to ensure that both the companies and Connecticut ratepayers are better positioned to combat future climate events. PURA also announced that it will immediately move into the second phase of the proceeding – Docket No. 20-08-03RE01 – during which it will consider and enforce any civil penalties and further remedial or enforcement orders.

Due to response and management deficiencies identified during this investigation, PURA will require comprehensive management audits to be performed on Eversource and UI by an independent, third-party firm, to be scoped and commenced this summer.

Further, PURA will also require Eversource and UI to modify their rates in a pending or future rate proceeding to reflect a downward adjustment of 0.90% and 0.15%, respectively, in their allowed rate of return on equity (ROE). This is meant to align the EDCs’ management performance in future storm response efforts with their financial performance.

Chairman Marissa P. Gillett said, “Today’s decision represents the culmination of our months-long, comprehensive investigation, assisted tremendously by the first-hand experiences of customers and municipal leaders. Make no mistake – the decision is a commentary on the deliberate decision by Eversource leaders to manage the company as a corporation, rather than as a utility with a statutory public service obligation. The decision is not a reflection on the commendable efforts of the line workers, field crews, damage assessors and others, who came from near and far to assist Connecticut in our time of need. Now, we must all turn with renewed focus to next steps. I am not satisfied by the status quo of the utilities treating PURA simply as a body that they report information to – we are their regulator, and continuing to hold them to account will remain my mission for the duration of my service in this position.”

Vice Chairman John W. “Jack” Betkoski III said, “It pains me that once again during my long tenure as a PURA Commissioner, I am sitting in judgement of our electric utilities’ response to a tropical storm. I would like to thank all parties that participated in this important docket, especially our exemplary staff at PURA. My colleagues and I spent hours listening to the powerful testimony of the numerous people impacted by the storm. I believe that our recommendations and conclusions in this docketprovide a path forward for our utility companies to respond to significant outages in a prompt, safe and timely manner in the future.”

Commissioner Michael Caron said, “We have the utmost respect for the hardworking people of our electric distribution companies who worked many long and arduous hours bringing the people of Connecticut back online last August and thank them for their efforts. It has been my experience here at PURA that Eversource and United Illuminating are competent, well run and fine Blue Sky companies. However, when it comes to ‘Show Time’ and the spotlight goes on, Eversource proceeds to cower in the corner. Worse, decade after decade it is always the same usual suspects: lack of preparedness, lack of communication, lack of coordination and a lack of timely restoration. This is clearly and simply an illustration of a lack of leadership and an upper management team that is all too comfortable in placing profit over people.”

About the Public Utilities Regulatory Authority:

The Public Utilities Regulatory Authority (PURA) is statutorily-charged with regulating the rates and services of Connecticut's investor owned electricity, natural gas, water and telecommunication companies and is the franchising authority for the state’s cable television companies. In the industries that are still wholly regulated, PURA balances the public’s right to safe, adequate and reliable utility service at reasonable rates with the provider’s right to a reasonable return on its investment. PURA also keeps watch over competitive utility services to promote equity among the competitors while customers reap the price and quality benefits of competition and are protected from unfair business practices. Visit PURA’s website at https://portal.ct.gov/pura.