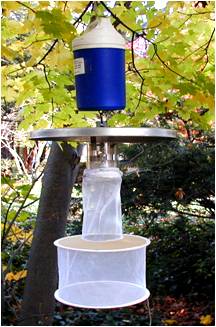 Like any integrated pest management program, accurate monitoring and sampling of mosquito population levels are essential to providing timely and effective management of mosquito outbreaks. Larval sampling is performed on state-owned tidal wetlands throughout the mosquito-breeding season. Information on larval densities, age, and species is used to determine when and where insecticide treatment of larvae should be made. Areas of chronic mosquito breeding may be targeted for marsh management projects which provide long-term biological control by creating shallow ponds for fish that eat mosquito larvae and pupae. Water management also enhances the area for wildlife.

The Connecticut Agricultural Experiment Station (CAES) monitors adult mosquito populations throughout the state by collecting mosquitoes and testing them for the presence of Eastern equine encephalitis (EEE), West Nile virus (WNV), and other arboviruses. Monitoring sites are located in all 8 counties in Connecticut and are checked on a weekly basis from June through October. Portable light traps, baited with carbon dioxide, are used to attract and collect adult mosquitoes. The traps give an indication of mosquito abundance and species composition.

The five agencies involved in the state's Mosquito Management Program have developed response plans to best address any public health or domestic animal issue that may arise from the detection of EEE or WNV. The plans incorporate Connecticut’s testing results, in addition to reports from surrounding states, to determine necessary precautions and actions by state and local officials and the public. The plans include a clear communication system for advising the public of any potential public health threat, precautions that the public should take, and actions to be taken by the DEEP to minimize the chance of human infection.