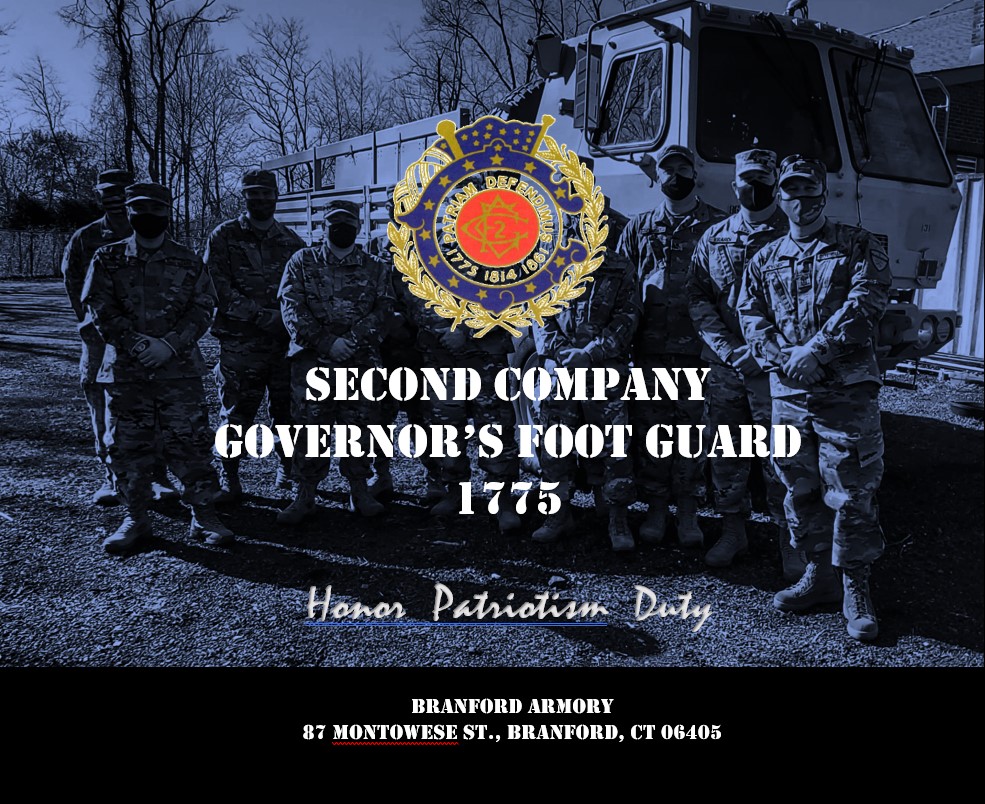 The Second Company Governor’s Foot Guard (2GFG) is an all-volunteer military unit tasked with ceremonial duties under state statute. Together with the other Foot Guard and Horse Guards, the 2GFG is the constitutionally authorized State Militia of the State of Connecticut. Its existence is attributed to Section 27-6a of the General Statutes of the State of Connecticut and operating under the authority of the Connecticut Military Department, it serves as a ceremonial military unit at public and private events whenever and wherever ordered by the Governor or the Adjutant General.

In addition to its ceremonial duties, 2GFG supports the Connecticut Military Department during emergency response and community service activities. It is also tasked with supplementing the forces of the Connecticut National Guard upon the order of the Governor of the State of Connecticut through the Adjutant General. While it’s modern day primary mission is ceremonial in nature, the unit can be deployed to assist in any emergencies and they regularly train to be ready to meet any assignment. As a State Militia Unit, it is not subject to any federal authority, with regard to assignment and/or control and can only operate within the borders of the state, and is unpaid unless called to State Active Duty.

The Second Company Governor’s Foot Guard arose out of exigencies needed during the 1700s to serve and protect the governor between his travels between New Haven and Hartford, both of which served as state capitals until 1875. Its creation is intertwined with its sister unit, the First Company Governor’s Guard.

The first meeting of the Second Company was held at the Beers Tavern, later the site of the Hotel Taft in New Haven, on the evening of December 27, 1774, as the first entry in the Company Record Book shows.

Among the 65 young men gathered on this occasion can be found many names familiar to the student of colonial history: Aaron Burr, who became Vice President of the United States under Jefferson, and a grandson of the Rev. Jonathan Edwards, Pastor of Yale College, and the first Chaplain of Second Company; Ethan Allen, who came down from Litchfield, and who later was to be the leader of the force which captured Fort Ticonderoga, and his brother Ira Allen, later Major General of the forces of Vermont; Hezekiah Sabin, Jr., the second commandant of Second Company who became Lieutenant Colonel in Washington's Army; James Hillhouse, who became a Senator of the United States from Connecticut, and third commandant of Second Company; Nathan Beers, Jr., who later became Captain and Paymaster in the Revolutionary Army on the staff of George Washington; and Pierpont Edwards, later Second Company's First Sergeant, who had prepared the petition for a charter which was presented to the General Assembly, and later becoming the first United States District Judge.

At the start of the American War on Independence, the 2GFG were ordered by the colonial authorities to remain at home and kept their weapons locked up, however, when the news of the Battle of Lexington reached New Haven on April 21, 1775 some 58 of the Guard voted to march to Cambridge to the assistance of their fellow patriots in Massachusetts. Most of the Company who volunteered their services subscribed to a remarkable agreement and proclamation which is set forth in the record and which is the first declaration of any body of citizens or of any military company in this country of armed resistance to the authority of the English Government.

The next day on April 22, 1775, Arnold, the fiery young commander of 2GFG, assembled his men, in full dress, on New Haven Green. They received the blessing of Rev. Jonathan Edwards then, marching up to Beer's Tavern, Arnold demanded of the Selectmen, the key to the King's powder. The Selectmen were reluctant to yield. Arnold, shouting "None but Almighty God shall prevent my marching" forcefully persuaded them to turn over the key enabling him to claim the powder, ball and flint and march with his men to the aid of their fellow patriots in Boston. This was New Haven's first active participation in the Revolution. The pageantry of this exciting historic event is reenacted annually by Second Company. "Powder House Day" has been a yearly tradition in the Elm City since 1904.

Before the war ended, the Guard was once more called out, on Tuesday, September 6, 1814. Information had been received that the enemy, under General Howe, was landing in considerable numbers near Branford. The alarm given, the Guard immediately assembled at the State House. In all 85 officers and men responded to this call and, in addition, 25 young men of the Town and College offered themselves as volunteers and were accepted and furnished with muskets, ammunition, knapsacks, canteens, etc. After waiting for orders to move, all day and into the night, word was received that the British had withdrawn, so the Guard and the rest returned to their homes.

At the conclusion of the conflict, in 1814, there was inserted in the Company records, a list of 47 members of Second Company who had died in the service of their country, while aboard U.S. merchant or naval vessels, or as prisoners of war.

The outbreak of the Civil War and the President's call for volunteers in the spring of 1861 met with a prompt response from 2GFG. Governor Buckingham was urged to put it in a position to serve outside the state, but its charter restrictions made it impossible for him to grant the request. Accordingly a "War Company" was formed, of which some 20 of the Guard, who signed the articles of enlistment on August 29, formed the nucleus. Others joined later and the Company was brought up to required strength by enlistments from outside secured by the energetic recruiting of the Guard. On September 9th, 1861, Major Russell W. Norton administered the oath to 52 volunteers and the next day Henry G. Gerrish was elected Captain. Permission for the war company to bear the name of the parent organization was refused and it went out as Company K, 6th Connecticut Volunteers. Numbering 88 officers and men it left for the front on October 22, 1861 and from that time until it was mustered out on August 21, 1865 it took part in 26 battles and skirmishes and sustained a loss of 13 dead, and 11 wounded. Numbered among the dead was Captain Gerrish.

At home, throughout the conflict, 2GFG added to its ranks, purchased equipment, and drilled regularly thus keeping in shape in case the Company was called for duty. Because of this there were few social activities.

In December, 1862, in pursuance of an order of the Governor the Company "paraded with muskets for exercise, inspection and drill on the vacant lot corner of Franklin and Grand Streets and in the afternoon, on the Green, the arms were inspected by Captain Corliss of the 5th Connecticut Volunteers who reported them in good condition and highly creditable to the Company. At noon, the Guards were joined by the Wallingford Brass Band, 14 pieces. A result of this parade was that for the third time in its history the Company acquired a band of its own. The previous band, in 1844, had merged with the New Haven Brass Band and since that time the Company had hired musicians for special occasions. At the conclusion of the exercises on the Green the Company assembled at its armory and voted the Wallingford group into membership as the Second Company Governor's Foot Guard Band. Apparently the organization did not hold together long for in less than two years the Company was again hiring musicians.

In the meantime, the increasing probability that the United States would become involved in war provoked measures calculated to put the Company in a state of readiness for any duties it might be called upon to perform. Drills were continued through the summer of 1916 and 1917; one hundred and twelve men and six officers were fitted out with khaki uniforms at the expense of the State, and the rest of the command were equipped by funds from the Company treasury; the major's staff formed itself into a new section known as "Company E." When in April 1917 the United States entered World War I all social activities were suspended. Twenty-four members of the Company enlisted in the army, and the command stood ready to protect the lives and property of the citizens in case they were threatened. It participated, also, in almost every local effort to further the war activities, assisting in the recruiting of the Second Regiment of the National Guard, taking part in Liberty Loan drives, making donations to the Red Cross and other welfare organizations, assisting in the dedication of the Yale Artillery Armory, June 19, 1017, and in the patriotic exercises conducted by the University on the Yale campus, and acting as escort to the Fifth Royal Highlanders of Canada, October 11, 1917, when that organization came to New Haven to encourage the enlistment of Britishers in the English Army.

Our Commandant is MAJ John Garcia

Our Quartermaster is CPT Michael Hedman

Our Adjutant is 1LT Steven Allinson

If you are interested, please e-mail us at  2GFG.CTMD@ct.gov. You must be able to maintain a 50% attendance.To join the Second Company, you must be between the ages of 18 and 55, be able to pass a physical and a background check, and be available for drills and parades.  The unit drills every Monday evening at the Branford Armory, in Branford, CT.