An Outbreak of Clostridium Perfringens Associated With a Connecticut Healthcare Facility, May 2021

On May 13, 2021, a Connecticut healthcare facility reported multiple incidents of gastrointestinal illness (GI) among employees to the Connecticut Department of Public Health (DPH) Epidemiology and Emerging Infections Program (EEIP). The initial report indicated that an estimated 30 staff members called out ill or came to work with GI symptoms following a facility-wide event on May 12th. During this event, employees were served a chicken taco lunch from a food truck. Staff from EEIP, the Food Protection Program (FPP), and the local health department (LHD) conducted a joint investigation to better understand the extent and  source of the outbreak and to implement control measures.

To gather symptom and exposure information, a standardized investigation questionnaire was developed by DPH staff using SurveyMonkey®.  A link to the survey was shared with the facility and distributed to employees.  A case was defined as vomiting and/or diarrhea (3 or more stools in a      24-hour period) in an employee who responded to the survey and with symptom onset May 12–13. A total of 149 employees responded to the survey and of those, 101 reported eating from the food truck on May 12th.

The LHD began the environmental investigation of the food truck on May 14th. The event was sponsored by a local church which had partnered with the food truck to provide the onsite food distribution at the healthcare facility. Volunteers from the church helped prepare the food in the church kitchen.

Interviews with the FWs revealed that seven cases (roughly 140 lbs.) of boneless skinless chicken thigh meat were purchased for the event and stored in a cooler at the church kitchen. The chicken was cooked on the stove in the kitchen, but no food thermometer was used to determine the internal temperature of the cooked chicken. The produce and salsa were also reportedly prepared in the kitchen. Approximately 750 soft tacos were assembled in the kitchen and included chicken, mozzarella style cheese, tomato, and lettuce on a tortilla. Sour cream and salsa were served on the side. The tacos were then delivered to the food truck and left at room temperature until arriving at the healthcare facility where they were placed briefly on a griddle. The tacos were served to employees in take-out containers. Food preparation began at 5:00 a.m. and lunch service ended at 2:30 p.m.

A total of 9 specimens from 4 ill patrons and 5 FWs were tested at the DPH State Public Health Laboratory (SPHL). All specimens tested negative for Norovirus by reverse transcription polymerase chain reaction (RT-PCR) using the GeneXpert. Specimens were also tested using the BioFire® GI panel (which has 22 pathogen targets on its multiplex PCR assay). Five specimens tested positive for a variety of pathogens including Enteropathogenic Escherichia coli (EPEC), giardia, and Clostridioides difficile. Because incidental findings can occur due to the highly sensitive nature of the multiplex GI panel, an etiology could not be determined based on these results. Specimens were forwarded to the Centers for Disease Control and Prevention (CDC) for further testing.

All 9 specimens were tested at CDC and 4 (1 patron, 3 FWs) were positive for Clostridium perfringens enterotoxin by a reverse passive latex agglutination (RPLA) test.

Clostridium perfringens is one of the most common causes of foodborne illness, causing an estimated 1 million illnesses a year in the United States (1). It is a Gram-positive, spore-forming bacillus naturally occurring in the environment and intestinal tracts of humans and other warm-blooded mammals (2). Illnesses can occur when foods such as meat or poultry are held without maintaining adequate heating or refrigeration after being cooked (3). Clostridium perfringens bacteria form spores, which act like protective coatings that help the bacteria survive. When food is kept at an unsafe temperature the bacteria can grow and multiply. After the bacteria is ingested, it can produce a toxin that causes diarrhea. Because a common sources of C. perfringens infection includes foods cooked in large batches and held at unsafe temperatures, outbreaks tend to happen in places that serve large groups of people (1).

The incubation time for C. perfringens ranges between 6–25 hours, usually 10–12 hours, and the most common clinical symptoms include diarrhea and abdominal cramps. These symptoms generally last    12–24 hours (4). The infection cannot be passed from one person to another (1).

The epidemiologic, laboratory, and environmental findings indicate that an outbreak of C. perfringens occurred among employees of a healthcare facility in Connecticut. Information obtained during the environmental investigation suggests that chicken is the most likely vehicle for this outbreak. Contributing factors included failing to verify the final cooking temperature of the chicken and temperature abuse of the shredded chicken after cooking, during assembly of the tacos, and during storage prior to service.

To help prevent illness due to C. perfringens, it is important for foods to be cooked to a safe temperature and then kept at  ≥135°F or ≤41°F if not being consumed (5). Leftover foods should be refrigerated within two hours of cooking or within one hour if the temperature outside is above 90°F and the food is outside. Large portions of food should be divided into smaller quantities before being placed in the refrigerator to help the food cool quickly enough to prevent bacterial growth.  Leftovers should be reheated to at least 165°F before consumption (1). 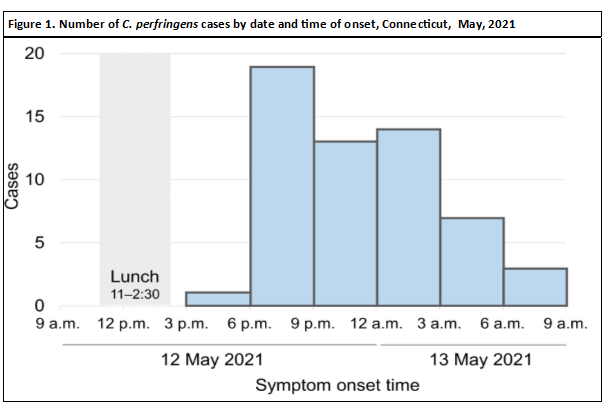