On May 12, 2021, the Connecticut Department of Public Health (DPH) was notified by a local health department (LHD) of a possible foodborne outbreak among patrons of a food service establishment (FSE) in Tolland County. An initial complainant informed the LHD that they were aware of multiple patrons experiencing gastrointestinal illness from this same FSE. The LHD received additional reports of illness over the next several days. DPH staff worked with the LHD and the Yale Emerging Infections Program (EIP) to assess the extent and cause of the outbreak.  Actions included:  gathering illness information from complainants, conducting an epidemiological analysis of the association between implicated food items and illness, performing an environmental assessment of the FSE and laboratory testing of stool specimens from selected ill patrons and food workers (FWs).

A cohort study was conducted among four defined groups of patrons of the FSE. Preliminary information was collected by LHD and DPH staff who interviewed initial complainants from the groups. Data were collected using either a standardized questionnaire or the Foodborne Alert Complaint Form; both included questions about symptoms, onset of illness, foods consumed from the FSE, and contact information for the rest of the dining party. Symptom and exposure information for each patron in the four groups was then gathered by telephone interview, completed by the Yale EIP, or online using a confidential survey.  DPH also developed an online form to assist the local health department with gathering complaints of illness from individuals in the community who ate from the FSE, but were not part of the four identified groups.

A case was defined as an individual experiencing vomiting and/or diarrhea (3 loose stools in 24 hours) who ate from the FSE between May 8, 2021– May 16, 2021. Using information gathered from reports of individual illness complaints and by interviews of dining parties, 110 patrons reported illness after consuming food from the FSE. Illness onsets occurred between May 8th – May 18th (Figure. 1) and 65 (59%) were female. Reported symptoms included nausea (n=105 [95%]), vomiting (n=102 [93%]) and diarrhea (n=102 [93%]). The median incubation period was 34 hours (range 3.5– 186.5 hours). The median duration of illness was 48 hours (range 7–336 hours). Case patients reported being residents of Connecticut, Pennsylvania, Maine, Massachusetts, and Alabama. Three (2.7%) case-patients were hospitalized; no deaths occurred.

Among 52 patrons, from the four different cohorts who responded to either the telephone interview or online survey, 26 (50%) reported illness, meeting the case definition. Seven additional people became sick after exposure to an ill patron and were classified as secondary cases.

On May 13th, the LHD began an onsite environmental investigation of the FSE. During the visit, the LHD interviewed 8 FWs. Stool specimen collection kits were distributed to the FWs, one FW did not submit a sample. During the initial interview process, 5 FWs indicated experiencing symptoms of vomiting and/or diarrhea with onsets of 5/6, 5/9, and 5/10. The owner of the FSE reported having diarrhea on 5/6 after a family member was ill with similar symptoms.

Based on the number of reports about potential ill patrons received by the LHD and the likelihood of additional product present in customer’s homes, the LHD issued an order of closure to the establishment and released a public notification through media channels instructing people to not eat any product purchased from the FSE. The establishment closed on May 13th.

While completing an assessment of the FSE and interview with the owner, the LHD and FPP determined that the establishment did not have any written protocols and procedures to address ill FWs, incidences of vomiting or diarrhea in the establishment, or basic sanitization. There were improper sanitizing methods at the FSE, and no functioning hand soap dispensers at a sink in the food prep area and in the women’s restroom. Bare hands were used to prepare food items at the FSE and disposable gloves were not available for use.

Norovirus is the most common cause of foodborne outbreaks in the United States, accounting for about 50% of outbreaks (1). Infected FWs cause 70% of     Norovirus outbreaks and 1 in 5 have reported working while experiencing vomiting and diarrhea (2). These outbreaks mostly occur in food service  settings when infected FWs touch ready-to-eat foods with bare hands before serving (1). Norovirus is very contagious, easily contaminating food because it only takes a very small amount of virus to make a person sick (3). The virus remains infectious on foods until heated above 140°F, can stay on utensils and countertops up to 2 weeks, and may withstand common disinfectants (2).

The epidemiologic, environmental, and laboratory investigation indicate that an outbreak of Norovirus occurred among patrons of FSE in Tolland County. Donuts were implicated as the vehicle for this out-break, most likely contaminated by a FW working while ill. Contributing factors include the FSE’s lack of adequate facilities to conduct proper handwashing and using bare hands to prepare a ready-to-eat food item. Additionally, the popularity of the FSE and ease of food product distribution to multiple groups of  patrons helped contribute to over 100     illnesses spanning five states. To help prevent        Norovirus outbreaks, it is important to avoid preparing foods while ill, wash hands carefully for at least 20 seconds with warm  water and soap, and   report suspected illness from consuming food to the state or local health department (2). 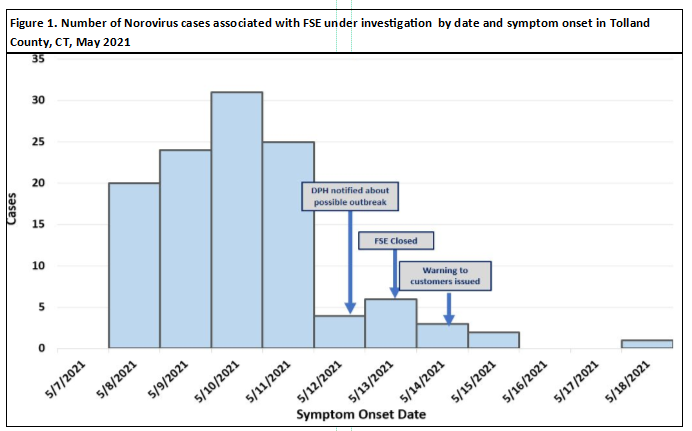