May 20, 2022: the Centers for Disease Control and Prevention listed six Connecticut Counties in the High/Orange category as part of its COVID-19 Community Levels Map. Only Fairfield and Tolland Counties are listed in the Medium/Yellow category. Residents in these counties should wear a mask indoors in public; stay up to date with COVID-19 vaccines and get tested if they have symptoms. Additional precautions may be needed for residents who are at high risk for severe illness. Visit the CDC COVID-19 Community Levels Map for updates.

A Brief History of Lyme Disease in Connecticut 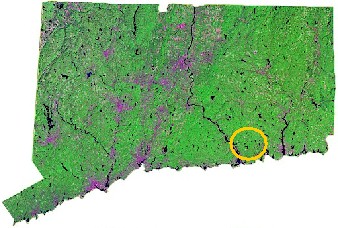 The history of Lyme disease in Connecticut began in 1975 when a cluster of children and adults residing in the Lyme, Connecticut area experienced uncommon arthritic symptoms (1976 circular letter). By 1977, the first 51 cases of Lyme arthritis were described, and the Ixodes scapularis (black-legged) tick was linked to the transmission of the disease. During 1982, Borrelia burgdorferi, the bacterium that causes Lyme disease, was discovered and the first brochure addressing Lyme disease was developed by the Arthritis Foundation. Serology testing became widely available in Connecticut during 1984. In 1987, Lyme disease became a reportable disease. All physicians were required to report any and all cases of the disease. By 1988, the news of Lyme disease spread and national media attention began. The first federal funding for Lyme disease surveillance, education, and research became available in 1991. The first Lyme disease vaccine became available in 1997. To help determine the efficacy of the vaccine, Lyme disease was made laboratory reportable in 1998. However, the manufacturer withdrew the vaccine from the market in 2001. In 2002, the vaccine efficacy study ended, and Lyme disease was removed from the list of laboratory reportable findings; however, it remained a physician reportable disease.

Initially, with little known about Lyme disease, studies and surveys were conducted to determine the occurrence of the disease in Connecticut and factors that favor acquiring the disease. This work was done by the Connecticut Department of Public Health in collaboration with the Connecticut Agricultural Experiment Station, the University of Connecticut, Yale University, local health departments, and the federal Centers for Disease Control and Prevention. The current focus of the Program is on prevention.

The emergence of Lyme disease in Connecticut is attributed in large part to changes in land use. That is, land at one time used for farming has become reforested and increasingly developed for suburban residential use. These changes favor expansion of habitat that supports ticks and wildlife and therefore transmission of tick-borne diseases from animals to people in residential areas and among those who work or recreate outdoors. With no vaccine currently available, prevention is based on avoidance of tick bites through a combination of personal protection and environmental measure.

To help meet the program's mission, The Epidemiology and Emerging Infections Program will continue to maintain surveillance for Lyme disease. Public health surveillance is one of the tools that infectious disease epidemiologists use to monitor the occurrence of diseases of public health importance and assess the effectiveness of control measures. In the United States, the system for reportable diseases works best for diseases that are either rare in occurrence, involve hospitalized patients, or for which there are definitive diagnostic laboratory tests. The system works less well for diseases that are common, diagnosed in outpatient settings, and for which there are no definitive diagnostic laboratory tests. The under-reporting of these diseases, including Lyme disease, is common.

Over the years, epidemiologists from the Department of Public Health (DPH) have used a variety of epidemiological methods -- including active surveillance, population-based surveys, and case-control studies -- to augment the information obtained from the traditional passive surveillance system for Lyme disease. The limitations of the traditional passive surveillance system to monitor the public health impact of Lyme disease are well documented. In February 2012, DPH epidemiologists published an article on the “Effect of Surveillance Method on Reported Characteristics of Lyme Disease, Connecticut, 1996–2007” in the journal Emerging Infectious Diseases (http://wwwnc.cdc.gov/eid/article/18/2/10-1219_article.htm).

On average since 1998, the DPH has reported about 3,000 cases annually to the Centers for Disease Control and Prevention (CDC). Recently, the CDC estimated that there are approximately 10 times more people diagnosed with Lyme disease than the yearly reported number. Using the CDC estimate, approximately 30,000 people are diagnosed with Lyme disease each year in Connecticut.