Vibrio bacteria naturally occur in coastal waters and are more abundant during the summer as the water warms. Vibrio species can cause a wide range of infections in humans, including Vibriosis, which is the leading cause of seafood-associated morbidity and mortality in the U.S. Vibrio parahaemolyticus is the leading cause of seafood-associated gastroenteritis in the U.S and world. Other important Vibrio species include Vibrio vulnificus, which can cause severe wound and blood infections, and Vibrio cholerae, of which nontoxigenic strains can cause gastroenteritis and toxigenic strains can cause cholera. Molluscan shellfish are highly efficient filter feeders and can concentrate Vibrio when present in the water column, which can potentially sicken consumers that eat raw or undercooked seafood. National shellfish sanitation programs monitor Vibrio concentrations in shellfish; implement control plans to reduce the risk of Vibrio illnesses; and conduct traceback illness investigations when Vibrio illnesses are reported to identify implicated states and shellfish growing areas, promptly close harvesting in these growing areas, and recall and destroy contaminated shellfish harvested from these growing areas to prevent further illnesses.

More information about Vibrio parahaemolyticus and other Vibrio species can be found on the Center for Disease Control (CDC) website. 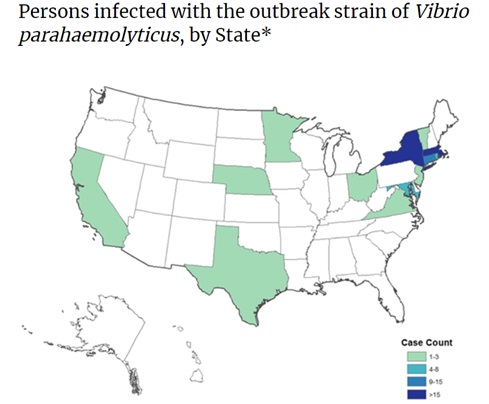 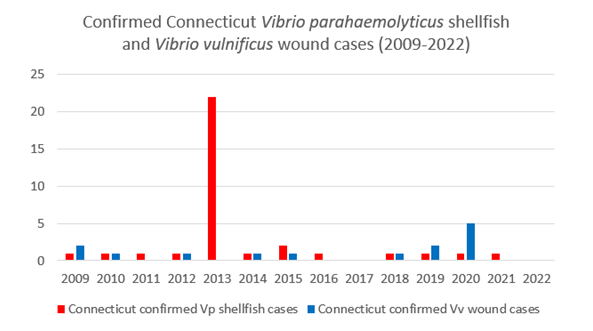 Connecticut shellfish growing areas are annually managed with Vibrio parahaemolyticus Control Plans when water temperatures exceed 68°F, due to the 2013 outbreak. Vibrio vulnificus can cause infections from consumption of raw or undercooked seafood, or through wound contact with seawater or raw or undercooked seafood. To date, there have been no Vibrio vulnificus outbreaks in Connecticut associated with seafood consumption. However, Vibrio vulnificus naturally occurs in Long Island Sound, and can cause wound infections that can lead to limb amputation and sepsis in severe cases. In 2020, there were 5 confirmed Vibrio vulnificus wound infections, while there were only 7 total cases from 2010-2019 (Connecticut Department of Public Health). To minimize the risk of Vibrio vulnificus wound infections, the Department of Public Health recommends staying out of salt and brackish water when wounds are present, or cover wounds with a waterproof bandage if avoidance is not possible. Protective gloves can be worn when crabbing, fishing, and shellfishing. If a wound is sustained, wash the are thoroughly with soap and water.

The Bureau of Aquaculture has prepared a Guidance Document for Recreational Shellfish Harvesting and Vibrio.