Pseudocardinal Teeth: Present and well developed. The stout teeth are buttressed by a heavy ridge.
Nacre: Usually distinctly bicolored. Posterior half thin and an iridescent bluish-pink, and the anterior half thick and usually whitish-pink. 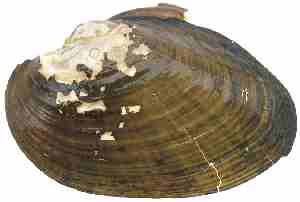 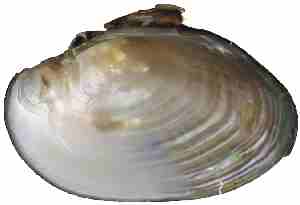 Habitat: The triangle floater is found in streams, rivers, and lakes, where it seems to prefer sand and gravel substrates. It is the only Alasmidonta species in Connecticut that can be found in lakes, though it is more commonly found in small to medium-sized rivers.

Conservation: The triangle floater is widespread in Connecticut and there are many large healthy populations. It seems to be less sensitive to pollution and habitat disturbance—and uses a broader range of host fish—than its close relatives, the brook floater and dwarf wedgemussel. It is an important indicator of river health, and may be declining in southern parts of its range, such as Maryland where it is listed as endangered. It is listed as special concern in Massachusetts and Maine.