Pseudocardinal Teeth: Present. Two on both the right valve and left valve. The teeth are thin and elongate, and are located well anterior of the beak [this feature is important to distinguish this species from the yellow lampmussel].
Nacre: Color pinkish or salmon-colored. 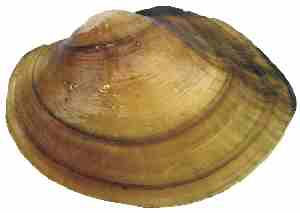 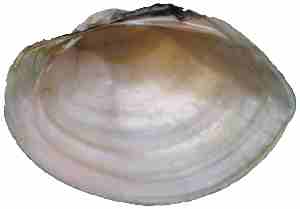 Habitat: The tidewater mucket is usually found in medium to large-sized rivers and coastal ponds, and inhabits a variety of substrates.

Range in Connecticut: Though rare, the tidewater mucket is found throughout the Connecticut River and its tributaries. It has not been found in the Housatonic River watershed since the 1800s.

Conservation: The tidewater mucket is listed as a species of special concern in Connecticut. Some recent evidence suggests that its range may be expanding, presumably due to river restoration and recovery of anadromous fish runs. Thorough surveys in the Connecticut River and its principal tributaries are needed to determine its population status and trends. It is listed as threatened in Maine and special concern in Massachusetts.