Size: Up to six inches.

Pseudocardinal Teeth: Present and well developed—two on the left valve and one on the right valve.
Nacre: Usually white, with faints pits centrally located, each with a faint “tail” that points toward the beak cavity. 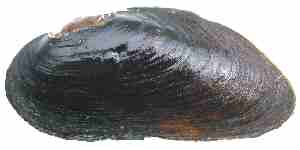 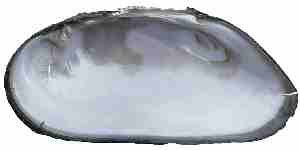 Close-up of pits on the nacre

Habitat: The eastern pearlshell is found in streams and small rivers that support trout or salmon populations, and exists in a variety of substrate. This species is not found in lakes or ponds.

Range in Connecticut: The eastern pearlshell is found in most major watersheds in Connecticut, though it is most common in the northern and northwestern parts of the state.

Conservation: The eastern pearlshell is listed as special concern in Connecticut. The scarcity and continual loss of coldwater habitats in the State contribute to its rarity. It is more common in northern New England where there are more coldwater streams and rivers. Its host fishes include Atlantic salmon, brook trout and brown trout. Climate change may negatively affect this species if rivers become too warm to support trout or salmon.