Size: Up to five inches.

Periostracum: Color tan (juveniles) to dark brown or black (adults). Shell rays may or may not be present.

Pseudocardinal Teeth: Present. Two on the left valve and one on the right valve.
Nacre: Color usually white, rose-colored, or purple, and is often discolored. 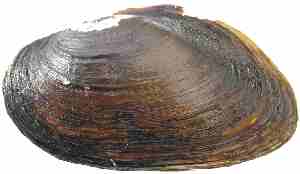 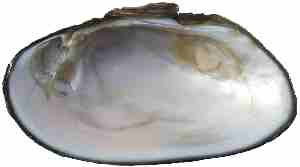 Habitat: The eastern elliptio is found in virtually any large pond, lake, stream, or river, where it is nearly always the most abundant mussel species. It can be found in all types of substrates.

Conservation: The eastern elliptio is the most abundant and widespread freshwater mussel in northeastern North America. Its ability to parasitize a variety of different host fish, inhabit both flowing and standing water, and withstand many forms of habitat disturbance and environmental pollution have made this species so common. It often greatly outnumbers all other mussel species, and may comprise the largest proportion of animal biomass in many lakes and rivers, often far exceeding the combined biomass of other invertebrates and fish. It is a staple food item for muskrats and otters.