Size: Up to 1.5 inches, though usually around one inch.

Shape: Somewhat triangular or “wedge-shaped” at the posterior end, which is sometimes pointed. Adults are small and often exhibit much more shell erosion than comparably sized juveniles of other species.

Lateral Teeth: Present but thin. Two on the right valve and one on the left valve, which is the opposite of all other North American freshwater mussel species that possess lateral teeth.

Pseudocardinal Teeth: Present. Two on the left valve and one on the right valve.
Nacre: Color usually bluish-white and somewhat iridescent along the posterior margin, sometimes with greenish or yellowish markings toward the beak cavity. 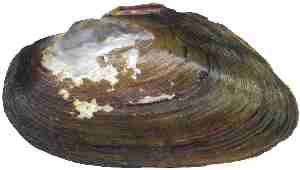 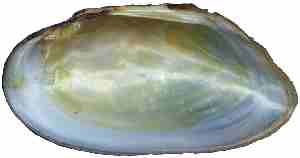 Habitat: The dwarf wedgemussel is found in streams and rivers, where it prefers stable substrates in slow or moderate currents. In slow moving, sandy rivers it is often found near the banks among roots.

Conservation: This is the only federally endangered freshwater mussel in New England. Historically, it was found in nearly 70 locations in 15 watersheds along the Atlantic seaboard, but its range and population sizes have dramatically decreased in the last century.