Pseudocardinal Teeth: Present but extremely reduced—they are very simple swellings that are sometimes difficult to discern.
Nacre: Color usually white or bluish-white, and often yellowish-green toward the beak cavity.

Often Confused With ... The creeper can be confused with several other species, and it is important to examine the key features of all these species before making a positive identification. They include the eastern elliptio, brook floater, triangle floater, alewife floater, eastern floater, and dwarf wedgemussel. 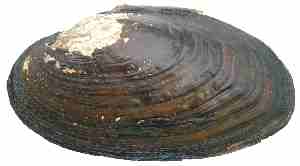 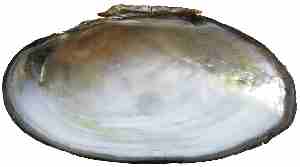 Habitat: The creeper only inhabits streams and rivers, and prefers sand and gravel.

Conservation: Although the creeper appears to be doing well in Connecticut, it shares habitat with other listed species such as the brook floater and dwarf wedgemussel, and experiences many of the same environmental threats. Careful monitoring is needed to understand population trends in Connecticut. It is listed as special concern in Massachusetts and Maine.