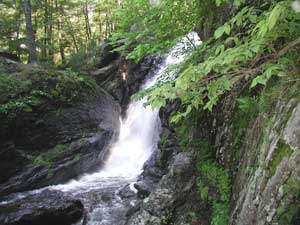 The easiest way to access Campbell Falls Parking is to park along Campbell Falls Road and walk 0.14 miles down the trail. If you start there however, you will miss a casual walk through a very nice forest, and some interesting rocks. This geological description assumes you start at the parking lot along Tobey Hill Road, on the yellow trail.

Whichever way you walk to see the falls, you will notice some concrete columns before going down the hill. They are boundary markers between Connecticut and Massachusetts, since the falls are located in Massachusetts. 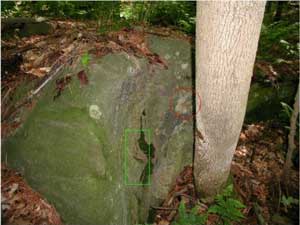 Just after crossing the first bridge, look for a boulder to the left of the stream (Figure 1). This boulder was left behind when the glaciers melted out of this area about 15,000 years ago. Much of it is covered with ferns, moss, lichens and pine needles, but on the vertical face you can see that the rock is medium gray with bands of light, and dark minerals. Behind the tree, a lens of slightly orange quartz sits next to a fold in the rock. Because the minerals in the fold are slightly more resistant to weathering than those around them, the fold stands out, an example of differential weathering. Look for more examples of differential weathering in other boulders and outcrops in the park.

The park is covered everywhere by glacial till. This is unsorted material ranging in size from silt, sand, pebbles, and cobbles, to big boulders. If digging in your yard yields rocks that are generally rounded, you probably live in a till area. Valleys are more likely to be filled with stratified drift, generally sand, and gravel. This is material the melt water from the glaciers carried into the low areas. There you would find fewer boulders when you dig. These are the places where sand and gravel quarries are located. 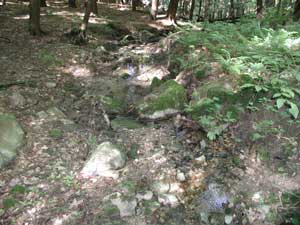 Figure 2. Erosion of streambed, looking downstream. The bank is being undercut on one side. The boulders are partially from the eroded till and partially carried downstream during higher, faster moving water.

When you reach the third bridge on the trail (not all are marked on trail map), stop and look at the stream on both sides. This is a good example of erosion. The water moves rapidly here, because the hillside is steep. This moves a lot of both small, and larger material (Figure 2). 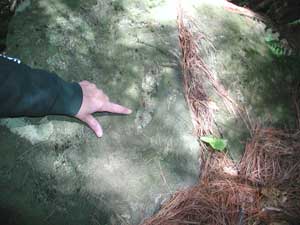 Figure 3. Finger points toward largest quartz boudin in rock. Several others can be seen over the hand.

Continuing down on the trail, look for the second boulder on the right. The trail side is nearly straight and vertical. Look for white boudins on the south side . These are quartz lenses that were stretched during plate collisions in Connecticut's early history, forming sausage shapes (boudin is French for a type of sausage) (Figure 3).

Figure 4. Folds in a rock. The light and dark bands in the rock make this a rock named gneiss. The folded fractures probably separated as a result of frost wedging, the freezing and expansion of water in fractures. See if you can find other examples of frost wedging along the trail.

Next to this rock is another with folded fractures (Figure 4). Frost wedging probably formed these fractures. On warmer winter days, water seeped into the fractures and froze, expanding the rock a little during each freeze, and enlarging the fractures. The fractures follow the folding in the rock.

Continue on to the falls, passing the concrete pillar showing the border between Connecticut and Massachusetts. After a good rain, the falls are spectacular. They are probably less so during droughts. 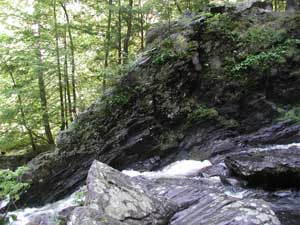 Figure 5. The rocks across the water are nearly vertical, while the rocks on this side of the stream, do not dip as steeply.

The rocks across the stream (The Dalton Formation), along the lower falls are standing nearly vertical (Figure 5). 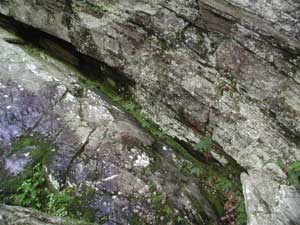 Figure 6. Beginning of fold on trail side of falls. Here, the fold is not nearly as steep as on the other side of the river.

But if you look at the rocks on this side of the stream, you'll notice that they are not dipping nearly as steeply. There seems to be a fold here with one limb much steeper than the other (Figure 6).

The rocks at the falls and in all of the park are granitic gneiss. They were once molten rock in a magma chamber deep beneath the Earth's crust. Very slowly, probably over millions of years, the magma cooled and crystallized to form granite. Then, as Europe and Africa were colliding with North America, these rocks were again heated and under very heavy pressure. The rocks did not melt, but over a long time the atoms in the minerals rearranged themselves into a crystal structure more compatible with their new environment. The mineral grains arranged themselves into bands of the same mineral, resulting in the banded rock you now see, a granitic gneiss. 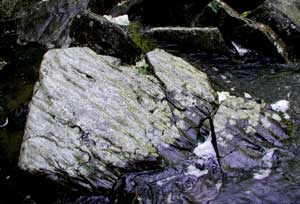 Figure 7. The apparent ripples in this stream rock are probably due to the softer minerals weathering out of the rock faster than the more resistant ones. See how many rocks like this on you can find below the falls.

Look around at the bottom of the falls and you will see rocks that appear to be rippled. Although these look like the ripples you might find in a stream, these are probably the result of differential weathering - the softer minerals are being removed faster than the harder, more resistant minerals
(Figure 7).